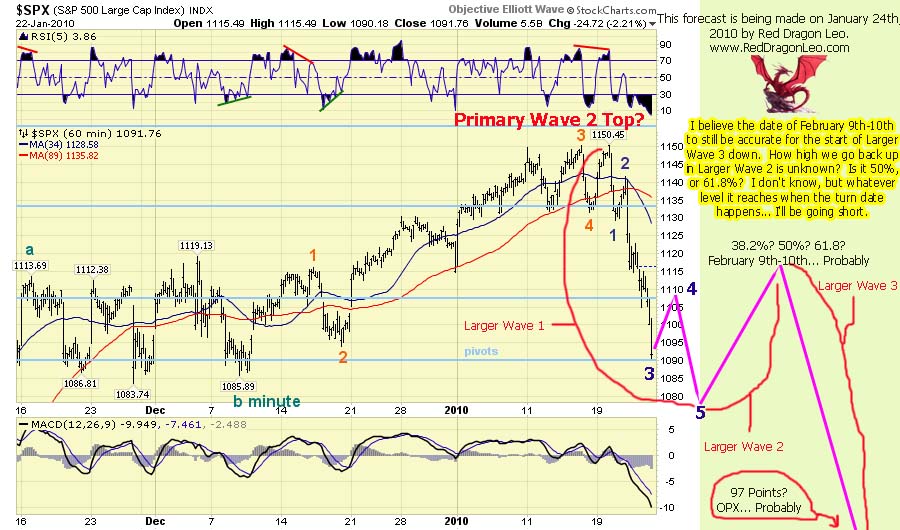 It looks like the tide has finally changed!  There is no doubt now that this market has officially rolled over, and is heading down!  I have to say that this took me by surprise.  I really expected them to pull it back to 1115 spx and then rally one more time into 1160-1180 area. But,  I don't see that as possible now.

Why?  Because the tables turned on them when Scott Brown won the Senate race in Massachusetts.  That state has been a Democratic state since 1972, withTed Kennedy leading it.  He has been a very powerful voice in the Senate all those years for the Democrats, and now he's replaced by a Republican.

I now see how important that is, as I didn't put the pieces together last weekend when I charted out my forecast.  I never realised how critial that seat was.  Obama's Democrats aren't in control of the Senate anymore, and this puts his health bill at risk, as well as any other agenda that he wants passed.

This has changed the "Grand Plan" that the "power's that be" wanted.  They... I believe at least, wanted to take this market higher into the February 9th-10th time frame.  Why?  Well, not too sound like anymore of a conspiracy theorist then I already am, but I'll go ahead and spill the beans now.

What happens with these crooks is that they decide well in advance... which direction to take the market, and for how long (you should already know that... if you've been reading this blog for awhile).  They can do this because they manage to get key positions filled in politics, with one of their buddies (aka Ben Bernanke and Tim Geithner... both former Goldman Sachs boys).  This allows them to get free money (aka the TARP funds), and to get policies and laws changed to allow them to profit more.

This isn't only about "buying up their own stock" with the TARP funds, and then issuing new shares to the retail public at the high in the market, and then taking the money and paying back the TARP (aka... our taxpayer money).  Oh NO, that's not good enough for them.  They profit from it in both directions!  Yes, the decide when to "Tank" the market too, and steal the money from the average retail investor's 401k or pension fund money too.  Lot's of "Insider Trading" and secret payoff bonus checks for "service's rendered"... whatever that is?

They are well organized and plan everything in detail.  They set up these Annual Summits where they all meet and "cash their checks"... so to speak.  Basically, they funnel all the profits they've stole from the un-suspecting public through the Vatican and into "out the country" bank accounts.  The next annual summit is being held on February 4th-6th, 2010.  In the past, after every summit (within a few days), the market has started a huge sell off.  I know this all sounds kind of "Cloak and Dagger" stuff, but the fact it continues to happen should tell you that it's real.

Essentially, the checks all clear on the following couple of days, and then the market tanks.  They release some kind of news event to cause it to sell off.  It could be anything?  I think that they had planned for Obama to release his "We're going to get tough on the banks" speech on either the 9th, or 10th?  But, losing the senate seat to a Republican forced him to move up the time line.

The one thing I didn't see when I made my forecast last week was how serious it was when Scott Brown won.  I'm sure the death of Ted Kennedy wasn't planned, but it did happen... and that changed the plan.  So, does that mean that I don't see the market crashing on February 9th-10th?  Not at all!  In fact, it sets up the perfect "Wave 3" down after a nice corrective wave 2 back up to occur over the next 2 weeks.

Looking at this 60 minute chart of the SPY, I think we just finished a wave 3 down inside a larger wave 1.  That means that Monday and maybe Tuesday should produce a wave 4 up, and then one final wave 5 push down into the end of next week.  The target is 1080 SPX.  After that, we should have a larger wave 2 up... hopefully into the time frame window of February 9th-10th.  That allows the crooks to get their checks cleared on Monday the 8th.

I expect some bad news to be released or some bad event to occur that will trigger the larger wave 3 down.  This is the one that could go down 97 points on SPX, as I talked about a week or so back.  I don't know if that is going to be accurate, but it wouldn't surprise me if it was.

That larger wave 3 down should take us into the options expiration date for February.  At that point, I'll have to look at where we finally stop at and see if that whole move down from 1150 spx is more likely a ABC, which would end it there, or a 5 wave move, which would mean that it will fall further.

If it's a 5 wave move, then we should go up into a larger wave 4 starting the week after opx.  That might take until the end of February or so, and then finally a larger wave 5 down into early March.  But that is all just guessing at this time.  We'll have to cross that road once we get there.  For now, let's focus only on the 2-5 day corrective larger wave 2 from the expected 1080 low coming.

I do think that it will be higher then we might expect, as the bulls aren't quite dead yet.  Some news event to spark a rally is all that it will take.  Maybe they will re-elect Ben Bernanke, and the market will use that excuse to start the rally.  Of course it will also start big bear squeeze on all those caught short at 1080, which could push it higher then I expected?

Again... I will still be looking for the major turn date about February 9th-10th.  That's one of the best opportunities of a lifetime... the absolute best one will come in about a year or so.  But for now, catching a larger wave 3 inside of a Primary wave 3 inside of a Major wave 1 (the entire 5 larger wave move from 1150... to maybe 920 area?)  is still extremely powerful, and profitable... if you're on the right side?

Of course after this big move is over in late February or early March, you should expect a long drawn out choppy Major Wave 2 to take us though the summer months.  Look out for September though... (keep all windows in high story buildings locked, or you might have someone jumping out one?)