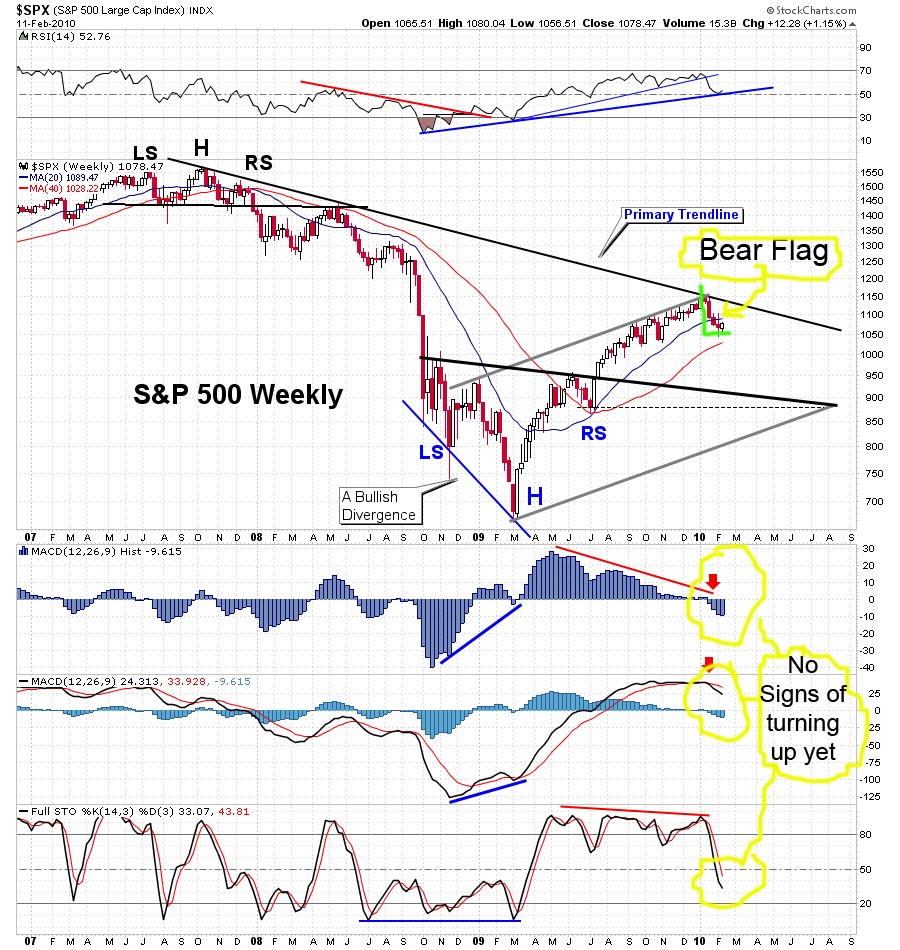 Man that hurt today!  I am so ready to bail on my position... that is now largely underwater, but just when I do... this market will tank!  So, I really had to bite my tongue and hold my fingers away from the panic button today, as I was very close to bailing out.  But, this stopped me...

As you can see, the moving averages have rolled over and are still pointing down.  This is totally different then the last 10 months or so, as they were pointing up then.  This is the real deal!  This market has HUGE overhead resistance pointing down on top of it.  It's simply can't run up too much further.  The question is... will it sell off before this option expiration?  I believe it will.  How far down?  At this point, I think 1044 is definitely likely.  The next level at 1020 will be hard to break before opx.  It could happen, but I just don't know right now.  That means that the 980 level has a low chance of hitting.  It's possible, but odds are against it now.  Panic would have to set in probably, so I won't rule it out.  Remember, the market falls a lot faster going down then up.

I have now changed the Elloittwave count, as to the market still being in Mini Wave 2 up, of larger Intermediate Wave 3 down, inside larger Minor Wave 1 down.  This is one of the things I don't like about EW, as you always have to change your count.  Just when you think you have it figured out... Bam, it expands out to a longer wave, or changes direction.

That's why I look at the Technical Analysis first, and then try to forecast the waves that we are in.  I think EW is pretty good on a larger scale, but the smaller one's are hard too determine.  Ignoring EW on this chart, and just focusing in on the TA's, I see a Bear Flag from the sharp sell off on last Thursday to the 5 days of sideways to up consolidation that is currently underway.

You can also see that the UP Volume today was only 221.4 Million.  Where are the Big Institutions?  They didn't do any buying today... did they?  It looks like they did do a Lot of Selling last Thursday... look at that DOWN Volume... HUGE!   Notice that every time we had a big down day, there was also big volume.  Now I know that the entire rally up from the March, 2009 low was on light volume.... but, the Monthly and Weekly charts were supporting the move, as they were both point UP!  Where are they pointing now?  You guessed it... DOWN! 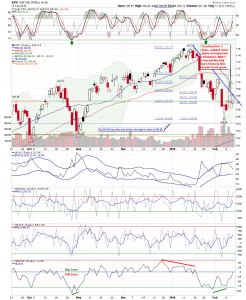 That's the BIGGEST reason that I didn't bailout on my short positions today.  Yes, I'm underwater badly on them, but the chart still tell me that a big sell off is coming... and before OPX!  Notice the downward trend line that Cobra drew on his chart.  As you can see, the Bulls could break through it.  By the way, Cobra's link is on my blogroll, and you should visit his site, as he is excellent with his TA work.

Next up is the 60 minute chart from the chart pattern trader.  Of course I've added my notes on it, (his link is also on my blogroll).  You can see that the MACD still hasn't rolled over.  It almost did yesterday, but it turned back up and is still going up.  The Full STO is above the 80 level and looking like it wants to turn down.  These indicators can sometimes remain in overbought or oversold territory for longer then you want them too... eating away at your options. 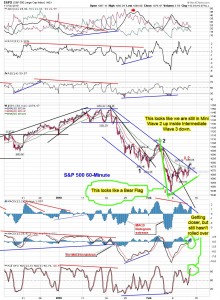 The downward channels line were broken today and that is also of big concern.  Will they fall back into the channel, or is this a real breakout?  I have to focus on the volume behind it, and I don't see it going up too much further.  There just isn't any good news left to move it up.  Low volume up moves worked well when the Monthly and Weekly charts were supporting the move, but they are now pointing down.

That's my primary reason for hanging on in this Bear Squeeze.  Good ol' Dad and the older brother aren't around anymore.  My only fear right now is the Daily chart below.  It looks like the MACD is rolling back up.  Now again... it's just like the 60 minute chart, as it too... could turn back down just like the 60 turned back up.  Remember, it looked like it was going to rollover, but hooked back up today.  The same thing can happen to the Daily chart.  It could turn back down just as easy. 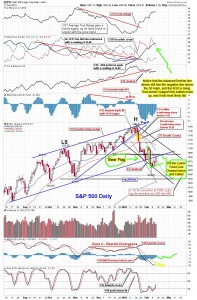 The good news is that it hit the lower channel trendline and couldn't get through it.  That's called a backtest, and as you can see, this is the second attempt at trendline... with it failing both times.  I'll admit that the market could continue a slow grind up... walking the trendline, and not go down until after opx.  But, I really think it's running out of time, and energy.  Too many resistance levels overhead, and too many trendlines from different sloping channels.  This market is dying, and it just hasn't proven to me that it can stay up here very much long.

I'm not just being stubborn here folks, the charts just don't support the up move.  If they did, I'd be bullish, and go long.  Now yes... I'm a bear at heart, but I will trade the long side if the charts support it.  They don't... at least what I'm see doesn't.  The daily chart is the only chart that is still neutral, and looking bullish.  But, until those MACD lines cross, I'm unconvinced.  The larger weekly and monthly charts tell me that the MACD line will roll back down and allow the chart to put in 3-4 lower histogram hills, with each hill getting smaller until they crossover into positive territory.