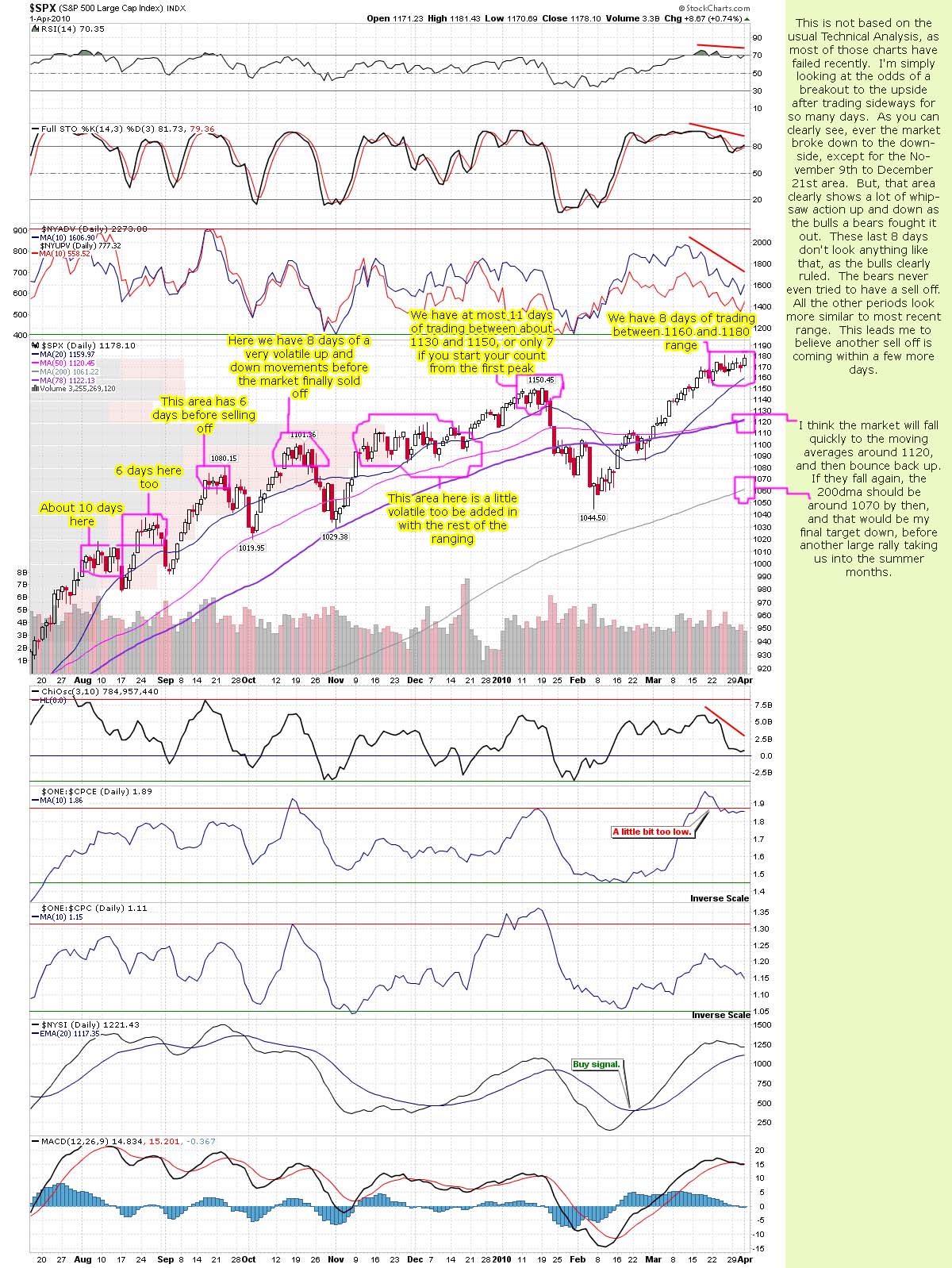 All signs point to a correction to start next week... but will the government allow it?  Just looking at the chart below (found on Cobra's blog), and counting the days that we have been in a sideways channel, you will notice that the number of days are about the same as all the previous sell offs. 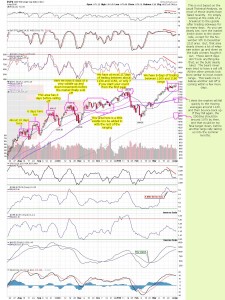 This is not based on the usual Technical Analysis, as most of those charts have failed recently.  I'm simply looking at the odds of a breakout to the upside after trading sideways for so many days.  As you can clearly see, every time the market broke down, except for the November 9th to December 21st area.  But, that area clearly shows a lot of whipsaw action up and down as the bulls and bears fought it out.  These last 8 days don't look anything like that, as the bulls clearly ruled.  The bears never even tried to have a sell off.  All the other periods look more similar to most recent range.  This leads me to believe another sell off is coming within a few more days.

I think the market will fall quickly to the moving averages around 1120, and then bounce back up.  If they fall again, the 200 dma should be around 1070 by then, and that would be my final target down, before another large rally taking us into the summer months.

Now, does that mean it will sell off on Monday?  Not necessarily... but it could?  I really doubt it though, as the jobs' number's were bad, but not bad enough to cause huge selling on Monday.  Remember, most Mondays' are bullish, and without some global political event happening, I do expect another low volume day on Monday.

I think the event we are looking for is the Fed Meeting.  A surprise raise in the discount rates for the banks is what I expect to be blamed for the sell off.  Of course this could be the one exception, and we could have a break out to the upside.  The odds are that the next move will  down, and playing the odds is about all we can do in this crazy market.

I'm not going to go over all the other TA's, as they haven't be accurate lately.  We all know by now that the markets can stay in overbought or oversold conditions for a lot longer then what they appear too be by using the MACD's,  Stochastic, and various other charts.

Instead, this weekend update is simply about the number of days the market has trading in a range before making a move out of the range.  I could see another couple days of sideways movement before any move down starts (at most).

Looking a little deeper into the past moves downs, we see...

Notice that every time we had a "rally up to squeeze out the last bear"... just before the down move started.  Did we have that "rally up" on Friday?  Possibly, as we did squeak out a new high... which was also done on just about all the previous times too.

Also, notice that most of the sell offs were started later in the week, with 2 on Wednesday and 2 on Friday... and only one on Monday.  So, it could start on Monday... but I expect it to happen later in the week with some news that the market doesn't like.

What is the news?  Who knows?  I suspect the government will be at the root of the news though... not just bad earnings on a few companies.  So, I'm playing the odds, and that tells me that a sell off is the most likely path next week.

Best of luck to all of us... in this Casino we call the Stock Market!