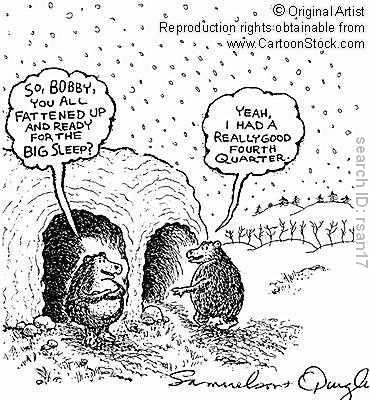 Is it time for the Bears to go back into hibernation?

Yesterday I called for the 1070.50 spx print to be hit, and it did exactly that today.  But, will my call for a sell off tomorrow be right?  I doubt it, as my luck isn't that good.  I may get a few calls right from time to time, but tomorrow looks quite bullish right now, so calling for a big sell off is probably just wishful dreaming on my part.

The daily chart is pushing the market up hard, from oversold territory.  It's about to cross over the zero level on the histogram bars... quite bullish.  It could easily last until opx next Friday... or longer?  And, it could just as easily roll back down tomorrow too.

There is no way of knowing how high it will go, with regard to putting in higher histogram bars... which should make a higher price on the overall market too.

The 60 minute chart is overbought, as the daily keeps pushing it back up every time it tries to roll over.  The 15 minute chart has already dipped below into oversold territory and is now coming back up now.  That's what caused the run up into the close, as the 15 finally curled up and crossed back above the zero level into positive territory again.

Overall, tomorrow looks very bullish with the daily and 15 minute chart ready to push the market up to the next level.  The 60 is overbought though, which could limit the upside, and in fact it could make the day just trade sideways as the charts aren't all lined up together pointing in the same direction.

Honestly, I don't see much hope for the bears right now.  The light volume will keep the market from selling off hard.  I think a big news event is needed to bring the market down now.  What could that be?  I don't know?  Maybe nothing, as they may want to take it up to 112.41 next week first, before they sell it off.

To sum it up, a slight down or flat day is bullish as that would just be a pullback in a move up higher next week.  A gap up and crap could be very bearish though, as that might indicate that the sell off has started.  The last hope for the bears tomorrow is a hard sell off... one that would make the bulls bail out, that just went long.  But, I just don't see it in the charts.  Sorry about that (I really am, as I'm short the market... so I'm a bear right now).

So the bulls have the ball for now, with 4 downs to go... at the bears' goal line.  The only hope for the bears is a fumble.  (Let it rain, snow, and hail down tomorrow on the field... go bears)