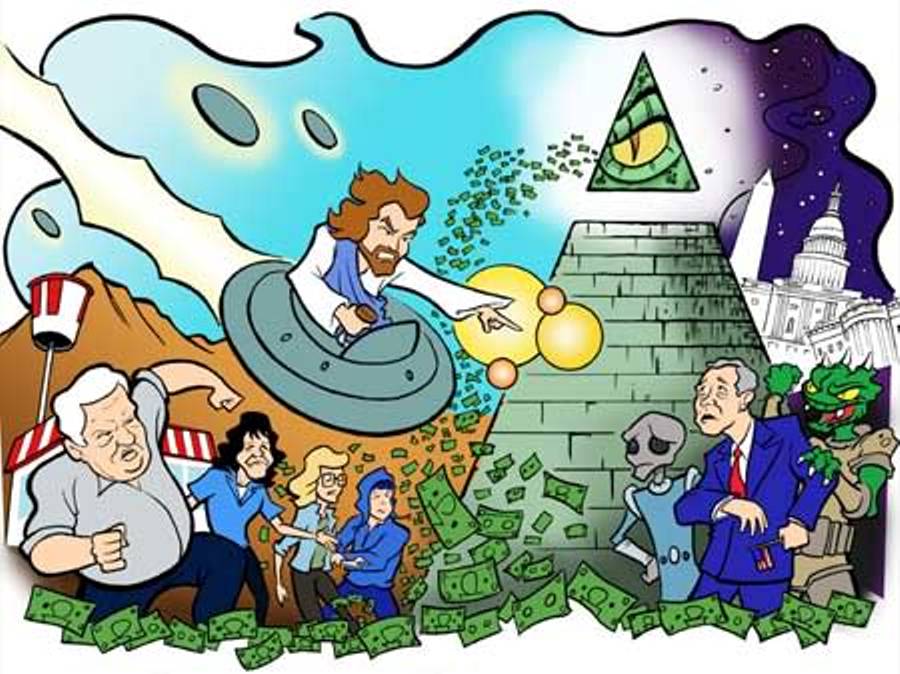 Wednesday Update:  Our FP on the DIA of 118.16 has been hit and is now fulfilled.  Primary Wave 2 is likely done now.  Welcome to Primary Wave 3!

So close, but no cigar! But are we playing horseshoes?

Friday's close at 117.77 DIA was disappointing, as I really expected it to tag our upside target of 118.16 and then open on Tuesday with a nice gap down. While that's still possible, the odds are against it... from a historical point of view. All most all of the cases in the past, that had a long white solid candle pattern, had at least a quick break up above the close on the next day the market was open.

Which means that the odds are that the next candle will go above the current closing price at some point in the day. While we could still open down a little, it is likely that the market will rally back past the 117.77 level and go above it at least a little bit.

In almost all cases, this has happened. So, what we are now looking for is a quick gap up (to the 118.16 level hopefully) and then a sell off the rest of the day, putting in a long "topping tail" candle pattern.  Will it happen like that?  Who knows?  Odd's are against it...

I did go short anyway, as we were so close that FP, that I didn't want to chance a gap down on Tuesday without being short. I know we didn't hit the target exactly, and I'll probably be kicking myself next week for not waiting for a better spot... but I'll survive.

Regardless of not catching the exact top, next week is a bull's worst nightmare... at least from a historical point of view. I'll refer you to Cobra's chart on that, as he does great work with prior data, and history.

Everything is now lining up perfectly for a very nice sell off in the market.  From every Technical point of view, to historical data, put/call extreme ratio's, sentiment reading, and of course the FP on the DIA... it all spells "TANK", which should make every bull worried.

I've actually been pretty well disciplined the last several weeks, as I've set out all this sideway garbage (which would have killed any option's players like myself).  While I still expect the DIA print to be hit, I just couldn't risk the the possibility that  I've given it too much exposure, and the print not being hit this time... so I caved in and went short (kicking myself if we go higher on Tuesday).

Anyway, this hasn't been easy on the bears, in fact many bears have fallen prey to the evil bear hunter Elmer Bernanke, who used too hunt only rabbits, but move up to larger game after finally killing bugs bunny I assume.

But, some did survive... and I am one of them.  While wounded, I'm still alive (and hungry), and I've learned enough to avoid being shot by the evil hunter.  The hunter has now entered bear territory and I believe he's running out of bullets.  Next week we bears will make a sneak attack on the hunter, and hopefully shove that shotgun of his up his you now what!

Looking at the news, Richie caught a very interesting article that may confirm my suspicions on Wikileaks.  As I'll stated previously, I think that the gangsters either fully control Wikileaks, or are using them to release damaging data on a timeline that marks the top of the market.

While I still don't know whether Julian Assange is a hero (if so, he's also be a "patsy" for new laws to censor the internet), or a plant by TPTB?  Either way, the release of the data seems likely to happen at the top of the market as I expected.

This article "could be" the "event" we've all been waiting for... to tank the market!  You should always remember too be cautious of any and all news that is reposted heavily in the Main Stream Media (msm), as that area is still in control by TPTB (the powers that be).

Since Wikileaks has gotten a ton of news media coverage by the MSM, you should have your "Dangling Carrot" eyes open, as the MSM is there for one purpose... to distract you, mis-inform  you, and mis-lead you.  There is always a hidden agenda behind what they tell the sheep watching.

Remember, George Soro's his helping Julian Assange with legal fee's and funding Wikileaks.  It's hard too stay clean (Wikileaks) when you are rolling around in the mud with the pigs (George Soro's).  But for now, I'm going to give Assange the benefit of the doubt, and still say that he's a HERO (but not a bright one... if he doesn't know he's being used).

For us traders though, we just need to focus on the FP's and try to tie them together with the possible news events that could trigger the next sell off to happen.  In this case, it's looking likely to be Wikileaks and not a "false flag" event (like a nuclear bomb... aka "the Simpson Video").

I'm much happier that it's just some economic event and not a physical one, as I don't want to see people die for the market to sell off like it needs too.  Instead, I'd love to see the gangsters exposed and hopefully arrested, convicted, and publicly hung for crimes against humanity.  (Wishful thinking here)  Although it does say something in the bible about people losing their heads in the end time, I think? (could be wrong on that?  Maybe that was a Nostradamus prediction?)  Let's hope it's the banksters and not the sheep.

Anyway, we are now within 39 cents of hitting the FP on the DIA.  I expect it to be hit next week (probably Tuesday), and for the top to finally be in.  This should end the Primary wave 2 up from the March 6th, 2009 low of 666 on the SPX.  What follows should the the nastiest move down in the history of the stock market... even surpassing the first Great Depression in 1929!

Once it finally bottoms in the coming years, I expect hyper-inflation to rocket this market up well beyond the current high, probably hitting 20-30,000 on the Dow... while Gold hits our FP of 3500!  But, that's a few years away from now.  Looking more short term, I'm expecting a nice move down next week... how far, I don't know?

There are a lot of people long in this months' coming expiration next Friday, which leads me to believe it will be at least the 1260 area, if not 1240.  I can't see them paying off all those calls, as you know how they like to pen the market at a level that they pay out the least amount of people... both on the calls and the puts.

While I don't know the numbers of calls/puts, to determine the "maximum pain" level, I do expect it to be much lower then the current closing price on the spy.  All I can say is that everything favors the bears next week.  If we fail here, then it's clearly never going to go down! (Kidding there... you know it will correct at some point).

This will be tough on the bears though, as we all know how they like to fool us.  They sell off just enough to get the bears licking there chops, thinking that it's going to crash... and BAM, squeeze time!  So just be sure to exit your shorts when you get a nice profit, which should be at some good support level too.  You can always re-enter later.

This could play out with a small correction down next week, and then back up into the Legatus Pilgrimage date... followed by a much larger move down.  So be prepared for some wild swings, and don't get married to your shorts.  Exit with a profit, and don't wait for "the big one", as you'll likely be whipped out before it happens.

I'll let everyone know when I exit as well.  I'll be looking at the charts to tell me when the market is heavily oversold and due to rally.  I expect that it will end the coming week down nicely, which will be a nice exit point before the coming weekend.  You know how they like to trap bears on a "rare" Friday sell off, by squeezing them out the following Monday.

So, should we sell off most of next week, and into Friday too, I'll likely exit my shorts before the weekend.  Nothing goes straight down, especially in the early stages of a correction.  When we hit the Wave 3's of 3's of 3's... then yeah, it's going straight down!  But until then, be on the cautious side and take profits when given.

720 million ounces contracts out on Silver (again, as of now... currently)

Quote:  "It wouldn't surprise me one bit if Silver was $50.00 an ounce by February the 1st" (Lindsey Williams)

On another note, several people caught this print showing that the FP of DIA 118.16 could have been fulfilled? 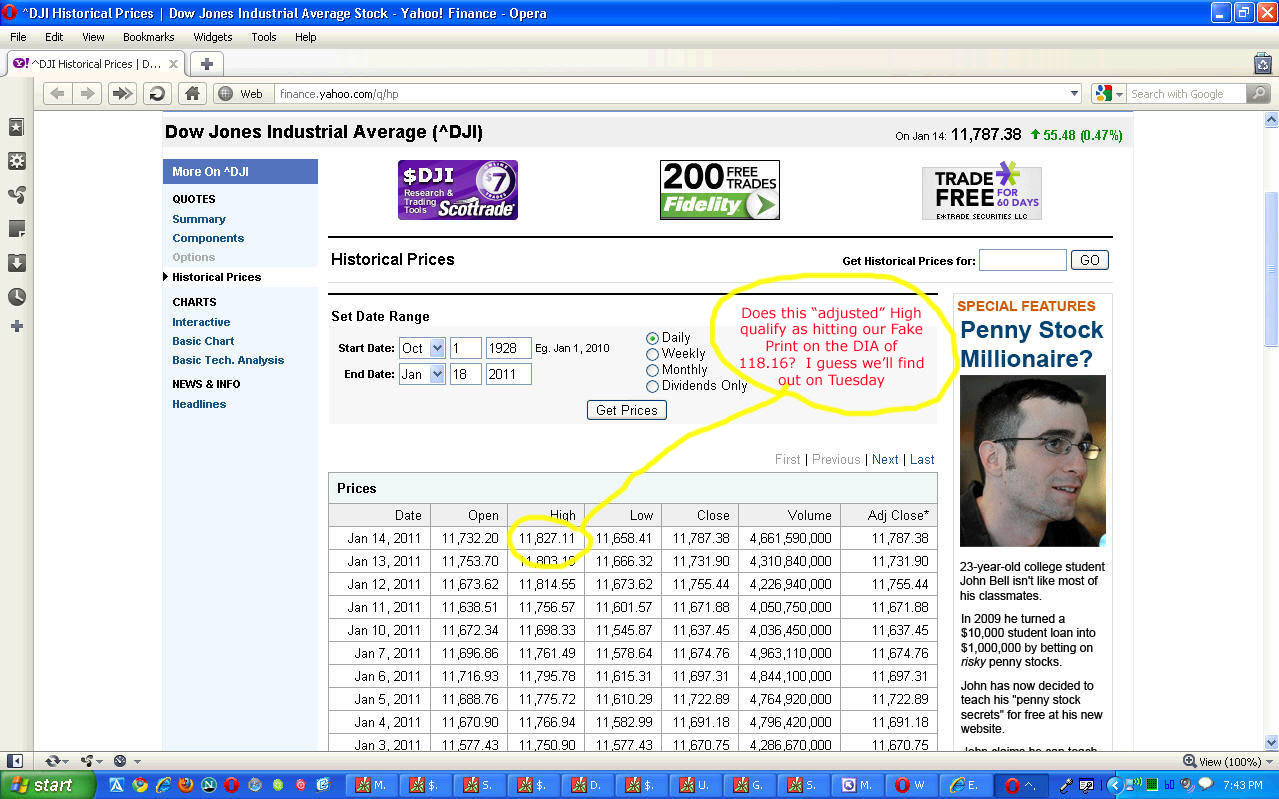