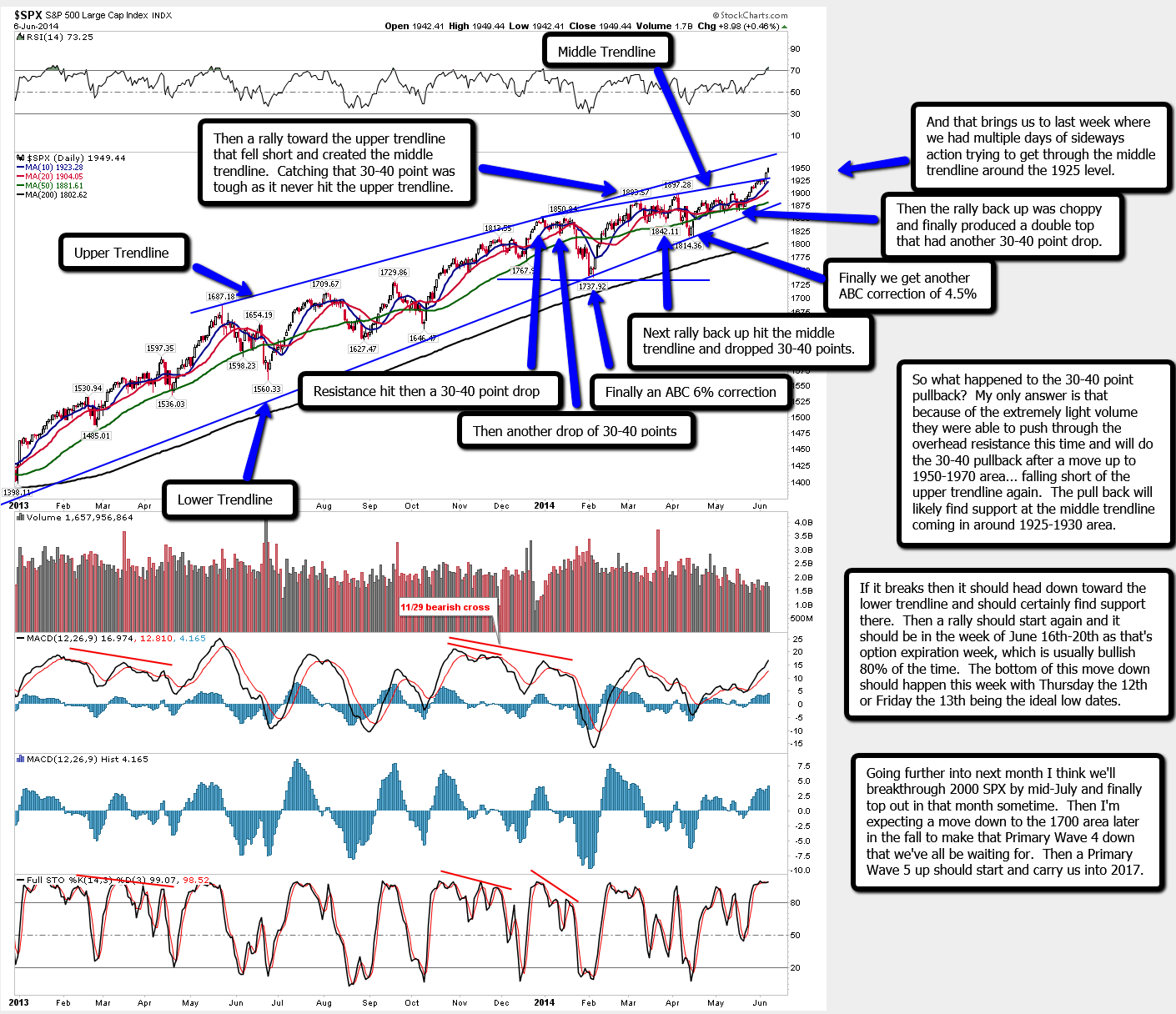 The market is currently experiencing some of the light trading volume days I've seen in a very long time.  It's preventing the bears from having any pullback at all.  While we "should" have had a 2-4% SPX pullback recently it just hasn't happened and doesn't look like it's going to happen anytime soon.  Possibly we'll get some "one day wonders" of 20-30 points down in the near future but I wouldn't count on it.  The old saying is "never short a dull market" and this is the dullest market around.

I'll go over the charts in the video but any bearish case (and there's a whole lot of them) will probably NOT play out due to the light volume we are having that keeps the market up in spite of everything else.  Some even say it feels like the 1999-2000 run up in the market... just a slow grind every day to put everyone to sleep as it defies gravity and just never has any decent pullback to get long at.  Everyone was forced to chase it... at least until the END!

While I'm not expecting this year to crash like it did back then I am expecting a 10-15% correction later this second half of 2014.  The real crash is around 3 years away I think.  However, I was expecting some pullbacks of 2-4% that I would like to play on both the downside and the upside rally that would follow.  It's just not looking like I'm going to get it until we see some more volume in the market.  We are very far away from all the moving averages below and various support levels, which normally CANNOT be sustained for very long without a correction.  But we are NOT in a "NORMAL" trading period as the volume probably the lightest we've had for the last 5 years or more.

It tells me that the Fed's have instructed the big institutions NOT to sell, which will allow this light volume float up to continue much longer then it should.  It's obviously not the Fed's QE money pushing this market up as they are taking more and more of it out the market at every FOMC meeting, so it's got to be the small retail sheep buying it up here as there's no one left but them.

Lets examine this daily chart of the SPX for a minute... 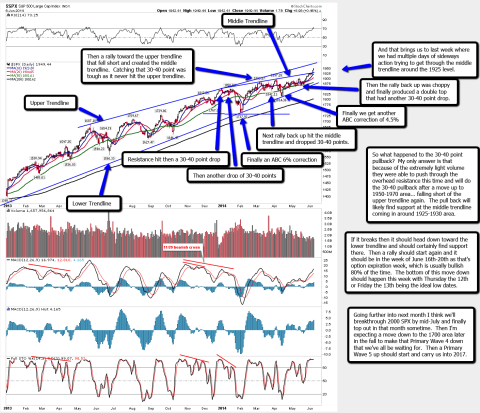 Looking back to December of 2013 you'll notice how the market hit overhead resistance, pulled back for a couple of days (30-40 points), went back up and hit resistance again and then pulled back for a 2nd time for another 30-40 points.... and finally rolled over for about a 6% correction to bottom at 1737 SPX in February of 2014.  Then we rallied up until March before tiring out and after several days of chopping sideways we dropped for a few days... again 30-40 points.

Then back up to peak at 1897 in late March, which was then followed by about a 4.5% correction.  Each time the market dropped to hit the rising trendline of support from 2011 and bounced back up from it.  That's why I was expecting only a 2-4% correction this time as the market was making smaller corrections each time as it was coming to the end of the rising wedge.

This most recent time the market chopped along that rising trendline of resistance in the 1920 area for many days and couldn't get through.  Everything looked similar to the prior 3-4 times except that we were actually more overbought this time thing previously.  So what changed?  Why didn't the market rollover again?  The only answer I have is "EXTREMELY LIGHT VOLUME!".

My best guess is that we continue higher with that next overhead resistance line being the next upside target.  It looks to be near 2000 SPX on the chart but it's hard to tell for sure as it rises every day.  But if there are a lot of bear stops still left after Friday's breakout move then the bulls could put a nasty wave 3 squeeze on the bears and run this up higher then we could believe this week.

However, the more likely scenario is that we backtest the broken trendline of resistance in the 1925 area that will now become support.  This week is usually the pause or down week with the bottom being put in on Thursday or Friday, and then next week is usually the super bullish week as it's the month option expiration week.

With that said I'd look for a long position on a pullback to backtest that broken trendline as the odds are strong that we will now continue higher with 2000+ being the upside target area.  Once we hit that rising trendline (which again is in the 2000 area currently) I could then see a pullback to the middle rising trendline that we just broke out of late last week.  It could rise up to 1930-1935 by then... depending on how long it takes us to first hit the upper rising trendline near 2000.

Catching a bear move is during a cattle drive isn't exactly the easiest thing to do!

One might view this slow grind higher as cattle (the bulls) being driven by some ranchers (banksters) from one coast of America to the other coast with some random bear attacks at night when the cattle are sleeping and the ranchers are passed out from drinking too much Whiskey.  The bears get a few of the cattle but the rancher always wakes up the next morning to protect the herd.

So until these cattle are delivered to their final destination and read for slaughter I'd be cautious on the shorting, and instead you might just want to go long once that middle rising trendline is backtest this week.  My best guess is that we peak out on Tuesday in the 1960+ area and then drop back into Thursday or Friday for the low... which again should only backtest the middle rising trendline that we just broke out of last week.  It should be in the 1930 area by Tuesday but with the 10 day moving average at 1923 we could see that hit to trick the bears by piercing the trendline of "now support" (former resistance) on an intra-day move.

It's common for them to briefly pierce through support and resistance levels I've noticed as it lures in the suckers just before the turn and go the other direction.  I think that area just below 1930 is a good entry for a long into the 3rd week of this month as it's option expiration week and is bullish 80% of the time.  You could probably get long and this Thursday or Friday (June 12th or 13th) and ride it up to that 2000 area which could come as early as by the following Friday the 20th (no guarantee on that time frame though).

Naturally everything I'm speculating on here can change (and usually does... like 100% of the time! LOL), so keep checking the comments for updates as time goes forward as I post any changes there which also get reposted on Twitter and Facebook.

Hang in there bears, you only have another month or so to go...