A rock slide Feb. 26, 2016, on Interstate 75 at mile marker 141.5 near Pioneer, Tenn., forced the closure of the highway in both directions, potentially for weeks. 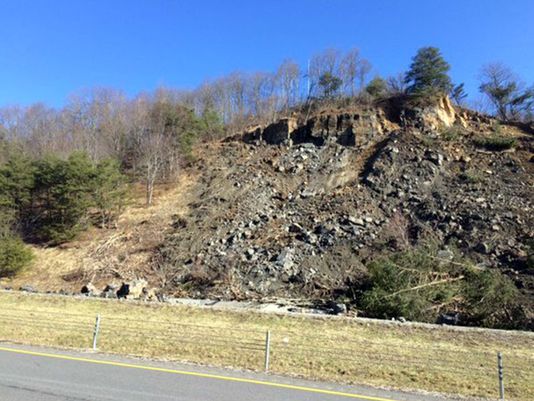 PIONEER, Tenn. — A rock slide Friday on Interstate 75 near here could keep the major north-south artery closed in both directions for weeks, forcing a 33-mile detour, state highway officials said.

While the slide at mile marker 141.5 about 35 miles north of Knoxville primarily affected northbound lanes, Tennessee Department of Transportation officials closed the road in both directions because debris traveled into the median and they need to evaluate the stability of the slope, spokesman Mark Nagi said.

“We won’t allow a roadway to be open to the public if we feel it presents a danger to the motoring public, and right now that roadway is not safe for travel," Nagi said Saturday.

Officials will spend the weekend evaluating the hillside that gave way, he said. No injuries or rocks hitting cars were reported in the 3:45 p.m. ET Friday call to Campbell County officials.

Almost 1.5 inches of rain fell in the area four days before the slide followed by a half-inch the next day, according to Weather Underground records. And rain, close to an inch Tuesday and more than an inch Wednesday, is forecast in the coming week.

Northbound traffic is being shifted to U.S. 25W at the Caryville exit, mile marker 134, and returns to I-75 at Jellico, mile marker 160, Nagi said.

Southbound traffic will have less of a detour, about 25 miles. Vehicles must leave the interstate at the Jellico exit and use U.S. 25W to Tennessee 297 to Tennessee 63. Vehicles return to I-75 at Pioneer Exit 141, the Campbell County Sheriff's Office said.

Trucks with wide or heavy loads are being advised to detour almost 150 miles: Northbound, they should leave I-75 in Knoxville, head east on I-40 and I-81, then take U.S. 25E at the Morristown exit and rejoin I-75 in Corbin, Ky. Southbound heavy-truck traffic reverses the route.