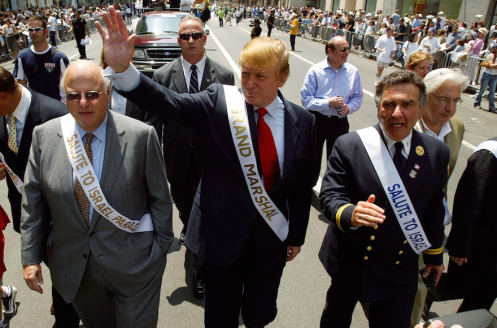 As usual, this is just my opinion, based on private research Readers have been begging me to do Trump, but I don’t think this is what they expected or wanted. Many have been fooled by him. I really don’t have much to say about this bozo actor, except to say that he has been one more test of the gullibility of the American public—a test they have failed. Even those who don’t like him have been fooled into thinking he is real person. He is about as real as Dudley Do-Right or Rocky the Flying Squirrel.

Now I don't know too much about the ranks of those that join the Free Masons but I do know that many high ranking elites are 33rd degree Masons.  But is there a title inside them that is called "Grand Marshall"?  I don't know?

I will say that I don't believe that Trump became a Billionaire without doing something crooked.  Maybe he's not a Free Mason?  Don't know?  But he's well connected to all of the known gangsters out there... whether they call themselves Free Masons Cone-heads , Skull and Bones Idiots, Child raping Catholic Criminals, or Illuminati light bulbs!

This Trump guy is still the lessor of two evils between him and Killary but lets face it... neither are worth voting for.  Where's the check box on the ballot that says "None of the Above"?