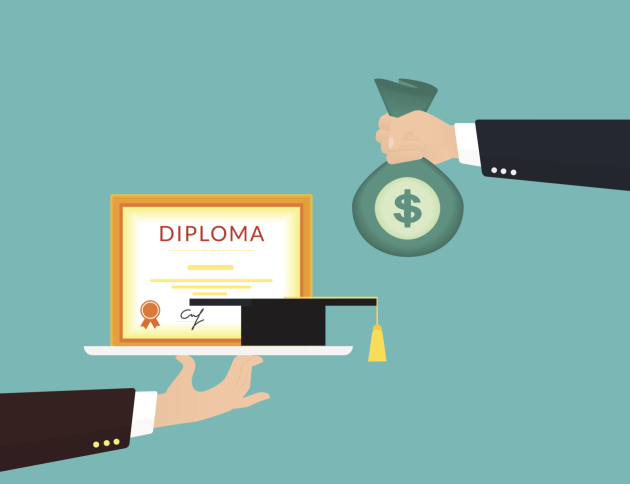 If you have debt, work multiple jobs to pay for tuition and wish college was free, you’re not alone.

A recent Bankrate survey of one thousand people found that 62% of Americans support free tuition at public colleges. And that number is even higher among 18- to 29-year-olds, with 77% in favor of tuition-free education.

It’s no secret that tuition and student debt have been on the rise in recent years.

Between 2014 and 2015, tuition rose 3.6% and 2.9% at private and public colleges, respectively, according to the College Board. Over the past ten years, the increase rate has hovered near 5%. National student debt, meanwhile, has passed $1.3 trillion and continues to climb by thousands of dollars per second, according to MarketWatch’s running counter.

Making college more affordable and student debt less debilitating matters to young voters more now than perhaps ever before, which is why they’re keeping a close eye on the presidential candidates’ prospective policies. 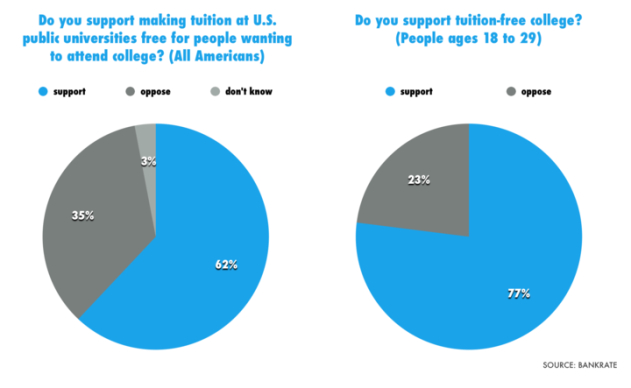 Over the course of five years, Hillary Clinton would implement a system in which students from families with an annual income of less than $125,000 can attend in-state public colleges or universities at no cost. As the program phases out, immediate attention would be given to students whose families make less than $85,000 annually.

Donald Trump, meanwhile, would take government out of the equation entirely and privatize student loans. In other words, he would have banks handle all student loans. This, he argues, would create more competition among banks and relieve pressure on student loan interest rates.

But some students say successfully tackling the issue requires nuanced thinking. While the majority of those who spoke with USA TODAY College are on board with the concept of tuition-free college, they say other economic factors should be considered before putting proposals into practice.

Herbie Bolimovsky, a senior at the University of Rochester who pays $65,346 per year in tuition, says he would feel more comfortable taking a firm stance on a tuition-free system after seeing an assessment of the proposed policy, which he thinks would require extensive economic research and “in-depth studies.”

Rising University of Virginia senior Brandon Brooks comes from a family that earns close to $125,000 annually, per his estimations. He pays UVA’s in-state tuition of $28,924 primarily through student loans and says he “would probably support Congress using taxpayer money” to make free tuition a reality.

Though Brooks says the policy should come with a stipulation that doubles as an incentive: Students must earn a 3.0 GPA to remain eligible. And even then, he still has concerns.

Brooks says he worries students from low-income families wouldn’t get the leg up they need to succeed with a tuition-free system, citing a recent Brookings Institute study that found the middle and upper middle classes would benefit more than the lower classes. This, he says, sets up students from low-income families for lifelong financial struggle.

“You essentially need a college degree to get a well-paying job,” the political science student says.

Alex Greene, a recent graduate of Hunter College ($6,030 for in-state students), agrees that “everyone should benefit” from a tuition-free system, but says he ultimately finds the concept “really problematic.” The current University of Pennsylvania law student says he wouldn’t want to subsidize the tuitions of students who cannot afford college.

And Griffin Anderson, a rising senior at George Mason University, which costs $11,214 for in-state students, says there’s no simple solution to the problem.

“I can understand the argument for tuition free college,” says Anderson, who estimates his family’s an annual income exceeds $125,000. “But I don’t think (college) should be 100% tuition-free.”

That’s because students who pay their way through schools, he says, ultimately “gain life experience.” But if the government were to implement a tuition-free system, Anderson says it needs to make sure “it’s something that we’re going to be able to pay for with whatever tax revenue we’re allocating to it” — in other words, that it’s a “financially responsible” move.

A simple solution to this complex problem may not exist, but Bolimovsky has just one more small request for lawmakers’ looking to ease the financial burden on students:

Jacob Sonenshine is a student at Hunter College and a USA TODAY College correspondent.