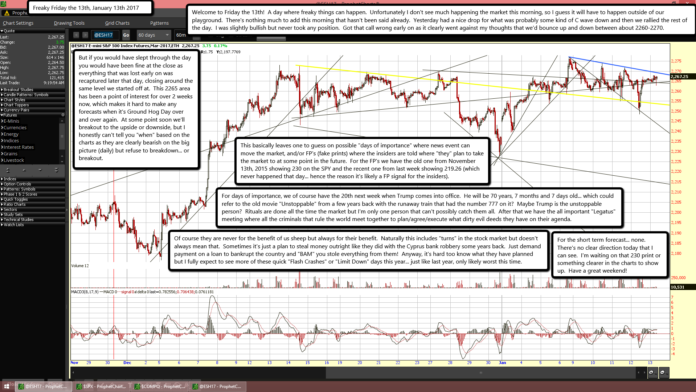 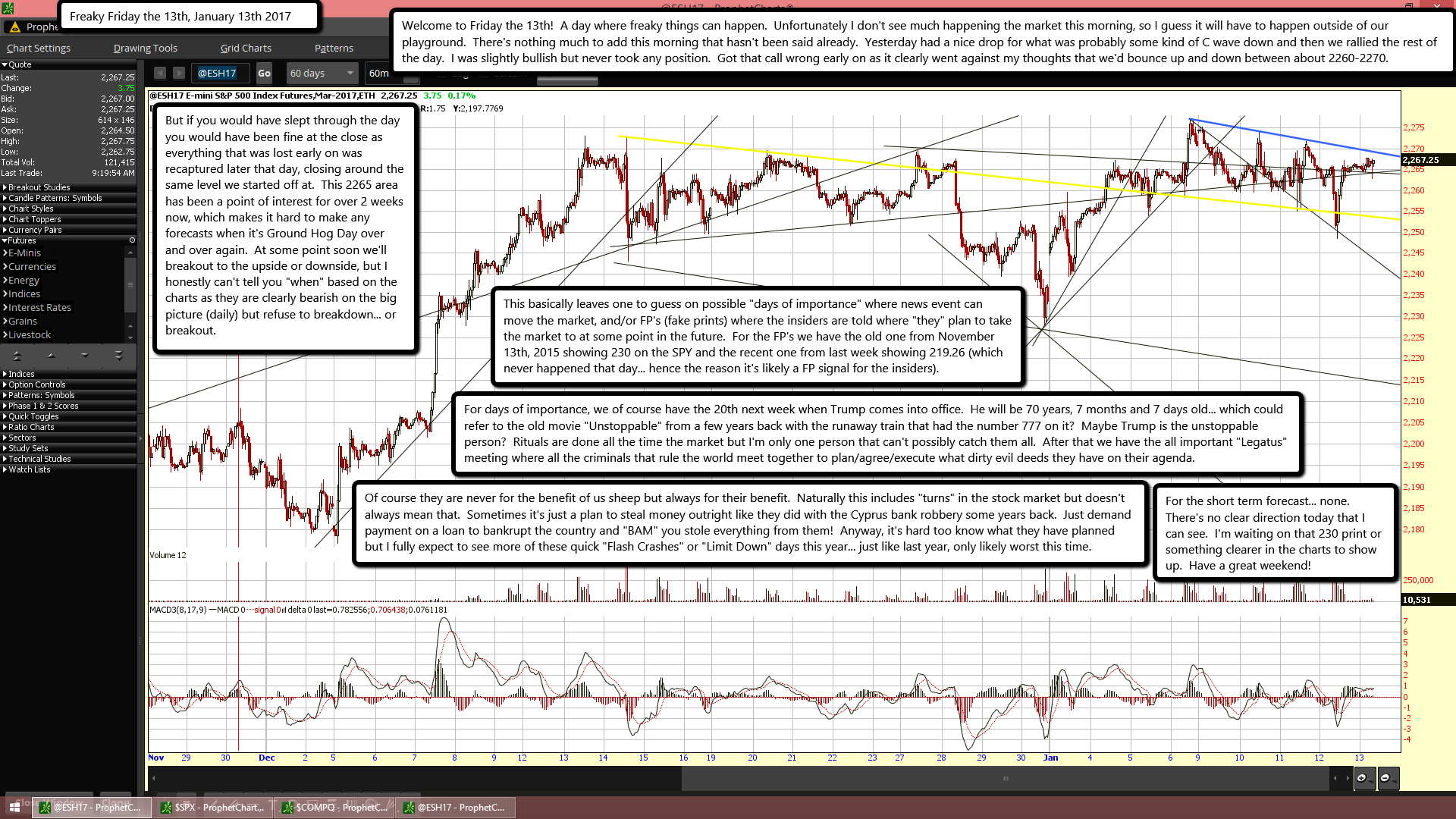 Welcome to Friday the 13th!  A day where freaky things can happen.  Unfortunately I don't see much happening the market this morning, so I guess it will have to happen outside of our playground.  There's nothing much to add this morning that hasn't been said already.  Yesterday had a nice drop for what was probably some kind of C wave down and then we rallied the rest of the day.  I was slightly bullish but never took any position.  Got that call wrong early on as it clearly went against my thoughts that we'd bounce up and down between about 2260-2270.

But if you would have slept through the day you would have been fine at the close as everything that was lost early on was recaptured later that day, closing around the same level we started off at.  This 2265 area has been a point of interest for over 2 weeks now, which makes it hard to make any forecasts when it's Ground Hog Day over and over again.  At some point soon we'll breakout to the upside or downside, but I honestly can't tell you "when" based on the charts as they are clearly bearish on the big picture (daily) but refuse to breakdown... or breakout.

This basically leaves one to guess on possible "days of importance" where news event can move the market, and/or FP's (fake prints) where the insiders are told where "they" plan to take the market to at some point in the future.  For the FP's we have the old one from November 13th, 2015 showing 230 on the SPY and the recent one from last week showing 219.26 (which never happened that day... hence the reason it's likely a FP signal for the insiders).

For days of importance, we of course have the 20th next week when Trump comes into office.  He will be 70 years, 7 months and 7 days old... which could refer to the old movie "Unstoppable" from a few years back with the runaway train that had the number 777 on it?  Maybe Trump is the unstoppable person?  Rituals are done all the time the market but I'm only one person that can't possibly catch them all.  After that we have the all important "Legatus" meeting where all the criminals that rule the world meet together to plan/agree/execute what dirty evil deeds they have on their agenda.

Of course they are never for the benefit of us sheep but always for their benefit.  Naturally this includes "turns" in the stock market but doesn't always mean that.  Sometimes it's just a plan to steal money outright like they did with the Cyprus bank robbery some years back.  Just demand payment on a loan to bankrupt the country and "BAM" you stole everything from them!  Anyway, it's hard too know what they have planned but I fully expect to see more of these quick "Flash Crashes" or "Limit Down" days this year... just like last year, only likely worst this time.

For the short term forecast... none.  There's no clear direction today that I can see.  I'm waiting on that 230 print or something clearer in the charts to show up.  Have a great weekend!