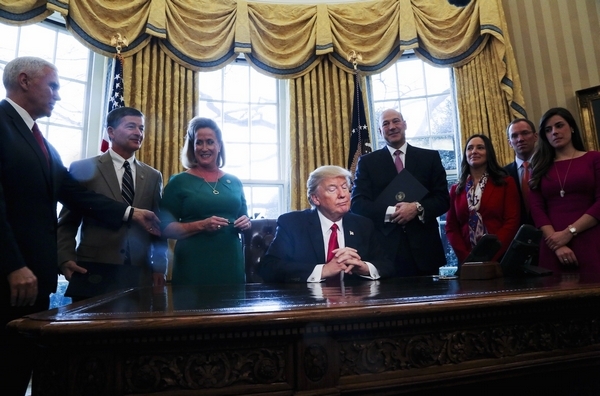 President Donald Trump has promised for more than a year to give banks relief from the Dodd-Frank Act. The moment has arrived.

The Senate voted Tuesday to formally kick off the process of considering a bill that would mark the biggest congressional overhaul of the post-crisis banking law. In the coming days, the Senate is expected to debate and then pass the measure. It will then go to the House, where lawmakers would also have to approve it for it to reach Trump's desk.

The legislation is a compromise, with some Democrats voting to advance it Tuesday. The bill doesn't go nearly as far as many Republicans and some in the finance industry would like, leaving big Wall Street firms in particular close to empty handed. It mostly provides regulatory relief for small and regional banks, including raising the threshold for which lenders are considered 'too big to fail.'

Senate Banking Committee Chairman Mike Crapo, an Idaho Republican, sponsored the legislation and has been working behind the scenes with lawmakers in the House and Senate in recent days to hash out an amendment with some last-minute changes.

Democrats are divided on the bill, with progressives such as Massachusetts Senator Elizabeth Warren arguing it will put consumers at risk.

And it also tells me that it should last about one quarter (3 months) and then we could top out like the 50% up rally from 1986 to 1987... and you know what happened after that!  Yes, we have a serious chance of another crash coming later this year and into 2019.

Because of similar events and similar patterns in the stock market.  Back in 1986 Ronald Reagan passed his tax bill which fueled the stock up another 50% before topping out and then crashing.  Here in late 2017 Donald Trump passed another tax bill and we've been rallying hard now for over a year, starting after he got elected.

Of course there's no rule that says we have to do exactly the same but odds are strong that another strong rally will happen soon and take us into the summer with bulls dancing in the streets.

Beside the tax bill this Dodd-Frank overhaul should add gasoline to the fire as it free's up banks to "take more risks" in my view.  So I'd expect them to go aggressive in the stock market after it's passed.  I don't think it's a good idea but maybe it's the hidden plan anyway (to peak the market and then crash it)?

If Trump is playing his cards right this could let him keep control of both the senate and congress with the coming elections in November, but then again a crash would have to be blamed on the Democrats and I'm not sure how that could be played off?  Of course there's also the thought that Trump doesn't know what affect this will have on the stock market and has no idea that it could cause another crash?  Only time will tell...