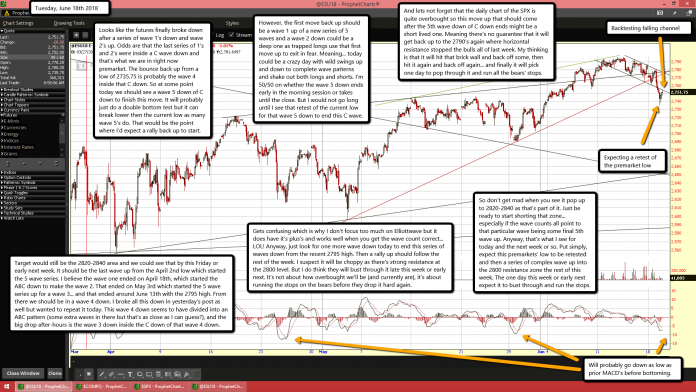 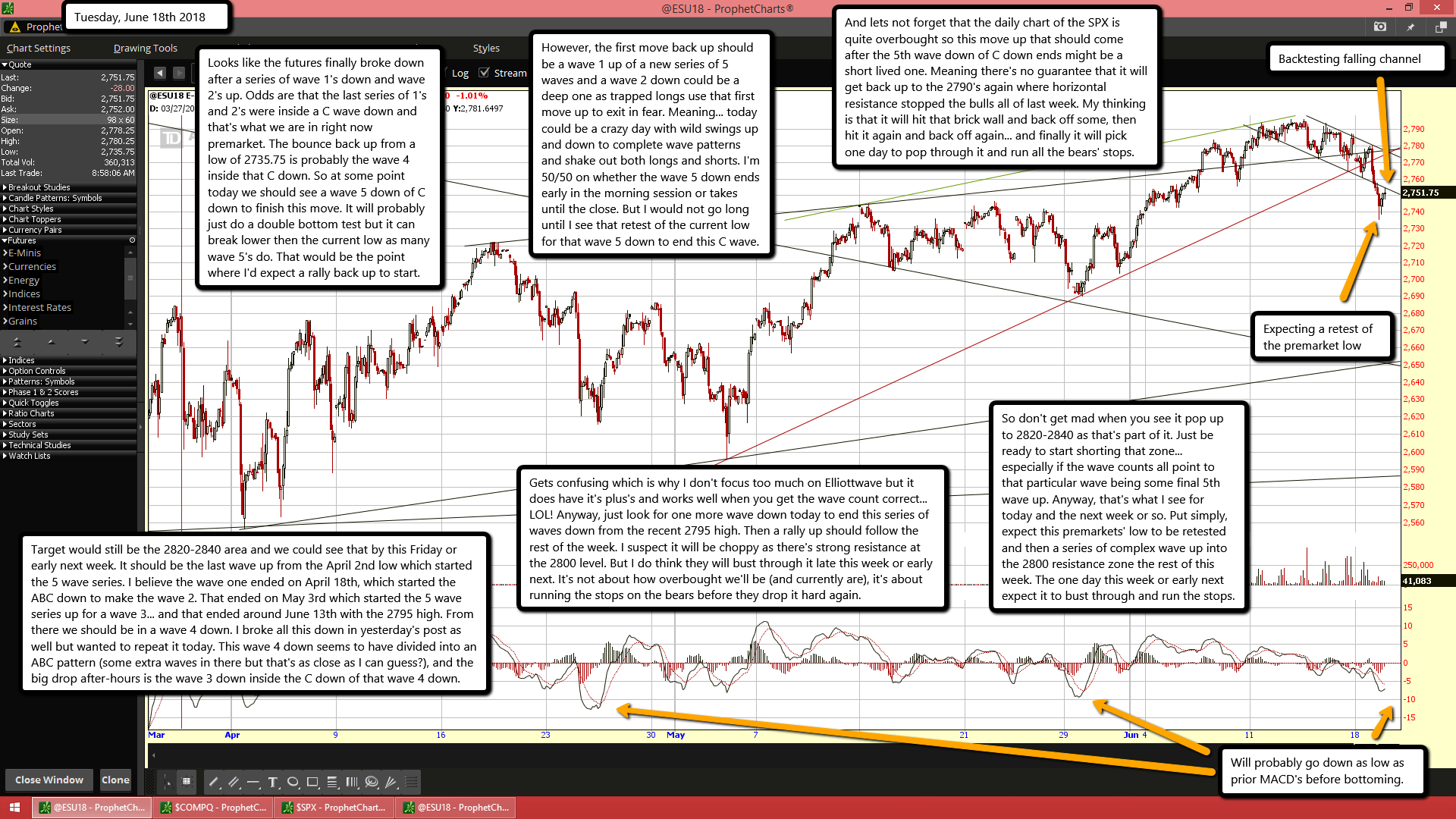 Looks like the futures finally broke down after a series of wave 1's down and wave 2's up. Odds are that the last series of 1's and 2's were inside a C wave down and that's what we are in right now premarket. The bounce back up from a low of 2735.75 is probably the wave 4 inside that C down. So at some point today we should see a wave 5 down of C down to finish this move. It will probably just do a double bottom test but it can break lower then the current low as many wave 5's do. That would be the point where I'd expect a rally back up to start.

However, the first move back up should be a wave 1 up of a new series of 5 waves and a wave 2 down could be a deep one as trapped longs use that first move up to exit in fear. Meaning... today could be a crazy day with wild swings up and down to complete wave patterns and shake out both longs and shorts. I'm 50/50 on whether the wave 5 down ends early in the morning session or takes until the close. But I would not go long until I see that retest of the current low for that wave 5 down to end this C wave.

And lets not forget that the daily chart of the SPX is quite overbought so this move up that should come after the 5th wave down of C down ends might be a short lived one. Meaning there's no guarantee that it will get back up to the 2790's again where horizontal resistance stopped the bulls all of last week. My thinking is that it will hit that brick wall and back off some, then hit it again and back off again... and finally it will pick one day to pop through it and run all the bears' stops.

Target would still be the 2820-2840 area and we could see that by this Friday or early next week. It should be the last wave up from the April 2nd low which started the 5 wave series. I believe the wave one ended on April 18th, which started the ABC down to make the wave 2. That ended on May 3rd which started the 5 wave series up for a wave 3... and that ended around June 13th with the 2795 high. From there we should be in a wave 4 down. I broke all this down in yesterday's post as well but wanted to repeat it today. This wave 4 down seems to have divided into an ABC pattern (some extra waves in there but that's as close as I can guess?), and the big drop after-hours is the wave 3 down inside the C down of that wave 4 down.

Gets confusing which is why I don't focus too much on Elliottwave but it does have it's plus's and works well when you get the wave count correct... LOL! Anyway, just look for one more wave down today to end this series of waves down from the recent 2795 high. Then a rally up should follow the rest of the week. I suspect it will be choppy as there's strong resistance at the 2800 level. But I do think they will bust through it late this week or early next. It's not about how overbought we'll be (and currently are), it's about running the stops on the bears before they drop it hard again.

So don't get mad when you see it pop up to 2820-2840 as that's part of it. Just be ready to start shorting that zone... especially if the wave counts all point to that particular wave being some final 5th wave up. Anyway, that's what I see for today and the next week or so. Put simply, expect this premarkets' low to be retested and then a series of complex wave up into the 2800 resistance zone the rest of this week. The one day this week or early next expect it to bust through and run the stops.