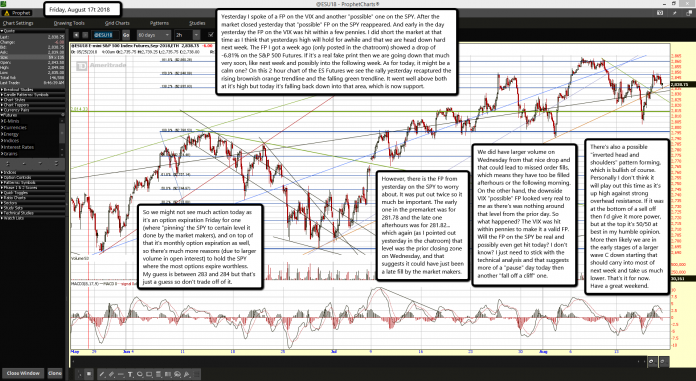 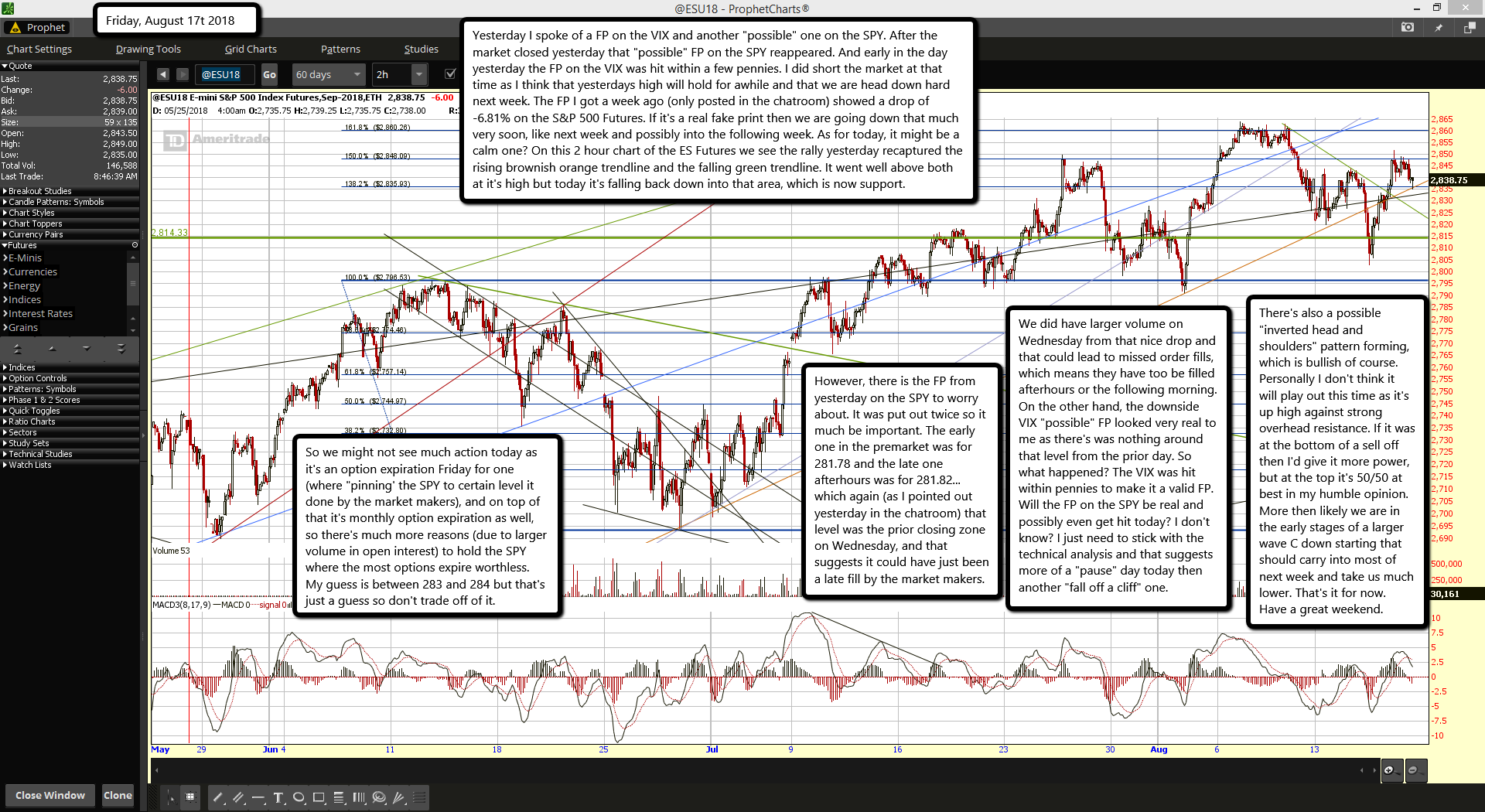 Yesterday I spoke of a FP on the VIX and another "possible" one on the SPY. After the market closed yesterday that "possible" FP on the SPY reappeared. And early in the day yesterday the FP on the VIX was hit within a few pennies. I did short the market at that time as I think that yesterdays high will hold for awhile and that we are head down hard next week. The FP I got a week ago (only posted in the chatroom) showed a drop of -6.81% on the S&P 500 Futures. If it's a real fake print then we are going down that much very soon, like next week and possibly into the following week. As for today, it might be a calm one? On this 2 hour chart of the ES Futures we see the rally yesterday recaptured the rising brownish orange trendline and the falling green trendline. It went well above both at it's high but today it's falling back down into that area, which is now support.

So we might not see much action today as it's an option expiration Friday for one (where "pinning' the SPY to certain level it done by the market makers), and on top of that it's monthly option expiration as well, so there's much more reasons (due to larger volume in open interest) to hold the SPY where the most options expire worthless. My guess is between 283 and 284 but that's just a guess so don't trade off of it.

However, there is the FP from yesterday on the SPY to worry about. It was put out twice so it much be important. The early one in the premarket was for 281.78 and the late one afterhours was for 281.82... which again (as I pointed out yesterday in the chatroom) that level was the prior closing zone on Wednesday, and that suggests it could have just been a late fill by the market makers.

We did have larger volume on Wednesday from that nice drop and that could lead to missed order fills, which means they have too be filled afterhours or the following morning. On the other hand, the downside VIX "possible" FP looked very real to me as there's was nothing around that level from the prior day. So what happened? The VIX was hit within pennies to make it a valid FP. Will the FP on the SPY be real and possibly even get hit today? I don't know? I just need to stick with the technical analysis and that suggests more of a "pause" day today then another "fall off a cliff" one.

There's also a possible "inverted head and shoulders" pattern forming, which is bullish of course. Personally I don't think it will play out this time as it's up high against strong overhead resistance. If it was at the bottom of a sell off then I'd give it more power, but at the top it's 50/50 at best in my humble opinion. More then likely we are in the early stages of a larger wave C down starting that should carry into most of next week and take us much lower. That's it for now. Have a great weekend.