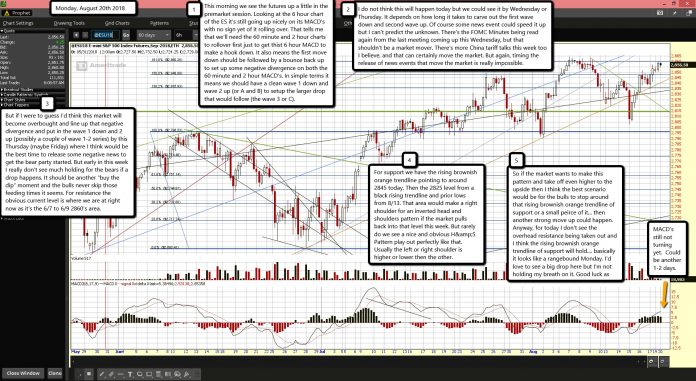 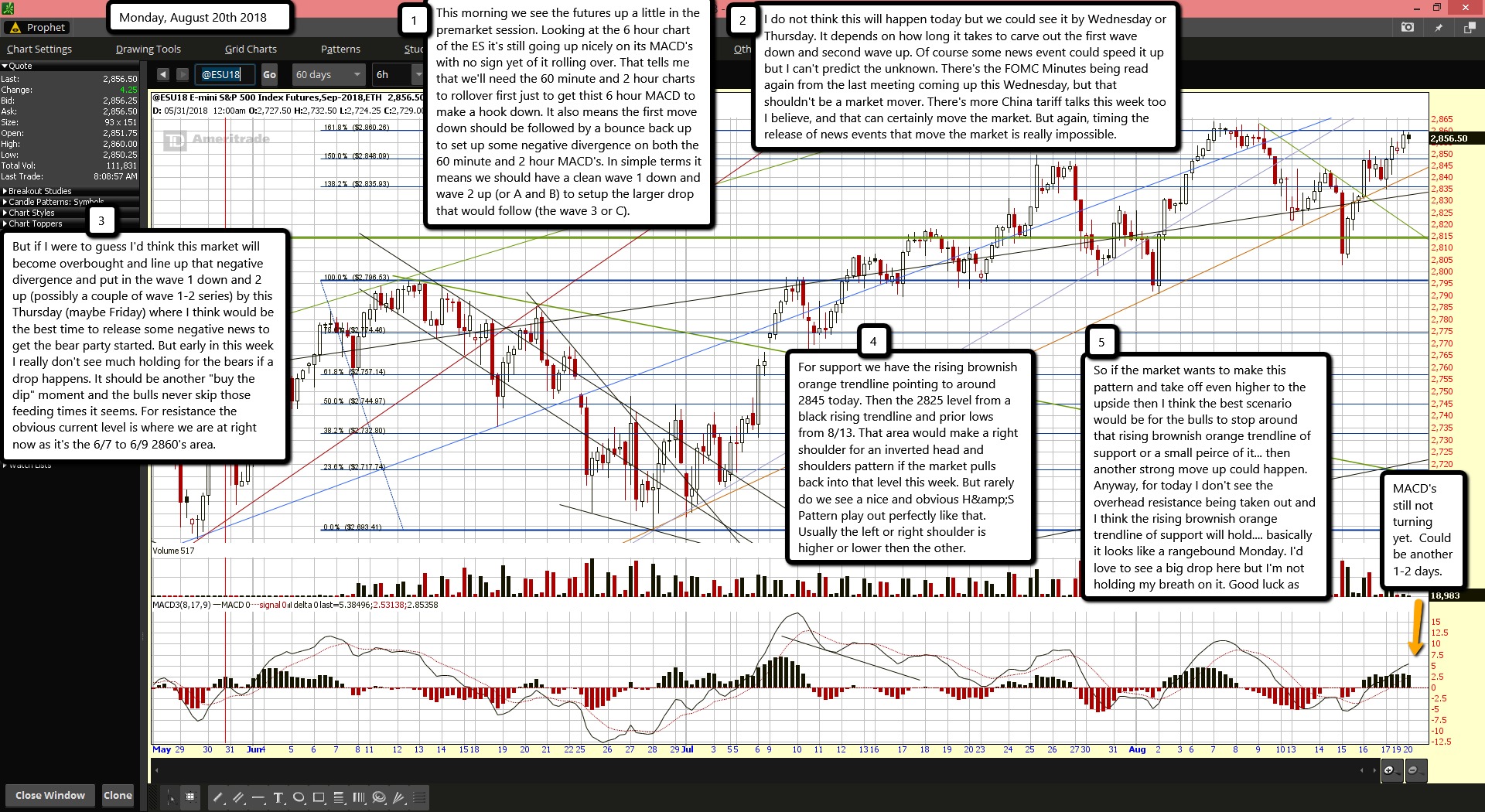 This morning we see the futures up a little in the premarket session. Looking at the 6 hour chart of the ES it's still going up nicely on its MACD's with no sign yet of it rolling over. That tells me that we'll need the 60 minute and 2 hour charts to rollover first just to get thist 6 hour MACD to make a hook down. It also means the first move down should be followed by a bounce back up to set up some negative divergence on both the 60 minute and 2 hour MACD's. In simple terms it means we should have a clean wave 1 down and wave 2 up (or A and B) to setup the larger drop that would follow (the wave 3 or C).

I do not think this will happen today but we could see it by Wednesday or Thursday. It depends on how long it takes to carve out the first wave down and second wave up. Of course some news event could speed it up but I can't predict the unknown. There's the FOMC Minutes being read again from the last meeting coming up this Wednesday, but that shouldn't be a market mover. There's more China tariff talks this week too I believe, and that can certainly move the market. But again, timing the release of news events that move the market is really impossible.

But if I were to guess I'd think this market will become overbought and line up that negative divergence and put in the wave 1 down and 2 up (possibly a couple of wave 1-2 series) by this Thursday (maybe Friday) where I think would be the best time to release some negative news to get the bear party started. But early in this week I really don't see much holding for the bears if a drop happens. It should be another "buy the dip" moment and the bulls never skip those feeding times it seems. For resistance the obvious current level is where we are at right now as it's the 6/7 to 6/9 2860's area.

For support we have the rising brownish orange trendline pointing to around 2845 today. Then the 2825 level from a black rising trendline and prior lows from 8/13. That area would make a right shoulder for an inverted head and shoulders pattern if the market pulls back into that level this week. But rarely do we see a nice and obvious H&S Pattern play out perfectly like that. Usually the left or right shoulder is higher or lower then the other.

So if the market wants to make this pattern and take off even higher to the upside then I think the best scenario would be for the bulls to stop around that rising brownish orange trendline of support or a small peirce of it... then another strong move up could happen. Anyway, for today I don't see the overhead resistance being taken out and I think the rising brownish orange trendline of support will hold.... basically it looks like a rangebound Monday. I'd love to see a big drop here but I'm not holding my breath on it. Good luck as always.