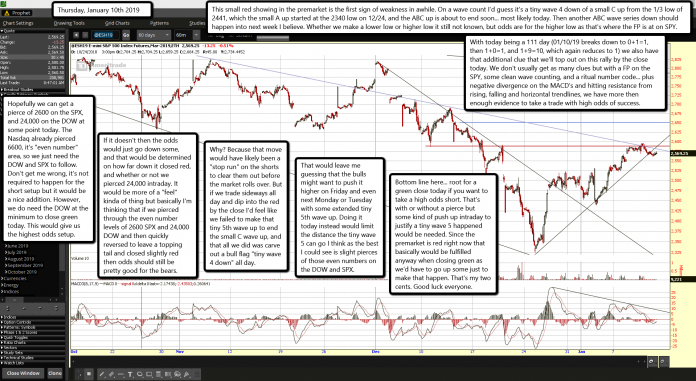 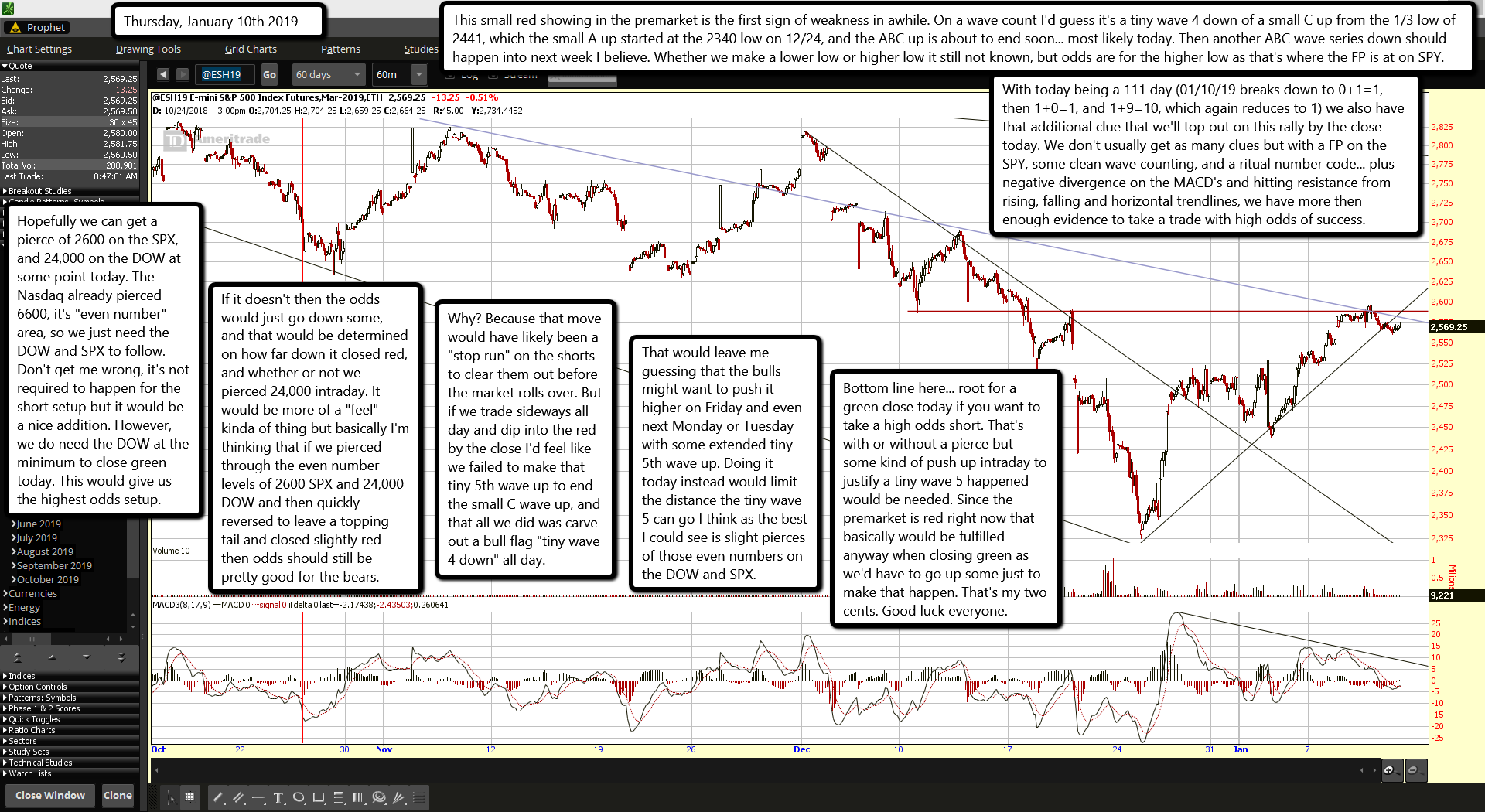 This small red showing in the premarket is the first sign of weakness in awhile. On a wave count I'd guess it's a tiny wave 4 down of a small C up from the 1/3 low of 2441, which the small A up started at the 2340 low on 12/24, and the ABC up is about to end soon... most likely today. Then another ABC wave series down should happen into next week I believe. Whether we make a lower low or higher low it still not known, but odds are for the higher low as that's where the FP is at on SPY.

With today being a 111 day (01/10/19 breaks down to 0+1=1, then 1+0=1, and 1+9=10, which again reduces to 1) we also have that additional clue that we'll top out on this rally by the close today. We don't usually get as many clues but with a FP on the SPY, some clean wave counting, and a ritual number code... plus negative divergence on the MACD's and hitting resistance from rising, falling and horizontal trendlines, we have more then enough evidence to take a trade with high odds of success.

Hopefully we can get a pierce of 2600 on the SPX, and 24,000 on the DOW at some point today. The Nasdaq already pierced 6600, it's "even number" area, so we just need the DOW and SPX to follow. Don't get me wrong, it's not required to happen for the short setup but it would be a nice addition. However, we do need the DOW at the minimum to close green today. This would give us the highest odds setup.

If it doesn't then the odds would just go down some, and that would be determined on how far down it closed red, and whether or not we pierced 24,000 intraday. It would be more of a "feel" kinda of thing but basically I'm thinking that if we pierced through the even number levels of 2600 SPX and 24,000 DOW and then quickly reversed to leave a topping tail and closed slightly red then odds should still be pretty good for the bears.

Why? Because that move would have likely been a "stop run" on the shorts to clear them out before the market rolls over. But if we trade sideways all day and dip into the red by the close I'd feel like we failed to make that tiny 5th wave up to end the small C wave up, and that all we did was carve out a bull flag "tiny wave 4 down" all day.

That would leave me guessing that the bulls might want to push it higher on Friday and even next Monday or Tuesday with some extended tiny 5th wave up. Doing it today instead would limit the distance the tiny wave 5 can go I think as the best I could see is slight pierces of those even numbers on the DOW and SPX.

Bottom line here... root for a green close today if you want to take a high odds short. That's with or without a pierce but some kind of push up intraday to justify a tiny wave 5 happened would be needed. Since the premarket is red right now that basically would be fulfilled anyway when closing green as we'd have to go up some just to make that happen. That's my two cents. Good luck everyone.