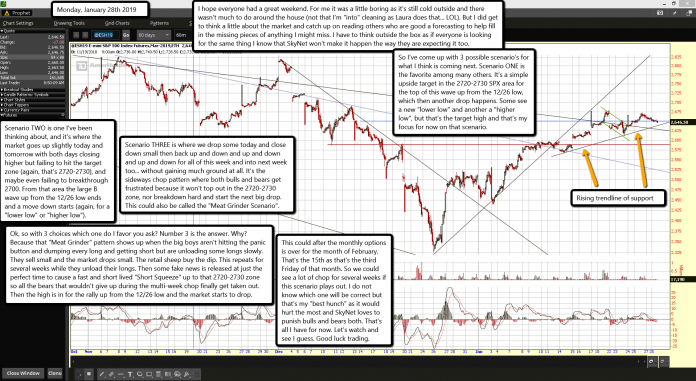 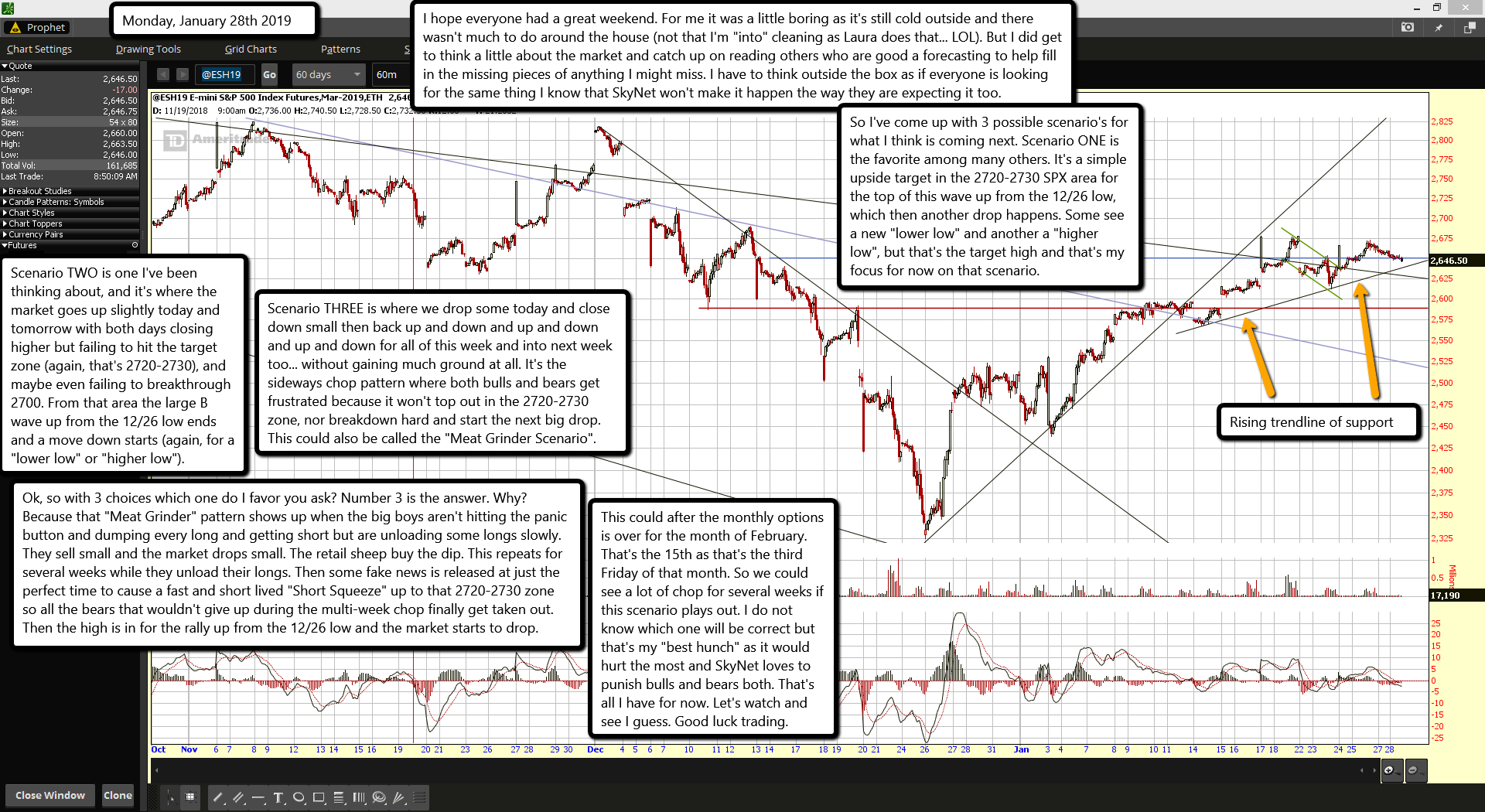 I hope everyone had a great weekend. For me it was a little boring as it's still cold outside and there wasn't much to do around the house (not that I'm "into" cleaning as Laura does that... LOL). But I did get to think a little about the market and catch up on reading others who are good a forecasting to help fill in the missing pieces of anything I might miss. I have to think outside the box as if everyone is looking for the same thing I know that SkyNet won't make it happen the way they are expecting it too.

So I've come up with 3 possible scenario's for what I think is coming next. Scenario ONE is the favorite among many others. It's a simple upside target in the 2720-2730 SPX area for the top of this wave up from the 12/26 low, which then another drop happens. Some see a new "lower low" and another a "higher low", but that's the target high and that's my focus for now on that scenario.

Scenario TWO is one I've been thinking about, and it's where the market goes up slightly today and tomorrow with both days closing higher but failing to hit the target zone (again, that's 2720-2730), and maybe even failing to breakthrough 2700. From that area the large B wave up from the 12/26 low ends and a move down starts (again, for a "lower low" or "higher low").

Scenario THREE is where we drop some today and close down small then back up and down and up and down and up and down for all of this week and into next week too... without gaining much ground at all. It's the sideways chop pattern where both bulls and bears get frustrated because it won't top out in the 2720-2730 zone, nor breakdown hard and start the next big drop. This could also be called the "Meat Grinder Scenario".

Ok, so with 3 choices which one do I favor you ask? Number 3 is the answer. Why? Because that "Meat Grinder" pattern shows up when the big boys aren't hitting the panic button and dumping every long and getting short but are unloading some longs slowly. They sell small and the market drops small. The retail sheep buy the dip. This repeats for several weeks while they unload their longs. Then some fake news is released at just the perfect time to cause a fast and short lived "Short Squeeze" up to that 2720-2730 zone so all the bears that wouldn't give up during the multi-week chop finally get taken out. Then the high is in for the rally up from the 12/26 low and the market starts to drop.

This could after the monthly options is over for the month of February. That's the 15th as that's the third Friday of that month. So we could see a lot of chop for several weeks if this scenario plays out. I do not know which one will be correct but that's my "best hunch" as it would hurt the most and SkyNet loves to punish bulls and bears both. That's all I have for now. Let's watch and see I guess. Good luck trading.