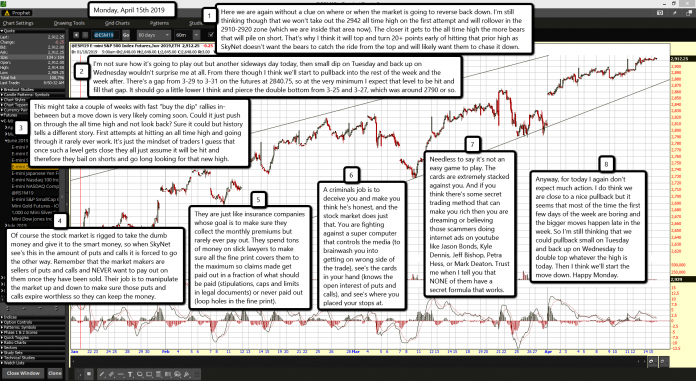 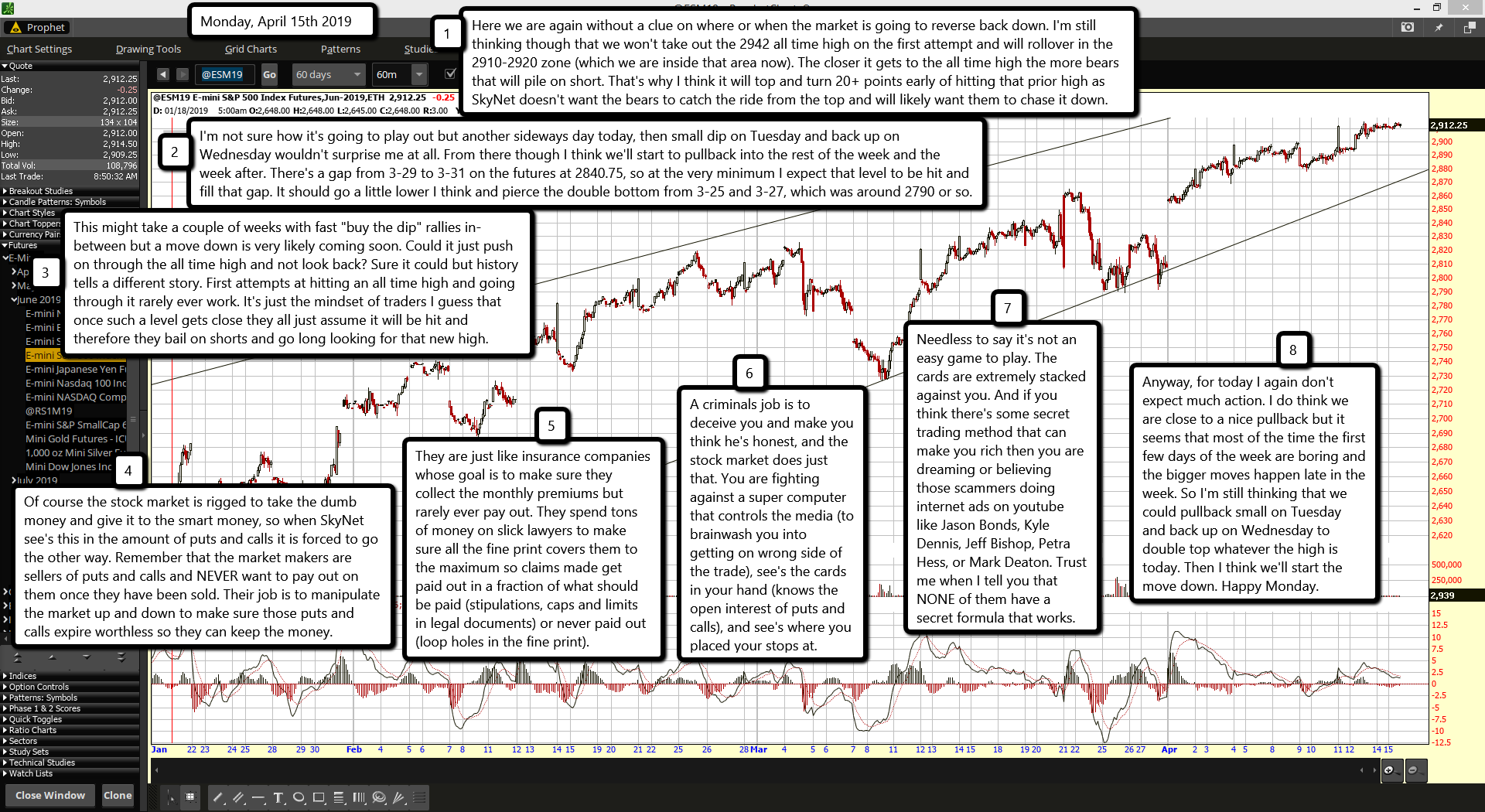 Here we are again without a clue on where or when the market is going to reverse back down. I'm still thinking though that we won't take out the 2942 all time high on the first attempt and will rollover in the 2910-2920 zone (which we are inside that area now). The closer it gets to the all time high the more bears that will pile on short. That's why I think it will top and turn 20+ points early of hitting that prior high as SkyNet doesn't want the bears to catch the ride from the top and will likely want them to chase it down.

I'm not sure how it's going to play out but another sideways day today, then small dip on Tuesday and back up on Wednesday wouldn't surprise me at all. From there though I think we'll start to pullback into the rest of the week and the week after. There's a gap from 3-29 to 3-31 on the futures at 2840.75, so at the very minimum I expect that level to be hit and fill that gap. It should go a little lower I think and pierce the double bottom from 3-25 and 3-27, which was around 2790 or so.

This might take a couple of weeks with fast "buy the dip" rallies in-between but a move down is very likely coming soon. Could it just push on through the all time high and not look back? Sure it could but history tells a different story. First attempts at hitting an all time high and going through it rarely ever work. It's just the mindset of traders I guess that once such a level gets close they all just assume it will be hit and therefore they bail on shorts and go long looking for that new high.

Of course the stock market is rigged to take the dumb money and give it to the smart money, so when SkyNet see's this in the amount of puts and calls it is forced to go the other way. Remember that the market makers are sellers of puts and calls and NEVER want to pay out on them once they have been sold. Their job is to manipulate the market up and down to make sure those puts and calls expire worthless so they can keep the money.

They are just like insurance companies whose goal is to make sure they collect the monthly premiums but rarely ever pay out. They spend tons of money on slick lawyers to make sure all the fine print covers them to the maximum so claims made get paid out in a fraction of what should be paid (stipulations, caps and limits in legal documents) or never paid out (loop holes in the fine print).

A criminals job is to deceive you and make you think he's honest, and the stock market does just that. You are fighting against a super computer that controls the media (to brainwash you into getting on wrong side of the trade), see's the cards in your hand (knows the open interest of puts and calls), and see's where you placed your stops at.

Needless to say it's not an easy game to play. The cards are extremely stacked against you. And if you think there's some secret trading method that can make you rich then you are dreaming or believing those scammers doing internet ads on youtube like Jason Bonds, Kyle Dennis, Jeff Bishop, Petra Hess, or Mark Deaton. Trust me when I tell you that NONE of them have a secret formula that works.

Anyway, for today I again don't expect much action. I do think we are close to a nice pullback but it seems that most of the time the first few days of the week are boring and the bigger moves happen late in the week. So I'm still thinking that we could pullback small on Tuesday and back up on Wednesday to double top whatever the high is today. Then I think we'll start the move down. Happy Monday.