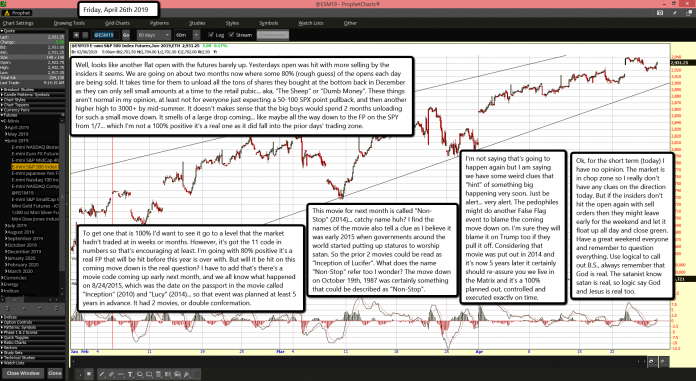 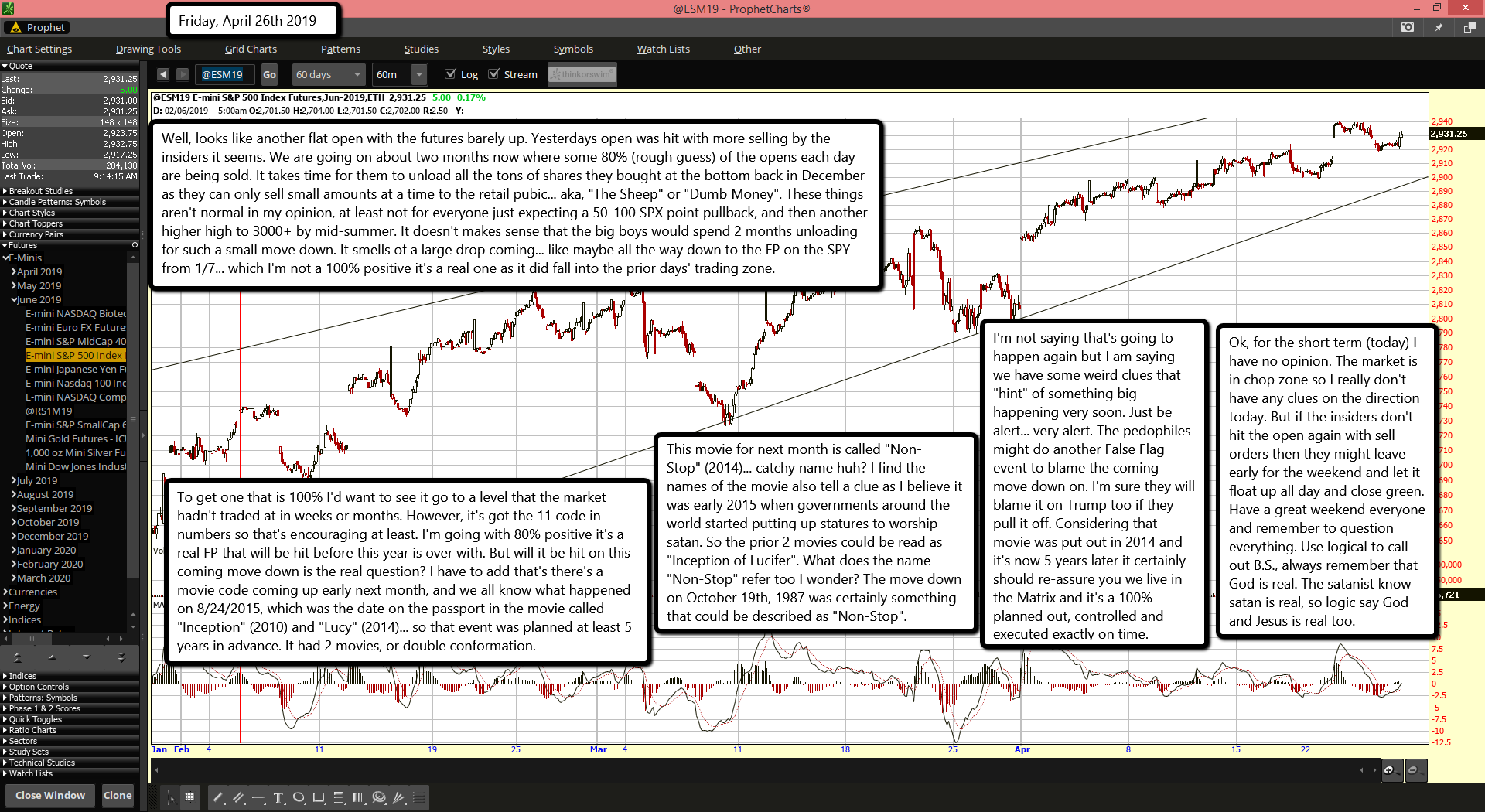 Well, looks like another flat open with the futures barely up. Yesterdays open was hit with more selling by the insiders it seems. We are going on about two months now where some 80% (rough guess) of the opens each day are being sold. It takes time for them to unload all the tons of shares they bought at the bottom back in December as they can only sell small amounts at a time to the retail pubic... aka, "The Sheep" or "Dumb Money". These things aren't normal in my opinion, at least not for everyone just expecting a 50-100 SPX point pullback, and then another higher high to 3000+ by mid-summer. It doesn't makes sense that the big boys would spend 2 months unloading for such a small move down. It smells of a large drop coming... like maybe all the way down to the FP on the SPY from 1/7... which I'm not a 100% positive it's a real one as it did fall into the prior days' trading zone.

To get one that is 100% I'd want to see it go to a level that the market hadn't traded at in weeks or months. However, it's got the 11 code in numbers so that's encouraging at least. I'm going with 80% positive it's a real FP that will be hit before this year is over with. But will it be hit on this coming move down is the real question? I have to add that's there's a movie code coming up early next month, and we all know what happened on 8/24/2015, which was the date on the passport in the movie called "Inception" (2010) and "Lucy" (2014)... so that event was planned at least 5 years in advance. It had 2 movies, or double conformation.

This movie for next month is called "Non-Stop" (2014)... catchy name huh? I find the names of the movie also tell a clue as I believe it was sometime in 2015 when governments around the world started putting up statures to worship satan (Baal).  So the prior 2 movies could be read as "Inception of Lucifer". What does the name "Non-Stop" refer too I wonder? The move down on October 19th, 1987 was certainly something that could be described as "Non-Stop".

I'm not saying that's going to happen again but I am saying we have some weird clues that "hint" of something big happening very soon. Just be alert... very alert. The pedophiles might do another False Flag event to blame the coming move down on. I'm sure they will blame it on Trump too if they pull it off. Considering that movie was put out in 2014 and it's now 5 years later it certainly should re-assure you we live in the Matrix and it's a 100% planned out, controlled and executed exactly on time.

Ok, for the short term (today) I have no opinion. The market is in chop zone so I really don't have any clues on the direction today. But if the insiders don't hit the open again with sell orders then they might leave early for the weekend and let it float up all day and close green. Have a great weekend everyone and remember to question everything. Use logical to call out B.S., always remember that God is real. The satanist know satan is real, so logic say God and Jesus is real too.