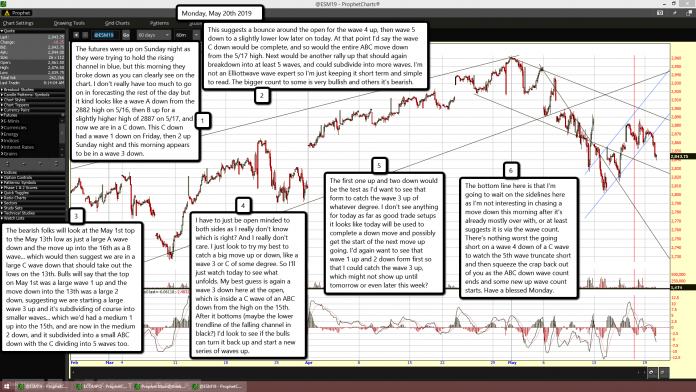 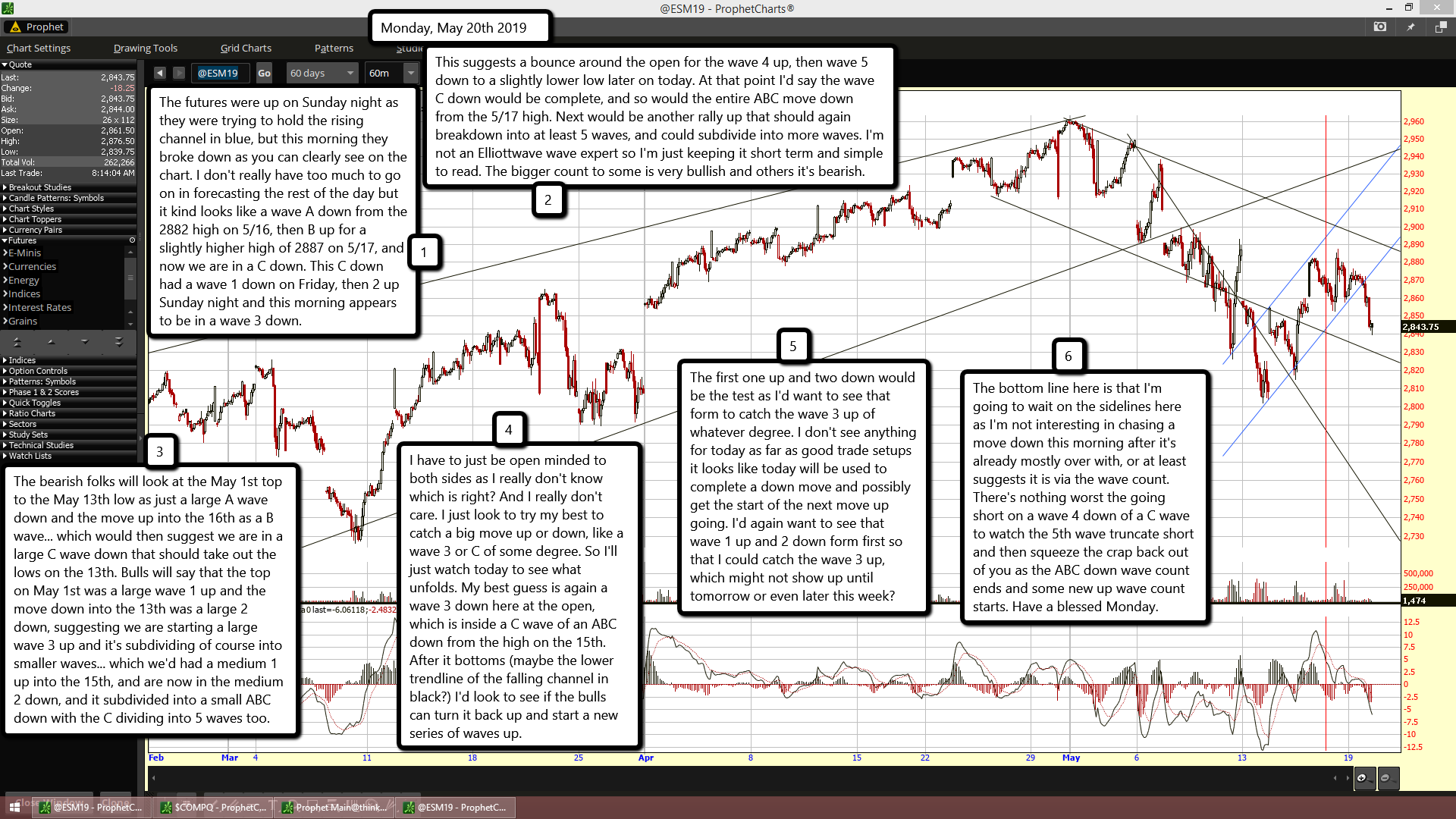 The futures were up on Sunday night as they were trying to hold the rising channel in blue, but this morning they broke down as you can clearly see on the chart. I don't really have too much to go on in forecasting the rest of the day but it kind looks like a wave A down from the 2882 high on 5/16, then B up for a slightly higher high of 2887 on 5/17, and now we are in a C down. This C down had a wave 1 down on Friday, then 2 up Sunday night and this morning appears to be in a wave 3 down.

This suggests a bounce around the open for the wave 4 up, then wave 5 down to a slightly lower low later on today. At that point I'd say the wave C down would be complete, and so would the entire ABC move down from the 5/17 high. Next would be another rally up that should again breakdown into at least 5 waves, and could subdivide into more waves. I'm not an Elliottwave wave expert so I'm just keeping it short term and simple to read. The bigger count to some is very bullish and others it's bearish.

The bearish folks will look at the May 1st top to the May 13th low as just a large A wave down and the move up into the 16th as a B wave... which would then suggest we are in a large C wave down that should take out the lows on the 13th. Bulls will say that the top on May 1st was a large wave 1 up and the move down into the 13th was a large 2 down, suggesting we are starting a large wave 3 up and it's subdividing of course into smaller waves... which we'd had a medium 1 up into the 15th, and are now in the medium 2 down, and it subdivided into a small ABC down with the C dividing into 5 waves too.

I have to just be open minded to both sides as I really don't know which is right? And I really don't care. I just look to try my best to catch a big move up or down, like a wave 3 or C of some degree. So I'll just watch today to see what unfolds. My best guess is again a wave 3 down here at the open, which is inside a C wave of an ABC down from the high on the 15th. After it bottoms (maybe the lower trendline of the falling channel in black?) I'd look to see if the bulls can turn it back up and start a new series of waves up.

The first one up and two down would be the test as I'd want to see that form to catch the wave 3 up of whatever degree. I don't see anything for today as far as good trade setups it looks like today will be used to complete a down move and possibly get the start of the next move up going. I'd again want to see that wave 1 up and 2 down form first so that I could catch the wave 3 up, which might not show up until tomorrow or even later this week?

The bottom line here is that I'm going to wait on the sidelines here as I'm not interesting in chasing a move down this morning after it's already mostly over with, or at least suggests it is via the wave count. There's nothing worst the going short on a wave 4 down of a C wave to watch the 5th wave truncate short and then squeeze the crap back out of you as the ABC down wave count ends and some new up wave count starts. Have a blessed Monday.