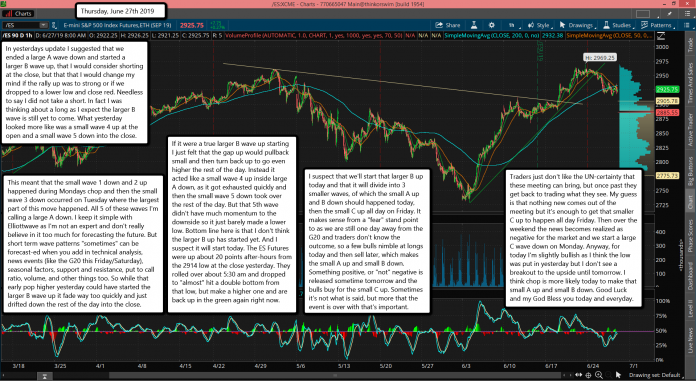 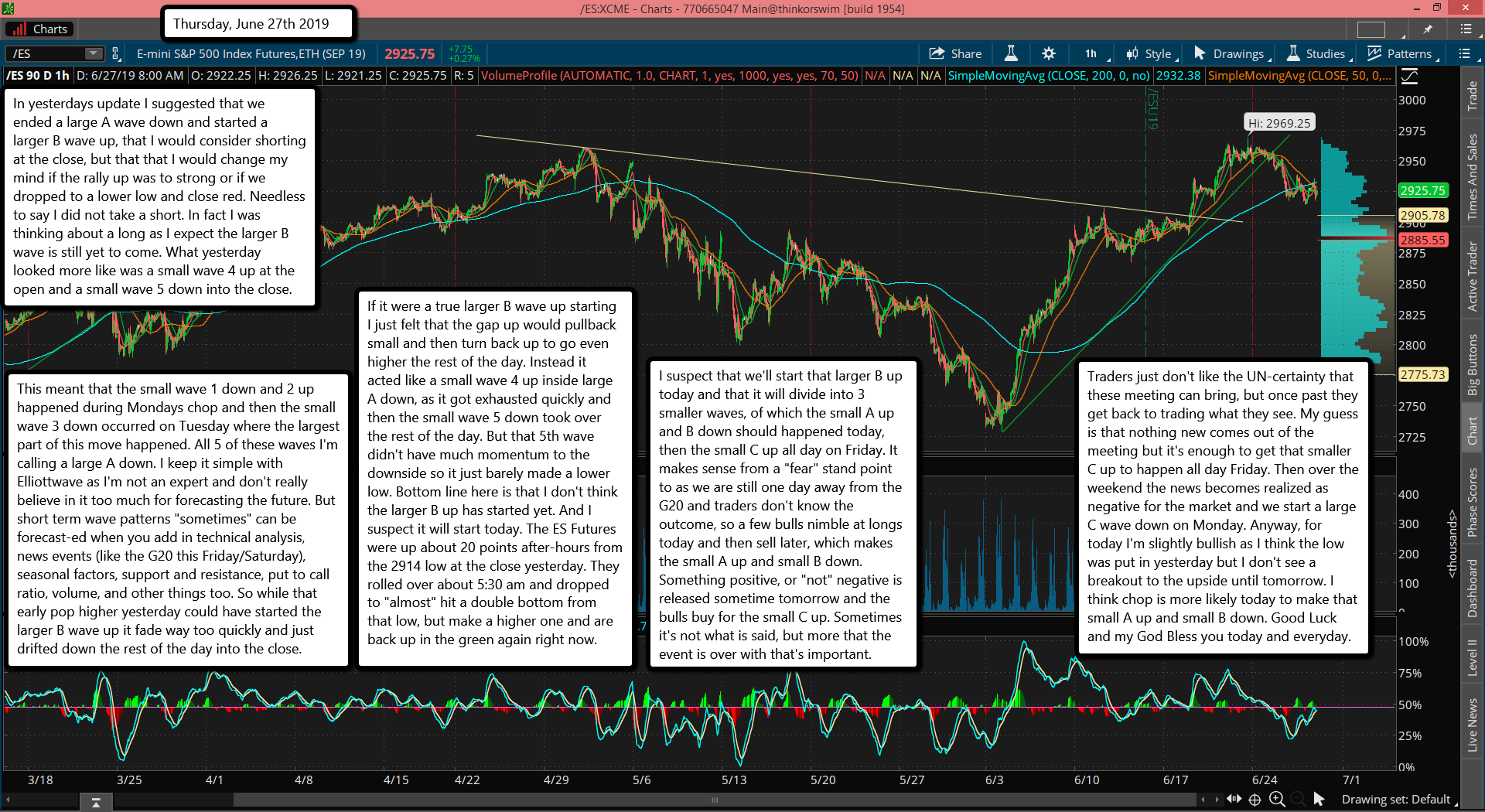 In yesterdays update I suggested that we ended a large A wave down and started a larger B wave up, that I would consider shorting at the close, but that that I would change my mind if the rally up was to strong or if we dropped to a lower low and close red. Needless to say I did not take a short. In fact I was thinking about a long as I expect the larger B wave is still yet to come. What yesterday looked more like was a small wave 4 up at the open and a small wave 5 down into the close.

This meant that the small wave 1 down and 2 up happened during Mondays chop and then the small wave 3 down occurred on Tuesday where the largest part of this move happened. All 5 of these waves I'm calling a large A down. I keep it simple with Elliottwave as I'm not an expert and don't really believe in it too much for forecasting the future. But short term wave patterns "sometimes" can be forecast-ed when you add in technical analysis, news events (like the G20 this Friday/Saturday), seasonal factors, support and resistance, put to call ratio, volume, and other things too. So while that early pop higher yesterday could have started the larger B wave up it fade way too quickly and just drifted down the rest of the day into the close.

If it were a true larger B wave up starting I just felt that the gap up would pullback small and then turn back up to go even higher the rest of the day. Instead it acted like a small wave 4 up inside large A down, as it got exhausted quickly and then the small wave 5 down took over the rest of the day. But that 5th wave didn't have much momentum to the downside so it just barely made a lower low. Bottom line here is that I don't think the larger B up has started yet. And I suspect it will start today. The ES Futures were up about 20 points after-hours from the 2914 low at the close yesterday. They rolled over about 5:30 am and dropped to "almost" hit a double bottom from that low, but make a higher one and are back up in the green again right now.

I suspect that we'll start that larger B up today and that it will divide into 3 smaller waves, of which the small A up and B down should happened today, then the small C up all day on Friday. It makes sense from a "fear" stand point to as we are still one day away from the G20 and traders don't know the outcome, so a few bulls nimble at longs today and then sell later, which makes the small A up and small B down. Something positive, or "not" negative is released sometime tomorrow and the bulls buy for the small C up. Sometimes it's not what is said, but more that the event is over with that's important.

Traders just don't like the UN-certainty that these meeting can bring, but once past they get back to trading what they see. My guess is that nothing new comes out of the meeting but it's enough to get that smaller C up to happen all day Friday. Then over the weekend the news becomes realized as negative for the market and we start a large C wave down on Monday. Anyway, for today I'm slightly bullish as I think the low was put in yesterday but I don't see a breakout to the upside until tomorrow. I think chop is more likely today to make that small A up and small B down. Good Luck and my God Bless you today and everyday.