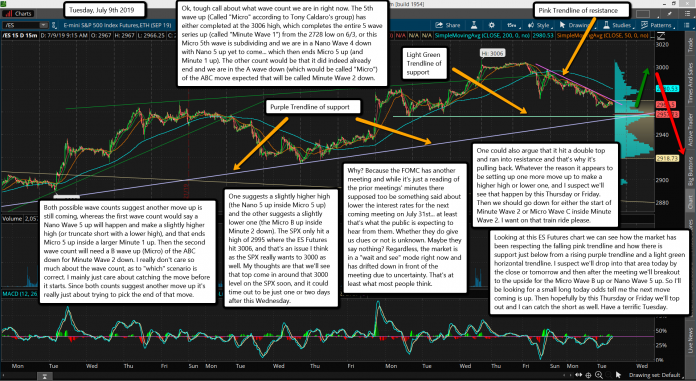 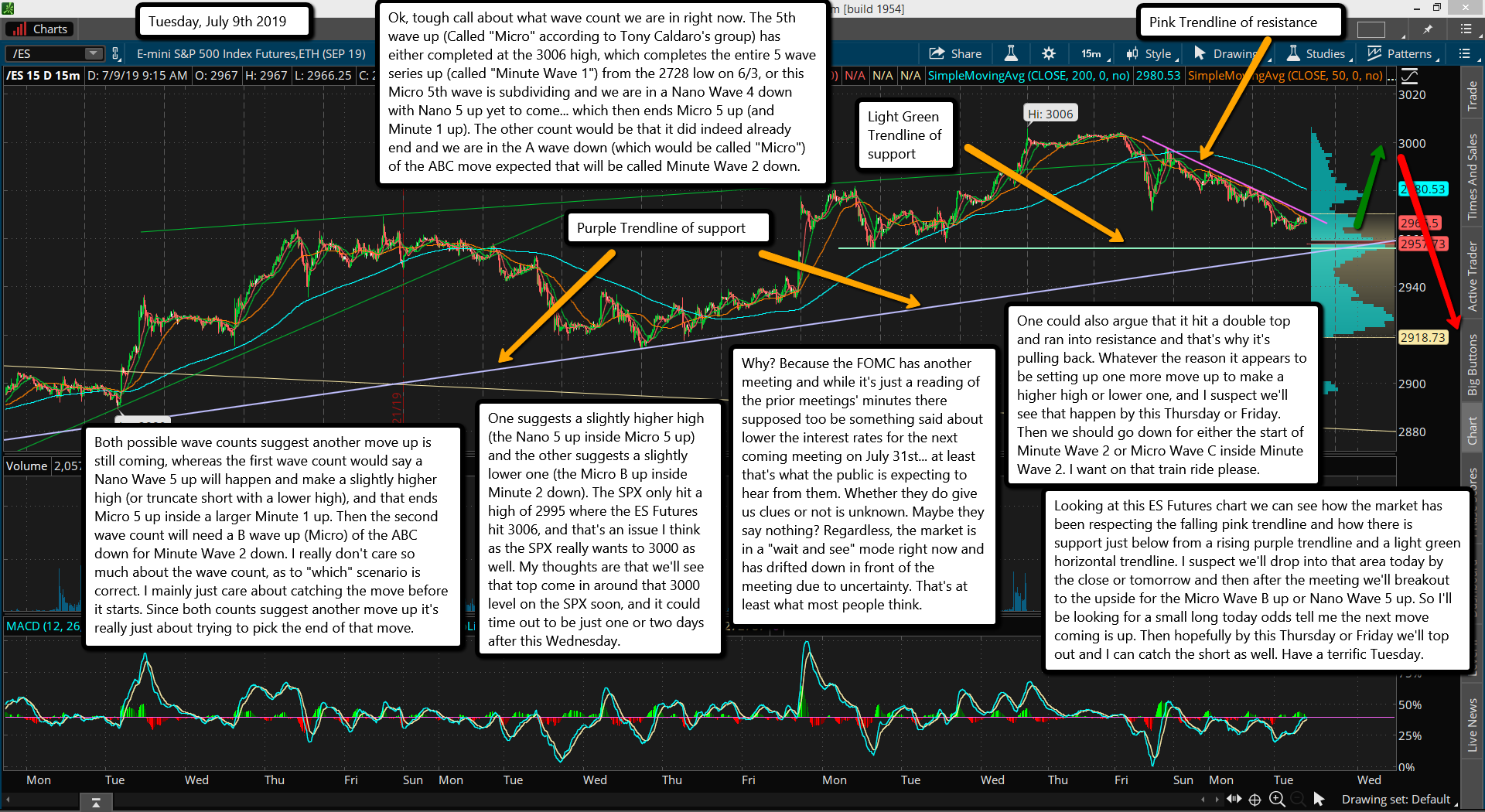 Ok, tough call about what wave count we are in right now. The 5th wave up (Called "Micro" according to Tony Caldaro's group) has either completed at the 3006 high, which completes the entire 5 wave series up (called "Minute Wave 1") from the 2728 low on 6/3, or this Micro 5th wave is subdividing and we are in a Nano Wave 4 down with Nano 5 up yet to come... which then ends Micro 5 up (and Minute 1 up). The other count would be that it did indeed already end and we are in the A wave down (which would be called "Micro") of the ABC move expected that will be called Minute Wave 2 down.

Both possible wave counts suggest another move up is still coming, whereas the first wave count would say a Nano Wave 5 up will happen and make a slightly higher high (or truncate short with a lower high), and that ends Micro 5 up inside a larger Minute 1 up. Then the second wave count will need a B wave up (Micro) of the ABC down for Minute Wave 2 down. I really don't care so much about the wave count, as to "which" scenario is correct. I mainly just care about catching the move before it starts. Since both counts suggest another move up it's really just about trying to pick the end of that move.

One suggests a slightly higher high (the Nano 5 up inside Micro 5 up) and the other suggests a slightly lower one (the Micro B up inside Minute 2 down). The SPX only hit a high of 2995 where the ES Futures hit 3006, and that's an issue I think as the SPX really wants to 3000 as well. My thoughts are that we'll see that top come in around that 3000 level on the SPX soon, and it could time out to be just one or two days after this Wednesday.

Why? Because the FOMC has another meeting and while it's just a reading of the prior meetings' minutes there supposed too be something said about lower the interest rates for the next coming meeting on July 31st... at least that's what the public is expecting to hear from them. Whether they do give us clues or not is unknown. Maybe they say nothing? Regardless, the market is in a "wait and see" mode right now and has drifted down in front of the meeting due to uncertainty. That's at least what most people think.

One could also argue that it hit a double top and ran into resistance and that's why it's pulling back. Whatever the reason it appears to be setting up one more move up to make a higher high or lower one, and I suspect we'll see that happen by this Thursday or Friday. Then we should go down for either the start of Minute Wave 2 or Micro Wave C inside Minute Wave 2. I want on that train ride please.

Looking at this ES Futures chart we can see how the market has been respecting the falling pink trendline and how there is support just below from a rising purple trendline and a light green horizontal trendline. I suspect we'll drop into that area today by the close or tomorrow and then after the meeting we'll breakout to the upside for the Micro Wave B up or Nano Wave 5 up. So I'll be looking for a small long today odds tell me the next move coming is up. Then hopefully by this Thursday or Friday we'll top out and I can catch the short as well. Have a terrific Tuesday.