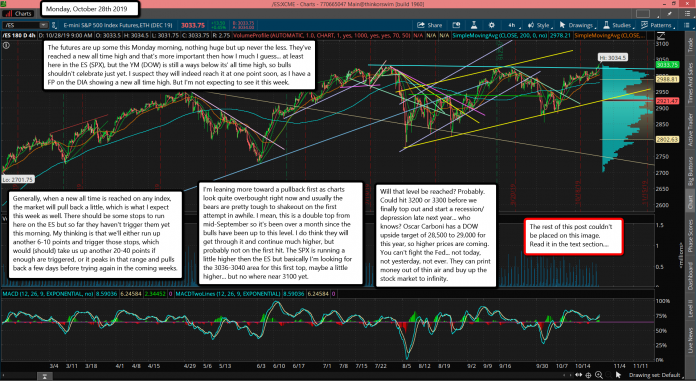 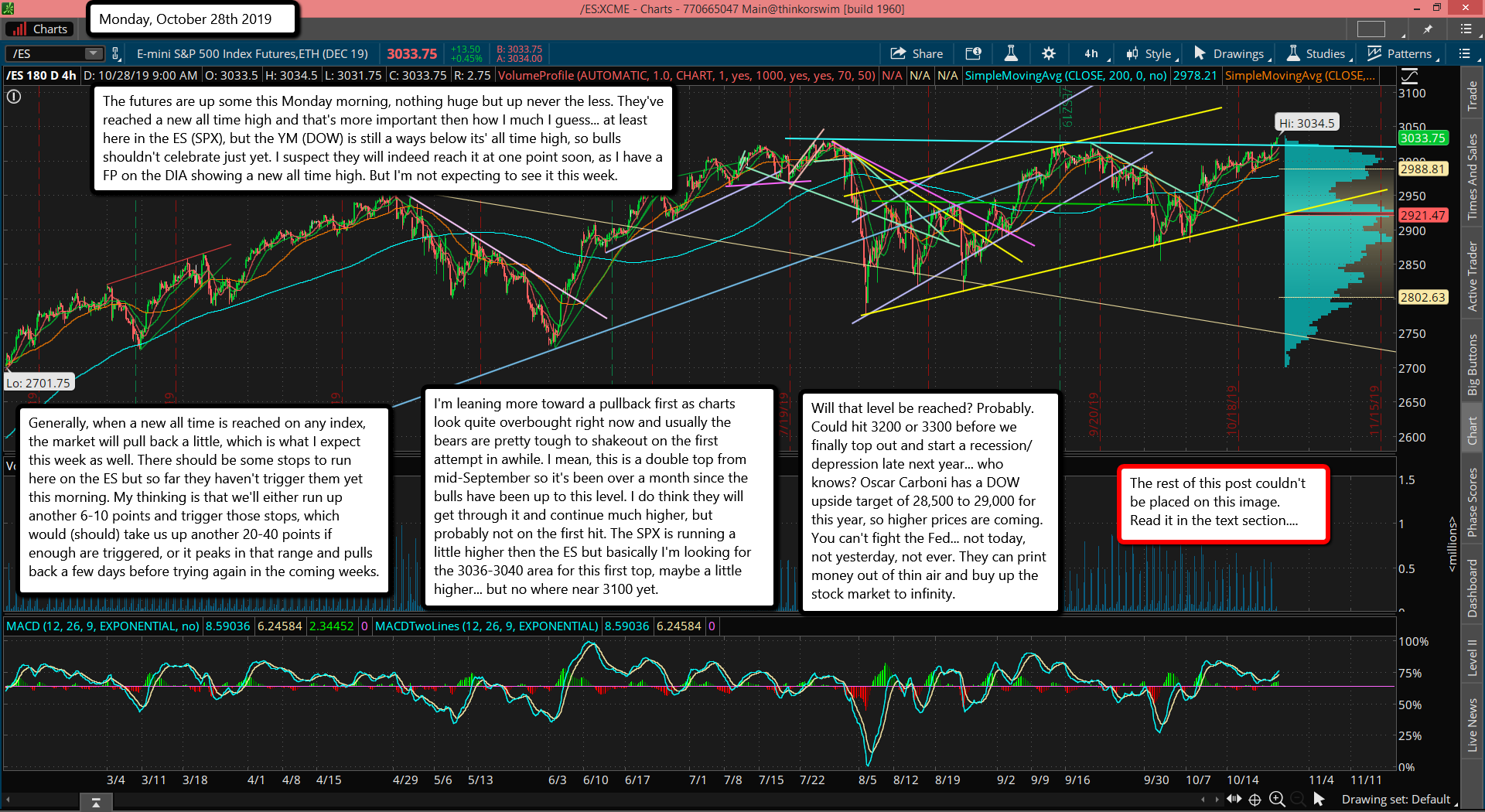 The futures are up some this Monday morning, nothing huge but up never the less. They've reached a new all time high and that's more important then how I much I guess... at least here in the ES (SPX), but the YM (DOW) is still a ways below its' all time high, so bulls shouldn't celebrate just yet. I suspect they will indeed reach it at one point soon, as I have a FP on the DIA showing a new all time high. But I'm not expecting to see it this week.

Generally, when a new all time is reached on any index, the market will pull back a little, which is what I expect this week as well. There should be some stops to run here on the ES but so far they haven't trigger them yet this morning. My thinking is that we'll either run up another 6-10 points and trigger those stops, which would (should) take us up another 20-40 points if enough are triggered, or it peaks in that range and pulls back a few days before trying again in the coming weeks.

I'm leaning more toward a pullback first as charts look quite overbought right now and usually the bears are pretty tough to shakeout on the first attempt in awhile. I mean, this is a double top from mid-September so it's been over a month since the bulls have been up to this level. I do think they will get through it and continue much higher, but probably not on the first hit. The SPX is running a little higher then the ES but basically I'm looking for the 3036-3040 area for this first top, maybe a little higher... but no where near 3100 yet.

Will that level be reached? Probably. Could hit 3200 or 3300 before we finally top out and start a recession/depression late next year... who knows? Oscar Carboni has a DOW upside target of 28,500 to 29,000 for this year, so higher prices are coming. You can't fight the Fed... not today, not yesterday, not ever. They can print money out of thin air and buy up the stock market to infinity.

But there are some reason to suggest that mathematically it can't continue too much longer as interest rates can't go much lower, as well as the danger of inverted yield curves that can't seem to be stopped. Michel Pento explains it very well in this video.

We'll cross that road when we get there I guess. For the short term I'm thinking we will see a top of some kind by midweek as there's an FOMC meeting this Wednesday and I wouldn't be surprised to see a pullback afterwards. I don't see it marking "the Top" for the market but pulling back to the 3000 area again (maybe a slight pierce to lure in shorts) wouldn't be out of the question.

Apple has earnings after the bell that day as well and when I look at the chart of it I have to notice how far it is away from its' 200 day moving average... not a good sign. Plus there's a gap on it at 230.44 from 10/10/19, so I would not be surprised if Apple sells off after their earnings along with the overall market. I don't normally track stocks by themselves but the timing of their earnings and the FOMC had me point it out for you. So if we do get a pullback late this week I don't think it's "the End" for the bulls, just a pullback that's all.

There are higher upside targets still out there so I'll be looking for more upside into November as well. Then probably another pullback, and the usually December "end of the year" rally. One last thing, it's also common to see the high put in on a Monday the week of any FOMC, where there's a small pullback on Tuesday (uncertainty) before the Wednesday FOMC, where it usually (I'd guess 80% of the time) closes green that day.

Therefore we might see the high today, then a small A wave down tomorrow, and back up for the B wave into the close on Wednesday. Then a C wave down (3000 SPX area... or a pierce?) on Thursday, which they can blame on Apple ("they" means the talking puppets on the financial news stations). That's my best guess for this week. Have a bless day.