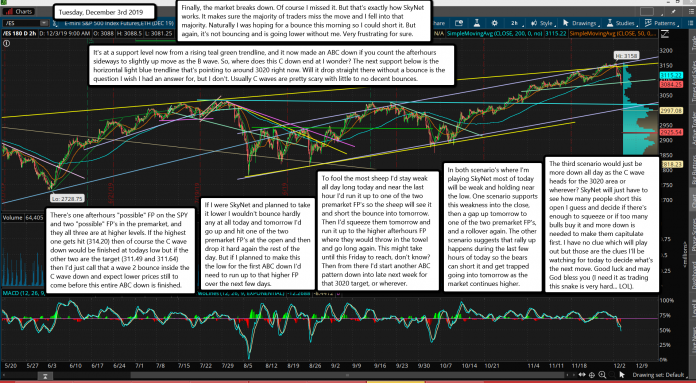 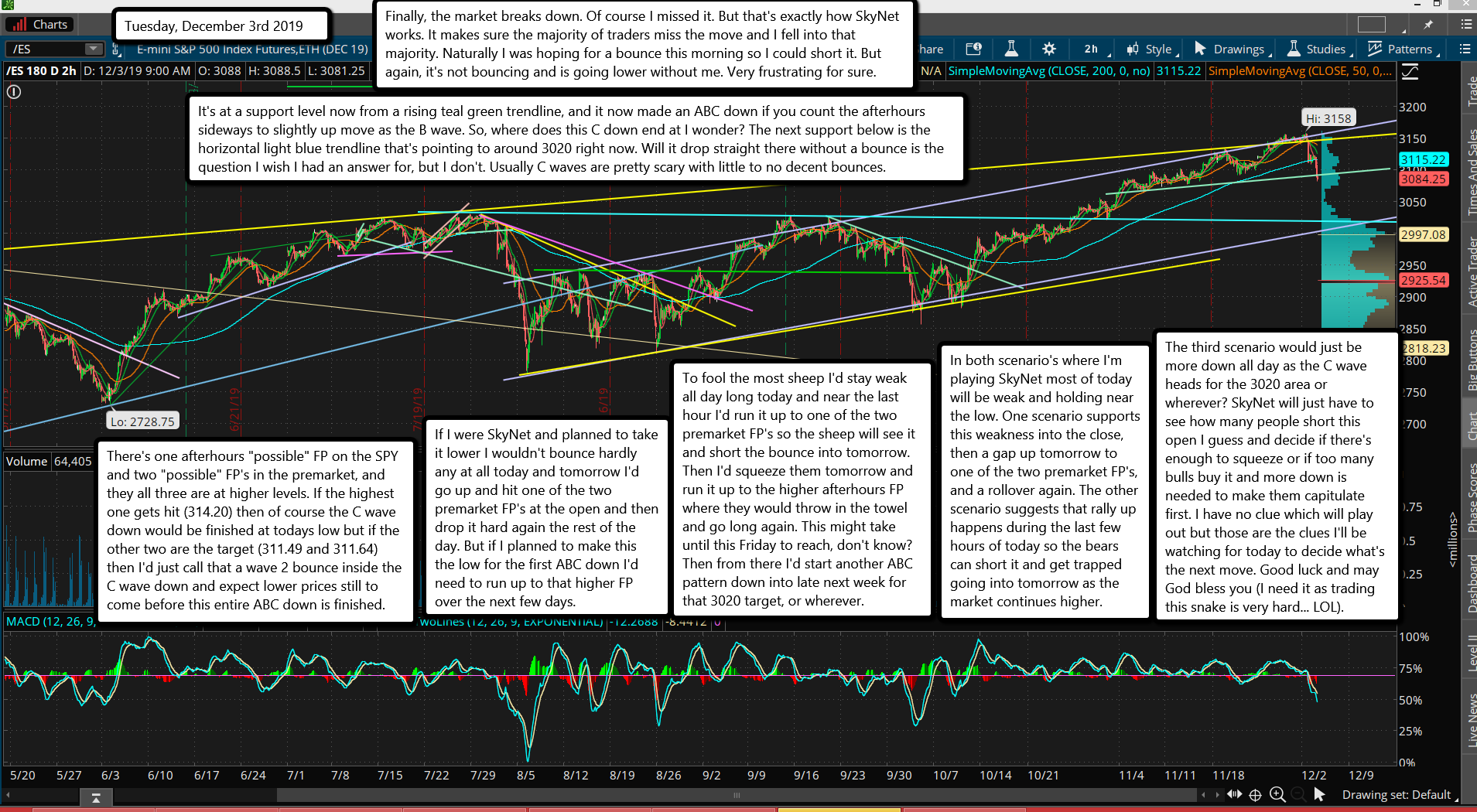 Finally, the market breaks down. Of course I missed it. But that's exactly how SkyNet works. It makes sure the majority of traders miss the move and I fell into that majority. Naturally I was hoping for a bounce this morning so I could short it. But again, it's not bouncing and is going lower without me. Very frustrating for sure.

It's at a support level now from a rising teal green trendline, and it now made an ABC down if you count the afterhours sideways to slightly up move as the B wave. So, where does this C down end at I wonder? The next support below is the horizontal light blue trendline that's pointing to around 3020 right now. Will it drop straight there without a bounce is the question I wish I had an answer for, but I don't. Usually C waves are pretty scary with little to no decent bounces.

There's one afterhours "possible" FP on the SPY and two "possible" FP's in the premarket, and they all three are at higher levels. If the highest one gets hit (314.20) then of course the C wave down would be finished at todays low but if the other two are the target (311.49 and 311.64) then I'd just call that a wave 2 bounce inside the C wave down and expect lower prices still to come before this entire ABC down is finished.

If I were SkyNet and planned to take it lower I wouldn't bounce hardly any at all today and tomorrow I'd go up and hit one of the two premarket FP's at the open and then drop it hard again the rest of the day. But if I planned to make this the low for the first ABC down I'd need to run up to that higher FP over the next few days.

To fool the most sheep I'd stay weak all day long today and near the last hour I'd run it up to one of the two premarket FP's so the sheep will see it and short the bounce into tomorrow. Then I'd squeeze them tomorrow and run it up to the higher afterhours FP where they would throw in the towel and go long again. This might take until this Friday to reach, don't know? Then from there I'd start another ABC pattern down into late next week for that 3020 target, or wherever.

In both scenario's where I'm playing SkyNet most of today will be weak and holding near the low. One scenario supports this weakness into the close, then a gap up tomorrow to one of the two premarket FP's, and a rollover again. The other scenario suggests that rally up happens during the last few hours of today so the bears can short it and get trapped going into tomorrow as the market continues higher.

The third scenario would just be more down all day as the C wave heads for the 3020 area or wherever? SkyNet will just have to see how many people short this open I guess and decide if there's enough to squeeze or if too many bulls buy it and more down is needed to make them capitulate first. I have no clue which will play out but those are the clues I'll be watching for today to decide what's the next move. Good luck and may God bless you (I need it as trading this snake is very hard... LOL).