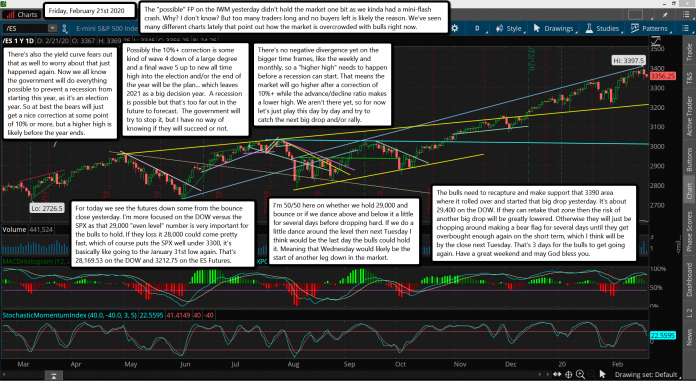 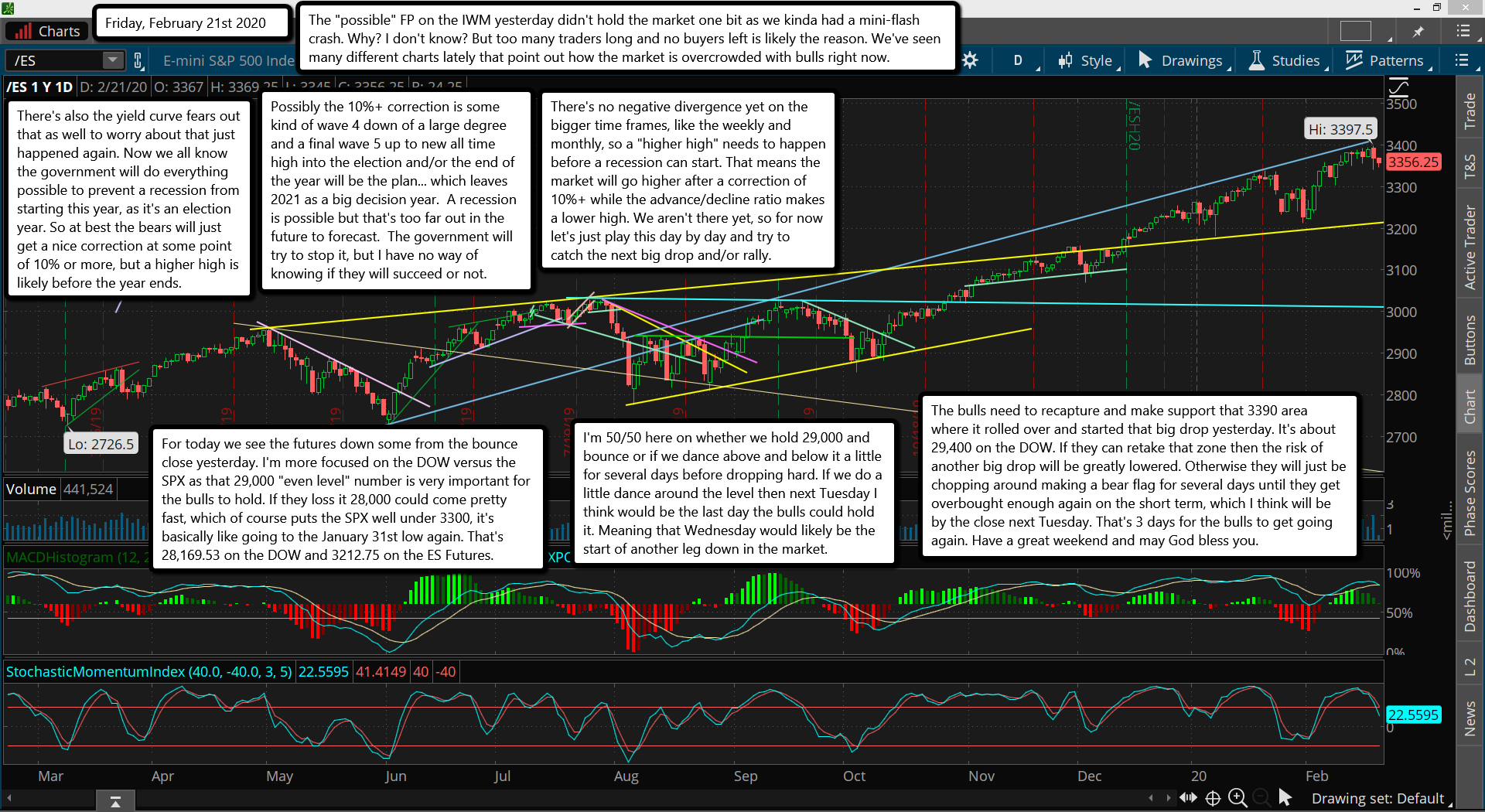 The "possible" FP on the IWM yesterday didn't hold the market one bit as we kinda had a mini-flash crash. Why? I don't know? But too many traders long and no buyers left is likely the reason. We've seen many different charts lately that point out how the market is overcrowded with bulls right now. I posted this chart previously but I'll re-post it here again in case you missed it.

Over the past 6 weeks, they’ve bought (to open) 70 million more contracts than they’ve sold (to close).

We’ve never seen this level of speculation before. Not even close. pic.twitter.com/VtRCRXRTbS

There's also the yield curve fears out that as well to worry about that just happened again. Now we all know the government will do everything possible to prevent a recession from starting this year, as it's an election year. So at best the bears will just get a nice correction at some point of 10% or more, but a higher high is likely before the year ends.

Possibly the 10%+ correction is some kind of wave 4 down of a large degree and a final wave 5 up to new all time high into the election and/or the end of the year will be the plan... which leaves 2021 as a big decision year.  A recession is possible but that's too far out in the future to forecast. This chart here is something to pay attention too but again, I don't think it will start this year.  The government will try to stop it, but I have no way of knowing if they will succeed or not.

There's no negative divergence yet on the bigger time frames, like the weekly and monthly, so a "higher high" needs to happen before a recession can start. That means the market will go higher after a correction of 10%+ while the advance/decline ratio makes a lower high. We aren't there yet, so for now let's just play this day by day and try to catch the next big drop and/or rally.

For today we see the futures down some from the bounce close yesterday. I'm more focused on the DOW versus the SPX as that 29,000 "even level" number is very important for the bulls to hold. If they loss it 28,000 could come pretty fast, which of course puts the SPX well under 3300, it's basically like going to the January 31st low again. That's 28,169.53 on the DOW and 3212.75 on the ES Futures.

I'm 50/50 here on whether we hold 29,000 and bounce or if we dance above and below it a little for several days before dropping hard. If we do a little dance around the level then next Tuesday I think would be the last day the bulls could hold it. Meaning that Wednesday would likely be the start of another leg down in the market.

The bulls need to recapture and make support that 3390 area where it rolled over and started that big drop yesterday. It's about 29,400 on the DOW. If they can retake that zone then the risk of another big drop will be greatly lowered. Otherwise they will just be chopping around making a bear flag for several days until they get overbought enough again on the short term, which I think will be by the close next Tuesday. That's 3 days for the bulls to get going again. Have a great weekend and may God bless you.

On another note. If you ever think your life sucks because you can't seem to win at trading and you've lost more times then you can remember (been there... done that), you should hear this womans story as then you'll be super grateful for what you still have.