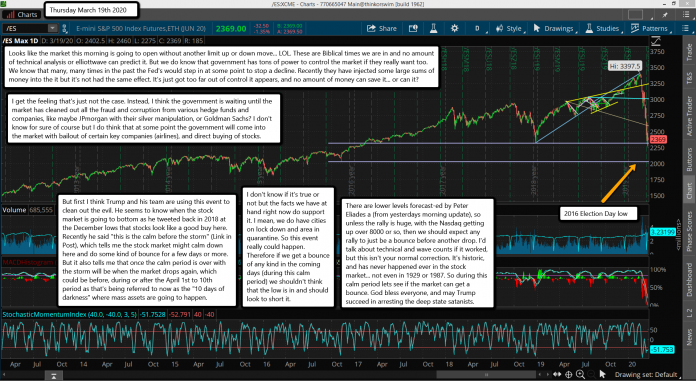 Looks like the market this morning is going to open without another limit up or down move... LOL. These are Biblical times we are in and no amount of technical analysis or elliottwave can predict it. But we do know that government has tons of power to control the market if they really want too. We know that many, many times in the past the Fed's would step in at some point to stop a decline. Recently they have injected some large sums of money into the it but it's not had the same effect. It's just got too far out of control it appears, and no amount of money can save it... or can it?

I get the feeling that's just not the case. Instead, I think the government is waiting until the market has cleaned out all the fraud and corruption from various hedge funds and companies, like maybe JPmorgan with their silver manipulation, or Goldman Sachs? I don't know for sure of course but I do think that at some point the government will come into the market with bailout of certain key companies (airlines), and direct buying of stocks.

But first I think Trump and his team are using this event to clean out the evil. He seems to know when the stock market is going to bottom as he tweeted back in 2018 at the December lows that stocks look like a good buy here. Recently he said "this is the calm before the storm" (at 24:40 into this video), which tells me the stock market might calm down here and do some kind of bounce for a few days or more. But it also tells me that once the calm period is over with the storm will be when the market drops again, which could be before, during or after the April 1st to 10th period as that's being referred to now as the "10 days of darkness" where mass assets are going to happen.

I don't know if it's true or not but the facts we have at hand right now do support it. I mean, we do have cities on lock down and area in quarantine. So this event really could happen. Therefore if we get a bounce of any kind in the coming days (during this calm period) we shouldn't think that the low is in and should look to short it.

There are lower levels forecast-ed by Peter Eliades a (from yesterdays morning update), so unless the rally is huge, with the Nasdaq getting up over 8000 or so, then we should expect any rally to just be a bounce before another drop. I'd talk about technical and wave counts if it worked, but this isn't your normal correction. It's historic, and has never happened ever in the stock market... not even in 1929 or 1987. So during this calm period lets see if the market can get a bounce. God bless everyone, and may Trump succeed in arresting the deep state satanists.