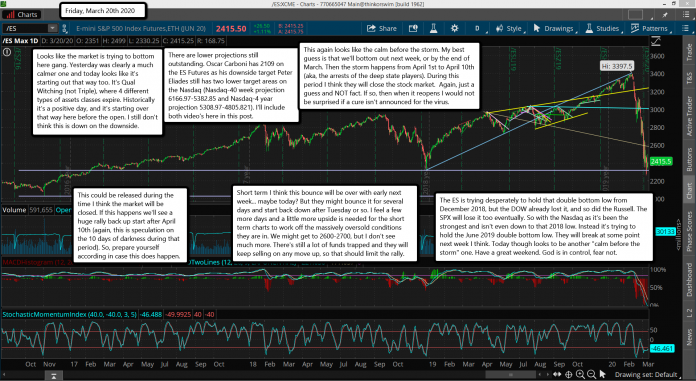 Looks like the market is trying to bottom here gang. Yesterday was clearly a much calmer one and today looks like it's starting out that way too. It's Qual Witching (not Triple), where 4 different types of assets classes expire. Historically it's a positive day, and it's starting over that way here before the open. I still don't think this is down on the downside.

There are lower projections still outstanding. Oscar Carboni has 2109 on the ES Futures as his downside target Peter Eliades still has two lower target areas on the Nasdaq (Nasdaq-40 week projection 6166.97-5382.85 and Nasdaq-4 year projection 5308.97-4805.821). I'll include both video's here in this post.

This again looks like the calm before the storm. My best guess is that we'll bottom out next week, or by the end of March. Then the storm happens from April 1st to April 10th (aka, the arrests of the deep state players). During this period I think they will close the stock market.  Again, just a guess and NOT fact. If so, then when it reopens I would not be surprised if a cure isn't announced for the virus.

This could be released during the time I think the market will be closed. If this happens we'll see a huge rally back up start after April 10th (again, this is speculation on the 10 days of darkness during that period). So, prepare yourself according in case this does happen.

Short term I think this bounce will be over with early next week... maybe today? But they might bounce it for several days and start back down after Tuesday or so. I feel a few more days and a little more upside is needed for the short term charts to work off the massively oversold conditions they are in. We might get to 2600-2700, but I don't see much more. There's still a lot of funds trapped and they will keep selling on any move up, so that should limit the rally.

The ES is trying desperately to hold that double bottom low from December 2018, but the DOW already lost it, and so did the Russell. The SPX will lose it too eventually. So with the Nasdaq as it's been the strongest and isn't even down to that 2018 low. Instead it's trying to hold the June 2019 double bottom low. They will break at some point next week I think. Today though looks to be another "calm before the storm" one. Have a great weekend. God is in control, fear not.