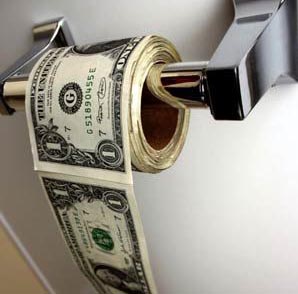 The UUP (dollar index) was halted today as they released another 100 million shares into the market place.  This caused the price to swing wildly, and should adjust back to normal in a few days.  The markets didn't react negatively as they usually do when the dollar rallies.  This seems to be the norm these days, as the market ignores everything negative.

However, there is a lot of resistance right where we closed today around the 1066 spx area.  It might just spike up to touch the 1073-1076 area, and then reverse into the close.  It all depends on the volume tomorrow.  Today had 174 million shares traded on the spy.  Once again, light volume equals an up market.  So, at this point, I have to say that we are looking like Scenario ONE is in play after all.  Friday's usually have light volume, so the market could continue up tomorrow.

The only wild card is a bad jobs number.  But, I seriously doubt that Obama will allow any really  bad numbers to be told to the public.  He will have his accountants get out their erasers and a new number will magically appear.  Funny how over 500,000 NEW People get laid off every week, but the continuing un-employment claims barely moves up.  I guess 499,000 people get hired too each week. LOL!

Anyway, expect more rallying tomorrow as the marine that killed a bunch of people reduced the un-employment numbers... which is good for the market, right?  The insanity continues I guess... Of course I went short today around 1062, and I'll look to close that out tomorrow on any dip lower.  I'll have to wait untill Monday to go short again...