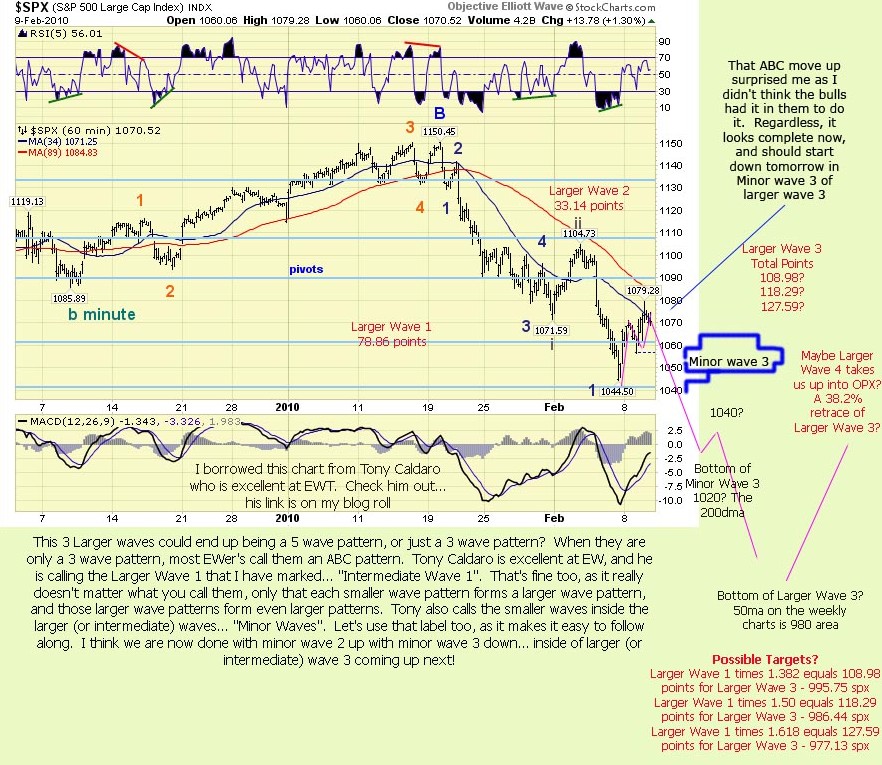 I was really looking for the market to roll over hard today, and it looked like it was going too... until some news rumor was released that said they were going to bailout Greece.  That news was all the excuse the market needed to rally up to that 1080 level that I thought it could go too, but was highly unlikely.  The news said that Germany was going to bail them out, and then it was later reported as false.  Coincidence?  Maybe?  Or, maybe it was designed to shake out all the bears?

I really didn't think it had the energy left to rally up that high, but the market will fool you when you least expect it too.  This doesn't change my belief that we are going down... it only delays it for another day.  Looking at the chart below, you can see that we tagged the upper trendline around 1080, and we are now getting ready to start minor wave 3 down, inside larger/intermediate wave 3 down.

Once it starts, it should fall quite fast, and not allow any bears to get short.  That's probably why they ran the tape up today too... to squeeze out all the bears, and suck in some more bulls.  I didn't see this move coming, or I would have waited for it.  Of course if I had seen it, they wouldn't have done it.  Just the way they like it... trick everyone.

From looking at the charts, it appears that they must start minor wave 3 down, (inside larger/intermediate wave 3) tomorrow, as they've hit their upper target zone now, and must either bust threw it, or fall hard.  There is no doubt that we are at a crossroads here, and either fall hard or rally hard.  I have too trust the charts, and they still point down.

That's why I remained short today, even though that ramp up put my positions underwater a little.  These wave 2 up's are always violent and are designed to shake out the bears.  I remain short, and un-shaken.  I still see this week as down, with a fore-casted low of 1020.  No one said trading was easy, and no one is always right.  I was wrong on Monday being a huge down day, and wrong again on today selling off.

Could I just be off a day or two?  I believe so, and hope so... Even though "hope" is a useless emotion, and shouldn't be brought into trading... I'm crossing my fingers on this one.  The thing that keeps me confident is the Technical Analysis.  It still is extremely bearish on many, many charts.

The fact that the market couldn't break through 1080 was huge, as that resistance held firm.  There are 3 different trend lines intersecting at that level.  It's going to have too gap above it to break through it.  That means some commitment on the bulls, and I just don't see it.  The volume going up was so low, it wasn't hardly reading on my charts, yet the sell off volume was huge.

That tells me that retail traders bought the Greece rumor and drove up the market, and big intitutions sold it.  I'm not buying into this rally.  It may seem like I'm being stubborn, but I'm not.  I'm just sticking to my belief in what I see in the charts... which is bearish still.

As you may know, I use a lot of different ways to see where the market is going.  I use Technical Analysis, Elliottwave, Support and Resistance Levels, and tie all those together with news events.  They all still tell me we are going down.  Right or wrong, I stick with my forecast.  I remain short.