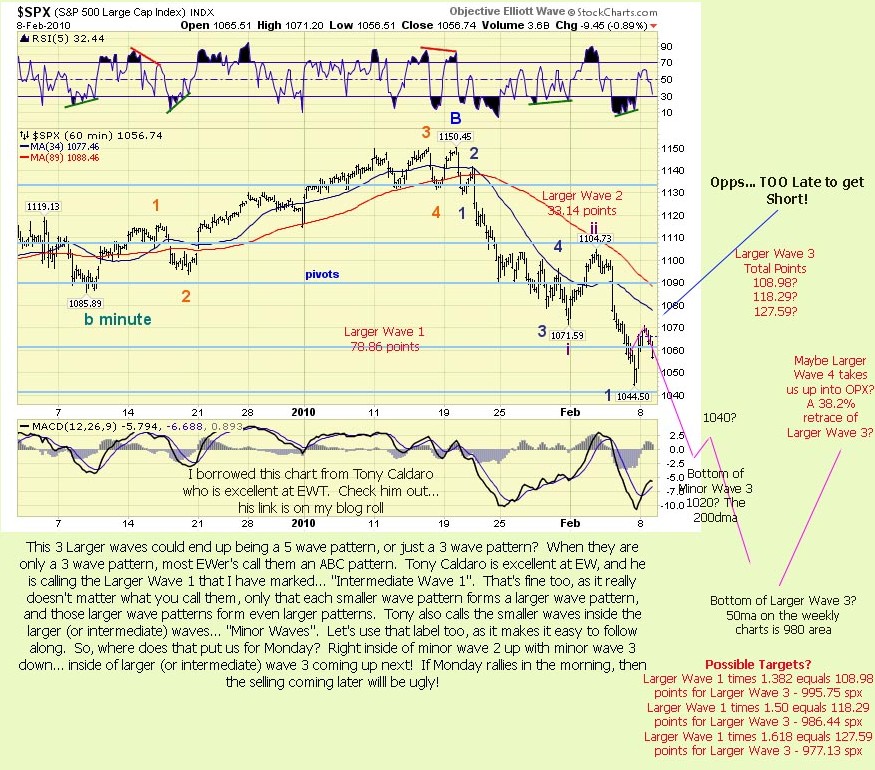 On Friday I overlooked the 60 minute chart, which threw the Black Monday off by a day (that's assuming it falls hard tomorrow, as I'm expecting it too?).  Yes, it did go down today, but the larger down day should be tomorrow.  It took most of the morning for the 60 minute chart to rise back up and then start to roll back over to the down side.

This formed our minor wave 2 up, inside larger/intermediate wave 3 down.  For tomorrow we have the Monthly, Weekly, Daily, 60 Minute, and 15 Minute charts ALL Point Down!  If this market doesn't sell off at least 200 points on the Dow... I'd be shocked!  I'm really expecting a 300-400 point sell off... a Black Tuesday instead!  I should have seen that on Friday, but I review so much material that I just missed it.  Arrrggh!

So, I got in a little early, but I'll still profit handsomely as the next move down occurs.   Here's a chart of where we are now, and what I'm expecting...

It looks like we just completed minor wave 2 up, inside larger/intermediate wave 3, and are ready to start going down hard tomorrow.  While it is possible that minor wave 2 up isn't done yet, as it could make an ABC move up to 1080 or so, I don't believe it will.

The only thing that could delay the move down is that the market could be waiting for the job's number on Thursday.  But, I really doubt that they are going to rally up into Thursday number's.  Instead, they fear bad numbers, so they would sell off before hand.

The charts are saying that we have a 300-400 point drop tomorrow, but I don't like to call out number's... only that the odds of a big down day is quite high.  Doing the charts, and looking at the wave count, it goes like this...

So, from looking at the charts, counting EW's, finding support and resistance levels, and tracking the MACD's on all the charts... they all point to a large down day tomorrow!  Could it be "Black Tuesday", instead of Monday?  Possible I guess?

Let's look for news that can cause the event to happen.  MobyDoc just posted this link on my weekend post.  It's talks of another terrorist attack on the 11th, or something bad?  When the market reads this news, are they going to rally until Thursday to see if it happens, or sell like a bat outta hell before they get caught long?  I think you know the answer to that...

I've spoken about the "False Flag" events on my weekend post.... in the comment sections.  I'm going to post a video here for you to watch.  It's a long video, but well worth your time.... as we don't have a lot left.  I know that some of you might find it hard to believe in Aliens and stuff... but it's all real, and what happens affect the stock market.

There is now hundred of ships off the coast of Yeman.  They are from every nation in the world that has a Navy.  What are they doing there you ask?  There is a Huge Stargate (yes, like on the TV show) under the sea that is opening and the world elite is worried about it, and are most likely trying to stop it.  Supposedly it is going to render all the world's weapons worthless, and not able to work anymore.

Of course the world elite don't want that to happen as that would make everyone in the world equal, and they couldn't use us as their personal slaves anymore.  No more money needed, as the world goes through a positive transformation.  This is a good thing... for everyone who is honest and good, but a bad thing for the evil people who run the planet.

We are about to go through a wonderful transformation on, or around December 21st, 2012.  Call it Heaven for us good people, and Hell for those bad people.  Your religion isn't important, only what kind of person you really are "on the inside" is what's really important.

So, how do you keep the people away from the Gulf of Aden, (which is right off the coast of Yeman)... you stage another terrorist attack, which are better known as "False Flags". Read this...

It keeps every one away while you all work to stop the Stargate from opening, or try to control it some how?  What they don't understand, is that the ending story was already written in the Bible... and the good guys win, the crooked banksters, gangsters, thugs, Illuminati, or whatever you what to call them... LOSE!

Of course they need to pay for the next staged war that we are going into, and how do you do that?  Crash the stock market of course.  Still think I'm nuts?  Again, when is a conspiracy NOT a conspiracy?  When it's true of course...

Here's on more interesting video for you... (by the way Goldman Sachs and the Carlyle group are co-owners of Kinder Morgan)

Are you starting to put the pieces together yet?