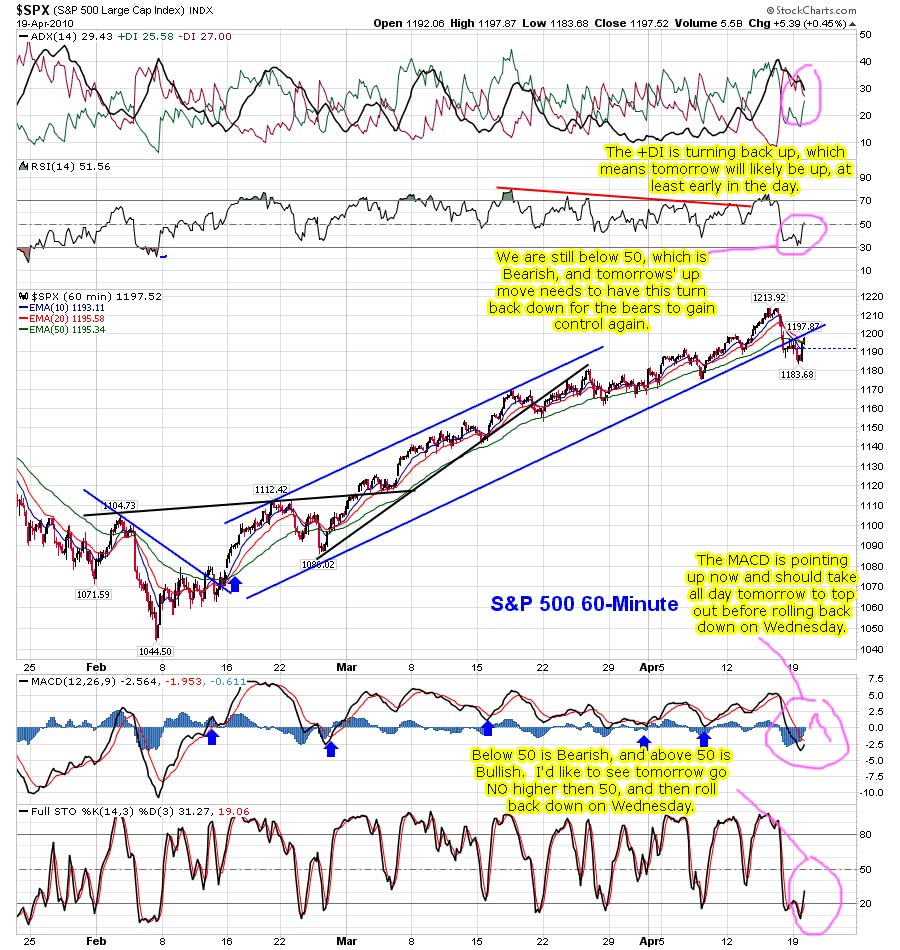 The bulls recaptured lost ground today, as the weekend allowed the media to spin the Goldman Sachs story as a non-event.  We know differently, as where there is one roach... there's always more!  Nothing is ever easy in trading, and you can bet that this coming correction is going to be full of bounces along the way.

Looking at the 60 minute chart of the SPX, you can clearly see that we finally busted out of the trendline from the 1044.50 low.  We are now in "backtest" mode, and will likely try to recapture the trendline tomorrow by closing inside it once again.

That doesn't mean it's over for the bears, as the daily chart tells a different story.  Looking at it, you can see that the -DI line (in Red at the top of the chart) has clearly spiked higher from Friday's sell off.  The +DI (in Green) is also losing power and pointing down.  You can see that the RSI has dropped out of the "above 70" range, which means the up trend is losing steam.  I'd like to see it fall below 50 for me to confirm that the bears are in control, but it's a start at least. 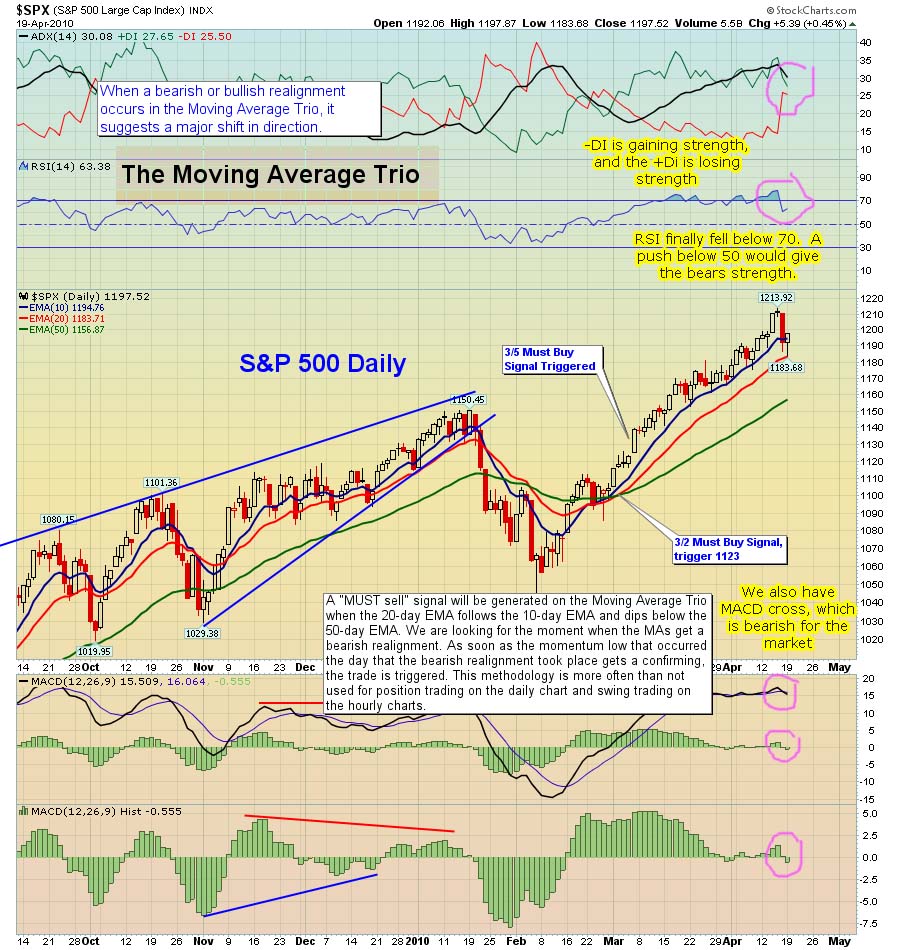 So, at this point, I'm not going to say that we aren't going back up and make a new high, as it still could happen, but the odds are slowly going down.  We could have another sideways, wild swing, up and down movement similar to the November 9th to Mid-December time period.

I don't think that will happen, but it is possible.  It really depends on what the "powers that be" want to do at this point in time?  Do they want to go straight down to the fake print around 10,000, or drag it out sideways, and run up to 11,816 first.

Personally, I believe that the release of the news on Goldman was just a start of the coming news to be released over the next few weeks.  I can't be sure, but if I recall what was "in the news" during that sideways chop fest in November and December... it wasn't anything majorly negative.

That makes me lean more on a quick 3-4 week sell off, as they didn't just release this news on Goldman for a one day event... at least I don't think they did?  I'm sure it's possible, but usually they toss a bunch of negative news out there when they want to sell it off, and then pump positive news when they want to rally it up.

Bottom line here... it's all about what news and earnings come out this week.  If they make them positive, the market could chop sideways for weeks, until it finally pops out of the range and goes on up to 11,816.  Or, they could dump all the bad news over these next few weeks, and cause the sell off.

I'm sure that Goldman wanted their stock to tank, so they could buy it back cheaper.  Who knows how much phantom stock they sold to the public?  If you read the story Matt Taibbi published, that I put up on yesterday's post, you will see how they borrowed shares that didn't exist, so they could bankrupt Lehman Brothers.  I'm sure this is a common occurrence for them.

But, at some point, the phantom shares must be put back into the phantom vault.  That's probably why they tanked their own stock, so everyone holding shares of it would sell them at the "now heavily discounted" price.

In a way, it reminds me of a friend of mine that owned a "buy here, pay here" car lot.  People would buy the car at over inflated prices, (because they had bad credit), and then pay higher then normal interest rates, with payments on a weekly basis, instead of monthly.  Once they missed a payment, he would repossess the car, which would then be sold again to another sucker.

He got the car back at a discount, because the person did pay some of the weekly payments, and of course some type of a down payment.  He could re-sale the same car multiple times, and do the same thing every time.  Some cars he re-sold 7-8 times!  He made a good living that way.  Of course the difference between his business and what wall street does to the average investor, is that the people that buy the car do know the risks, and the late payment results.  Wall Street lies, cheats, manipulates, and does flat out fraud to steal peoples' money.  Big difference there...

Anyway, I'm expecting an up day tomorrow... but hopefully not too far up.