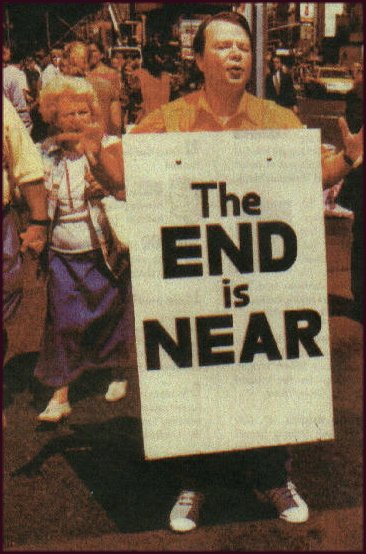 It seems that "The End Is Near" now, as the usual Bullish Monday failed for the first time still the stone age was around... or it least it seems like it's been going on for that long.  Seeing a down day, (even if it is only a few points), on Monday is so rare that I can't believe it actually happened today.

Not that it means anything of value, as the trend UP is still intact.  No damage has been done to the Bullish Charge, that's been going on since February the 5th, 2010.  So, I'm not expecting any large down move tomorrow... so don't get all excited on me.

Yes, yes... it's a POSSIBLE end to the UP trend, but only slightly possible.  We Bears should know by now that this is most likely just a small tease, and not the start of the correction we have been waiting for.  However, it could be the top, but I really doubt it.

The markets seem to be getting more and more boring everyday as the VIX settles into a low range, making trading options about worthless.  Without some volatility, it's hard too trade them the way I like too do.  Still good for day traders of course, but that's just not my cup of tea.

Anyway, at this point, I'm not expecting any large down move tomorrow.  It's looking like it might sell off some, but only based on what the 60 minute chart shows.  It might only sell some in the morning, and rally back on light volume in the afternoon, as it always does.  So I guess we can expect more of the same, until the dam finally breaks.