No Post For Friday Gang.  Go Enjoy The Weekend

It seems I missed out on all the fun, but at least I was short the market... and not long. I'd hate too have been long during the big drop down to 1065, many people were wiped out today.

Look out below, as that's a trader jumping from a tall building! I'm sure there were some suicides today, or will be tomorrow. This isn't over folks... so don't get caught long, as Monday is going to be BLACK MONDAY!

Yes, as the old saying goes... third times a charm! But this time they have told us where they plan to take it. The target is 105.00, and the date is Monday, or possibly Tuesday.

Sundancer was able to catch an after-hours print of 109.65 spy, which is probably the target for tomorrow. But, he also caught a 114.80 print too, which means that a gap up is likely, with the high being 114.80, and then selling off into the close with 109.65 being the low.

Next we have Monday... which will probably just drop all the way to 105.00, and rape everyone who goes long into the close Friday... expecting another bullish Monday. Well it ain't happening this time folks!

It's going to be a Black Monday, so get yourself positioned properly, as you will either get killed or profit like a mad man! Times like these can make you a ton of money, or wipe you out.

Once the 105.00 target is hit on Monday or Tuesday, ever bear on the planet will be awake and going short. The bulls will bailing out too, as it seems the ship is sinking.

Everyone will be calling "P3 is here", and will go short with everything they have... only to watch the market rise back up from the dead and rally without a single pullback, for weeks on end.

If you read this blog regularly, you know how many times I have said that this market is 100% controlled, and manipulated by the "powers that be". So you should know by now that this fake prints are given out to tell all their friends where they plan on taking the market.

Believe it,or not... but it's real. We have been given the road map for tomorrow and next week, as well as the final high in the market (DIA 118.16 - about DOW 11,816). The question is, do you listen to what they are telling you, or do you just call it "Fat Finger Mistakes"?

In case everyone has forgotten, I caught this fake print back in January, but when the sell off happened in February, I forgot all about the fake print. I didn't know if it was real at the time, or just an honest mistake? 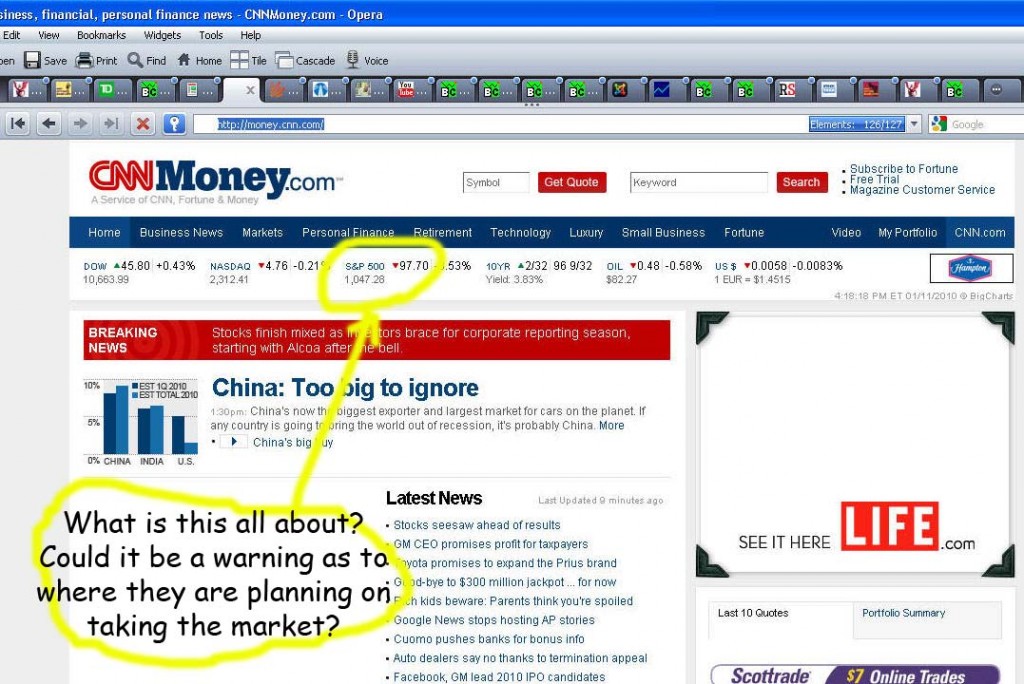 If I'm able to time the entry and exit points over the next few days correctly, I'll recover all I lost and actually make some too.

I hope everyone reading this blog takes these fake prints seriously, as most... maybe not all, do come true. so lets go over the game plan for tomorrow one more time...

Tomorrow has higher odds of a gap up, and move up to the 114.80 area first, and then a sell off into the evening, down to the 109.65 area. But, there is no guarantee that both targets will be hit tomorrow.

At that point, you need to go long, and stay long for the next few months, as our final high is around DOW 11,816. I'm expecting the market to nearly go to sleep after this turbulence is over, and all the bears will go back into hibernation.

I will be around all day tomorrow (Friday), and Monday and Tuesday too. I've rescheduled my appointments, as I don't want to miss out on more of the fun again.

Best of trading to all of you...