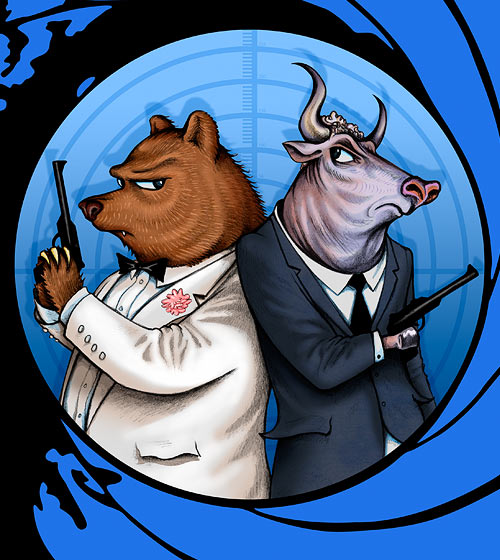 Today started out great for the bears, until about noon when the market found a bottom and reversed hard into the close, end up with a positive day, instead of a big sell off day. Funny thing was, I spotted another fake print on the ES futures at 1135.25, early in the morning, just when the market was starting to sell off.

Sheesh... I have to give to "them", as they had me fooled on that one. Even when I seen the bottoming tail around noon, I thought we would only go up a little bit, and then sell back off into the close. I think the toughest part is figuring out which fake prints will play out... and when? 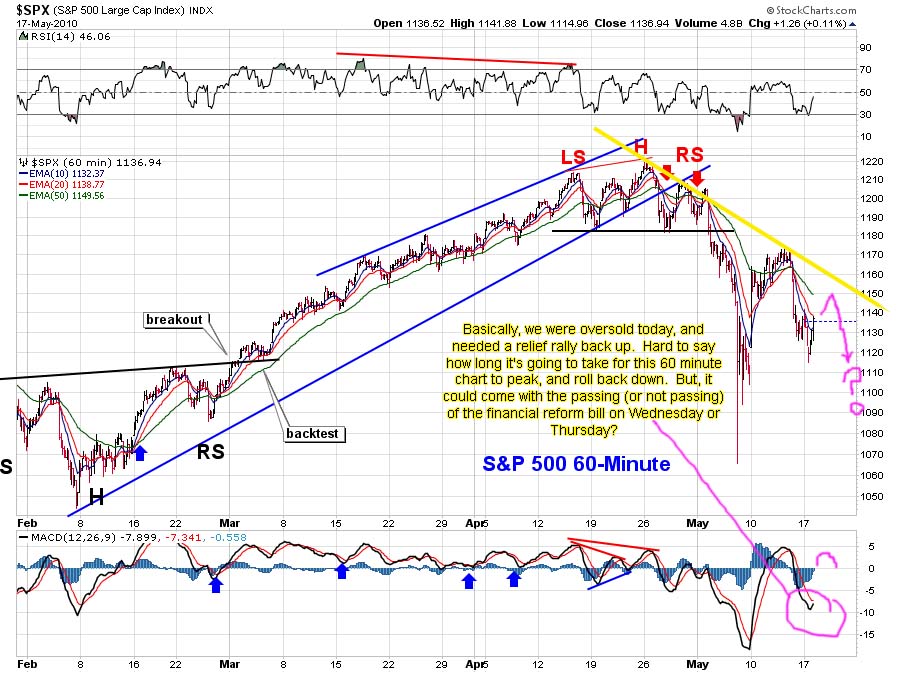 Anyway, as you can clearly see by this 60 minute chart, the market turned back up and is likely to go higher tomorrow until the 60 minute chart rolls back over to the downside again. This could last 2-3 days, if they really want to squeeze out the bears more.

This week is opx week, and it is true that they like to pin the spy on a level that allows them to pay out the least about of money to both put holders and call holders. Unfortunately, the market is heavily loaded up on puts right now.

The ideal place to close this market is 115 spy, as that level has a huge amount of put open interest on it. Of course that doesn't mean that we can't sell off hard again, and rally back up on Friday. I think that should be obvious to everyone now, as the market sold off 25 point today, and rallied back over 20 points of the decline.

Believe me, after seeing what happened last Thursday when the Dow dropped a 1,000 points, and recovered almost half of it in one day... anything can happen. But for tomorrow, the 60 minute chart should push us higher some. How far is any one's guess, as the daily and weekly charts are still pointing down, and should limit the upside some.

There is really no way to tell how high the MACD will rise on the 60 minute chart, before turning back down to the downside again? It could only rally up in the morning, and put in a much smaller histogram tower, and turn back down in the afternoon. Or, it could put in a huge histogram tower, taking 1-2 days to form.

It's probably going to depend on what the dollar, euro, oil, and gold do too... they are a key part of the markets' rally's, and sell offs.

On another note, looking for clues and reasons to cause a sell off to happen this week, the Senate is scheduled to vote on financial reform for the banks on this Wednesday or Thursday. If the bill is pasted, (and again here folks, this bill really won't hurt the banks. It's full of loop holes, and is all about politics and get re-elected), that "might" spook the market and cause another panic sell off.

I'm just reaching out here, as it's probably already factored into the market, or "they" already know the outcome. But again, the banks could dump the market again, blame it on the bill, and get reloaded with new long positions on the drop, by taking out everyone's stops out on the way down... just like they did last Thursday.

They already used the "fat finger" excuse last week, so they need a new one for this week. A financial reform bill, that would limit their profits (at least on paper, it would look that way), could be as good a reason as any to dump the market one more time.

So for tomorrow, I expect some upside until the 60 minute rolls over. If the gets too far back above 1150 spx, then I think the sell off might be over. However, I don't think it will, as I still believe there is more selling coming. I still don't see any signs yet of the daily chart making a turn back up, from a technical stand point. However, from a "candle pattern" point of view, today was extremely bullish.

A hard reversal from oversold territory to end up with a doji candle is something to be taking into consideration. I'd just like to see the candle form at a lower low then the 1065.79 low last Thursday, before I'm convinced that the "bottom" is in. Those candles work extremely well at tops and bottoms of markets.

But we haven't taken out last weeks' low yet, and that still makes me think that the candle is just a bullish candle, but not necessarily a "bullish reversal" candle. There will probably be some continued follow through on the rally tomorrow, and then possible another sell off by Thursday or so... with the blame to be put on the passing of the bill.

All speculation at this point, but it's just what I see in the charts that has me coming to these conclusions. Best of luck to both bulls and bears tomorrow.

P.S.  One more thing... by not having my charting software set to show the last 10 days (as I had it set for 3 days, 10 minute candles), I didn't notice that the 111.77 spy low was almost gap fill from the 111.30 low last Friday.  Had I noticed that, and listened to my instincts, (seeing that fake print earlier in the morning today, about 114 even on the spy), I would have closed up my shorts and waited for this rally back up to get back in at a better price.  But, I missed it... so I'm still short.  Bummer 🙁