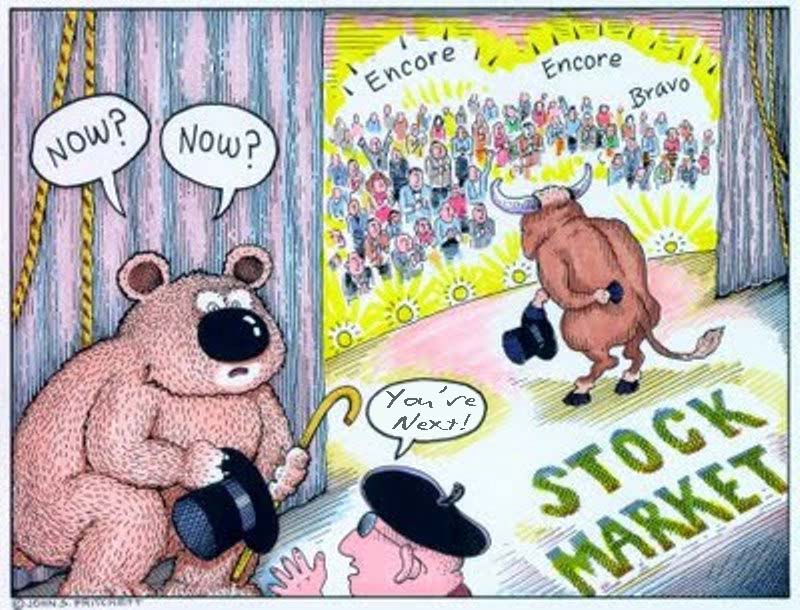 I can't find a single reason to be bullish next week, from any technical point of view.  The only thing I can see positive... is that the typical option's expiration week is usually bullish, but past history doesn't always play out the same in the future. The charts are still very bearish right now, and I think that will overshadow the past history results for a bullish opx week.

With that being said, I don't necessarily think that we will crash on Monday.  We could rally up a little on Monday, and create a smaller wave 2 up, inside of a larger 3 wave down (some call it a 5th wave?).  And then plunge down on Tuesday with a smaller wave 3 inside a larger wave 3, which is what I think will happen.

We are still pointing down on the daily chart, which will continue to put overhead pressure on the 60 minute and 15 minute charts.  Looking at the chart below, you will notice that the MACD lines rolled back down, after briefly pointing up on Monday's rally.  The 10 EMA is still below the 50 EMA, and the 20 EMA isn't too far away from crossing over it too.  The histogram bars are still in negative territory too. 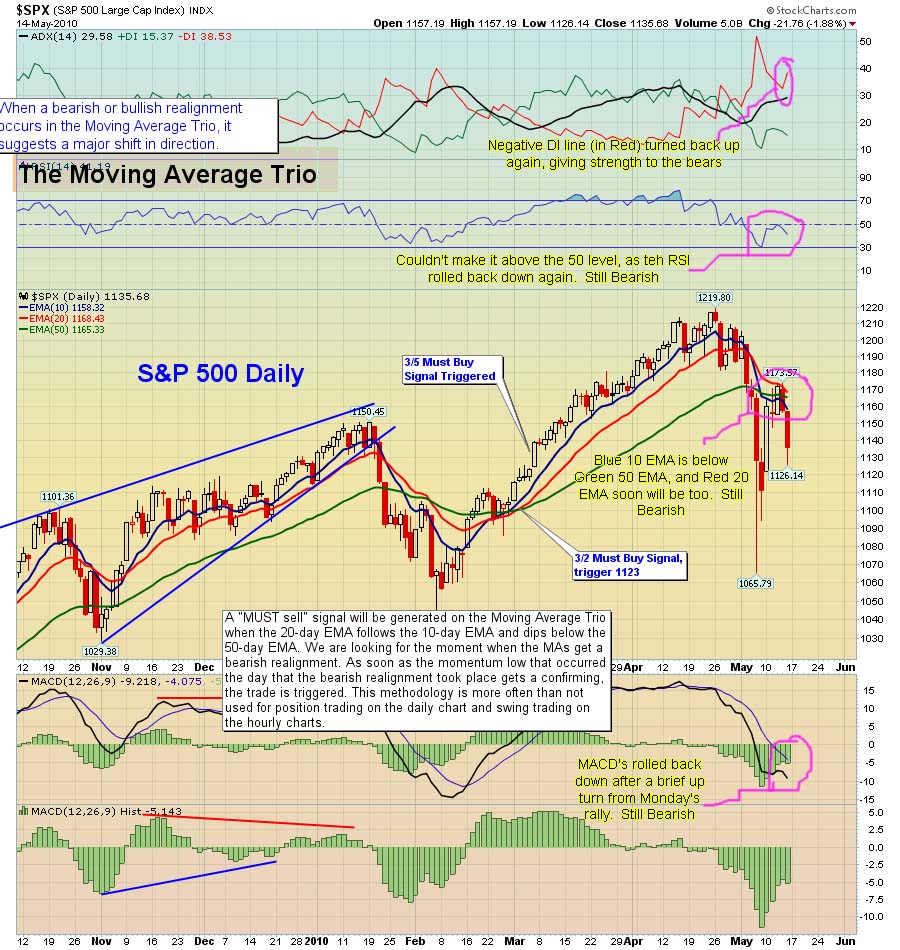 The RSI is still below the 50 level, which means that the bears are still in control.  Plus, the ADX line is now rising again, with the negative DI line (in Red) hooking back up now.  More downside is coming next week... how far is anyone's guess?

Let's look at the 60 minute chart now.  It's has both the 10 EMA and the 20 EMA now below the 50 EMA, which again puts the bears in control.  The RSI is still well below 50, but did hook back up at the close Friday.  This could give the market the smaller wave 2 up on Monday.  However, I don't think it will get back above the 50 level with the daily chart still pointing down. 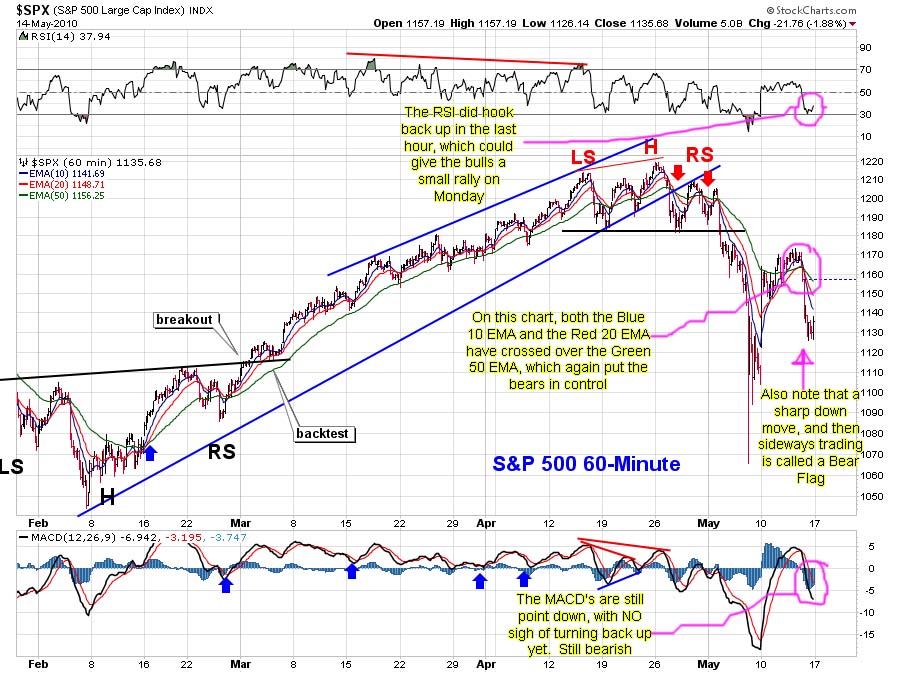 Look at the MACD on the 60 minute chart too, as it's still pointing down, and hasn't hooked back up yet.  It did put in a lower histogram bar during that last hour that the market rallied a little on.  But again, with the daily chart putting downward pressure on it, I don't think it will make it back up to the zero level on Monday.  Maybe it will put in lower histogram bars, but fail to crossover into positive territory.

Now let's look at the 15 minute chart and try to forecast what will happen on Monday.  First off, the early sell off, and then sideways movement, forms a perfect "bear flag" pattern.  Not that they all play out, but if this one does, then an early morning sell off (possible gap down open) could happen.  Notice that the MACD has successfully rallied back up above the zero level, and into positive territory.  There is no way of knowing how high it will form it's histogram bars, before rolling back down, but if you match it up with the RSI above... I'd say it's pretty close too topped. 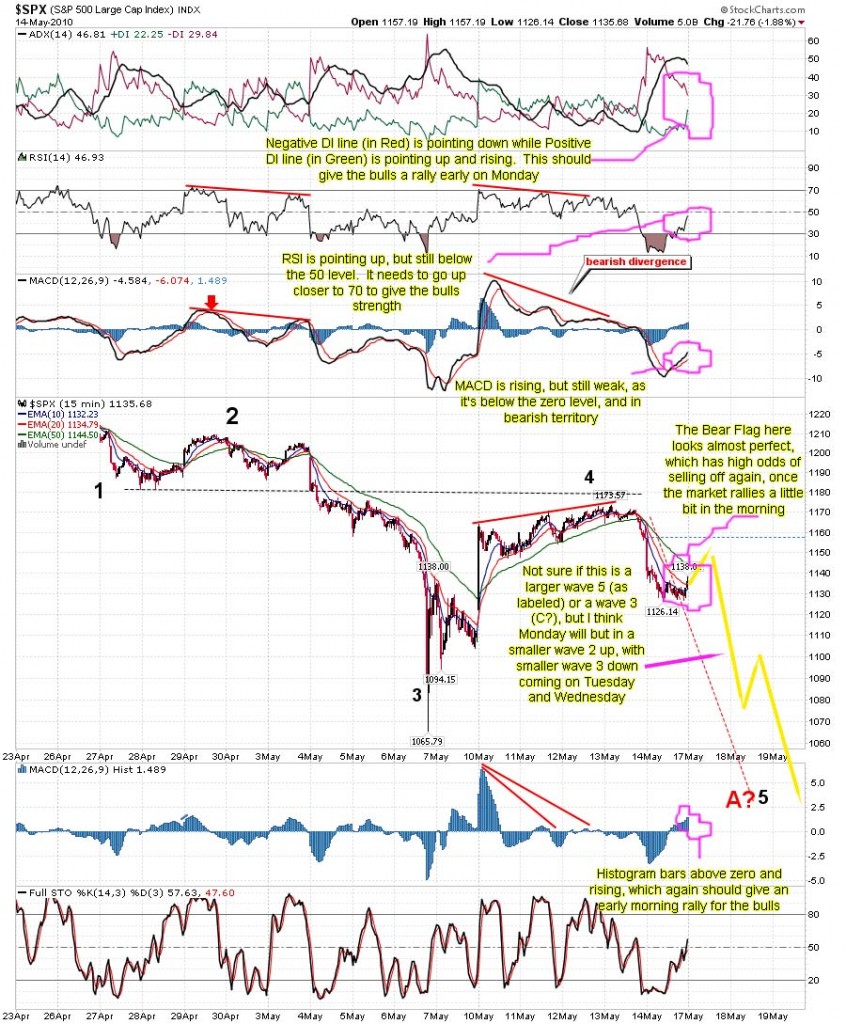 Looking at the RSI, you will notice it rising back up toward the 50 level.  If it can get above it, and push up toward 70, then the histogram bars on the MACD could continue to rise, and the market would too.  The ADX line is rolling back down, and so is the negative DI line (in Red).  The positive DI line (in Green) is rising, giving strength to the bulls.  But remember, this is only the 15 minute chart, at it still has a ton of overhead pressure above, with the 60 minute chart, daily chart, and weekly chart pushing down on top of it.

I think the best scenario a bull could hope for on Monday, is that the 15 minute chart rises back up and forms a smaller wave 2 retracement rally... allowing them to get out of their positions, before it rolls over into smaller wave 3 inside larger wave 3 (or 5?).

Baring that there isn't any negative news about another country (or state... aka California) going into default, then maybe there will be a smaller wave 2 up on Monday?  However, it could have already completed itself on the late day rally (mainly short covering), which in that case... the bear flag pattern will play out, with a possible gap down on Monday.

After this correction is done, I think we will go back up for one final high.  The monthly chart looks almost topped now.  It should roll over in 1-2 months, and then P3 down would be started.  But, for now, we are close to putting in a bottom for this current down turn.  I would estimate that next week (or the following week, at the latest) will put in the bottom for this sell off, and the following week will start a big rally back up again.

So for Monday, it's either going to be a gap down from some negative news, or we rally up a little bit while we continue to form that smaller wave 2 retracement.  Either way, Tuesday and Wednesday will look horrible for the bulls, as a wave 3 of a wave 3 down will occur.  It's going to be Bloody...