As the Bulls and Bears both got whipped around today... 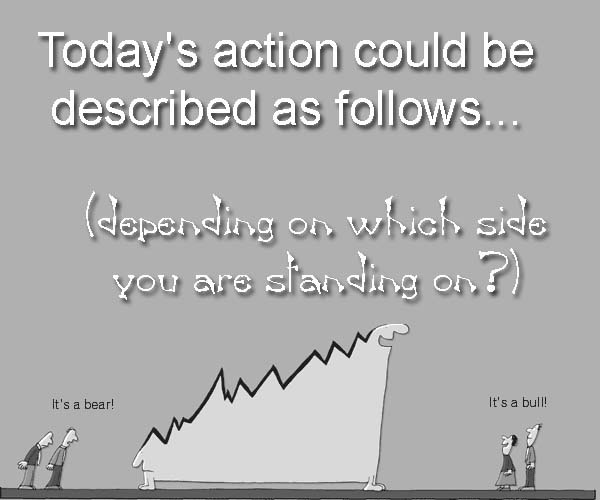 After so many days down in a row, you should expect some sort of "pause" day, and today was exactly that.  The market stayed in a loose range swinging up and down all day, until it sprouted some roots and grew a little into the close.  But over all, today was simply painful for both sides.

The 60 minutes charts and the 15 minute charts were previously oversold, and now they have worked that all off.  The 15 is now overbought, but the 60 still has some room to run higher tomorrow.  Whether or not the tape will follow it higher is not known?  If it does, then the 1070 area is about the expected high level target I could possibly see, before both charts are overbought again.

Once they become overbought, I expect to see some heavy selling as the daily, weekly, and monthly charts will also be pointing down... making the move down even deeper.  It's hard to say how high up the histogram bars will go, before turning over to the downside, but I expect it to be a small tower because of the downward pressure from the daily chart.

When you look at the 60 minute chart, you will notice that while the histogram bars where moving up, the price was trading sideways (except the pop higher at the end of the day).  This tells me that the daily chart is still putting pressure on it, and holding the price level down.

It basically means that there are still too many bulls trying to get out, and are waiting to sell at each pop higher.  The last pop at the end of the day, means that most of the sellers for the 1055 level are now gone.  There will be more sellers waiting at a higher level now, with 1065-1070 being a likely next target.

I don't see the market getting much higher then that yet, at least not until the daily chart turns back up and provides support to the 60 and 15 minute charts.  Unfortunately for the bulls, the 60 will be overbought by midday tomorrow, and another leg down should start into the afternoon session.

The daily chart is the key to getting a big rally up started.  It's kind of trading sideways to slightly down now, and could easily rollover to the downside and create a big move down... or hook back up and create a 3-5 day rally.  But I believe that in order to get the chart to hook back up, there needs to be some good news released to spark it.  What would that be, I wonder?