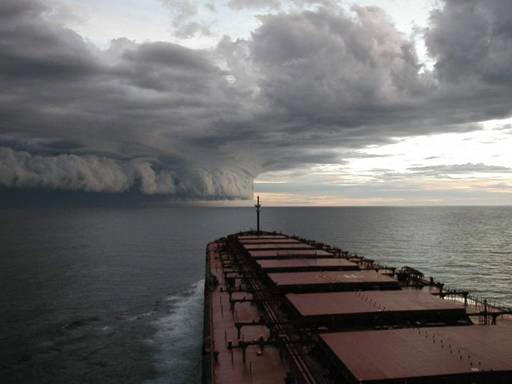 No long post today, as nothing has change.  We had a another "pause" day, and anything could happen tomorrow.  The 60 minute chart has now become overbought , and can rollover at anytime.  The daily chart is forming a bear flag, and could drop another large red candle down as early as tomorrow.

It's really hard to say about tomorrow.  I could easily see a gap down to fulfill the bear flag, but if it fails, a large up day could also happen.  You can see the bear flag, if you're bearish, and you can see considation if you are bull.  I'm still very bearish, but I'm weary of surpises by the government.

The weekly chart tells me we should go down again, and put in another red candle, but again... the market could go either way right now.  I'm still very bearish of course.  However, some good news could easily spark a rally, so bears be careful.  We are truly in "no mans land" right now...

P.S.  Sorry I wasn't around any, I was on the road driving all day.

The calm before storm...

Friday was basically a flat, as market shuffled companies around to re-balance the Russell index.  Overall though, the market still looks extremely bearish.  The technical pictures looks worst now, as the 60 minute chart has finally worked off the triple bullish divergence, by going positive (above the zero line), but now looks ready to roll back down again.

That's bad news, if you're a bull.  While it could go up a little more on Monday, it's going to be really hard too go very far.  The 15 minute chart is headed south again, and of course the daily, weekly, and monthly are still pointing down.  So while anything is possible, the charts tell me Monday should fall hard... especially when that 60 turns back down.

It could be rolling over already, and we could have a gap down on Monday, or it the 60 could push a little higher before rolling over.  So, while my gut warns me of a possible gap up and rally for several days (or weeks), the charts tell me otherwise.

That's one of the hardest things to do... follow what the charts tell you, and ignore your gut, unless you are Anna, who has an amazing ability to be right, by listening to her "gut instinct".  Of course she uses charts too, but when it's time to pull the trigger, it's her gut that she listens too.

I have to hand it to her, she makes a lot of great calls that way.  But I,on the other hand... I get killed listening to my gut.  So, the chart tell me that we could finally have that "Black Monday" that I've called for too many times (and been wrong each time), while my gut still worries about a gap up on Monday.

That goes to show you how good of a job they do of training us sheep to do the opposite of what they do... so they can take our money of course.  How else can they stay rich and powerful, while we struggle to make ends meat?  The market was designed and created to take money from the unsuspecting sheep (public... aka, the retail traders - as in you and me).

So, should I listen to what all the technical analysis, astro, elliottwave, etc... tell me?  Of course I should, but will I?  Well, I did this time (LOL), but I can't guarantee I'll always listen.  Turning off your emotions is the hardest thing to master... and I haven't master it yet.  I'll make more stupid emotional decisions in the future, I'm sure of that.

But for now, I remained short... based on the charts, not my emotions.  Nothing in any chart or pattern I see can justify a gap up and rally on Monday.  Sure, we feel like the market is oversold now, because we fell hard 4 days in a row, and closed flat today.  But the charts say the market isn't oversold yet, but still has room to go much lower.

It's times like these that test your will power as a trader.  After all, chasing a falling knife isn't a wise thing to do.  But, neither is going long when after a huge run up.  But, if the charts say there is more room to run (up or down), then you just have to do it.  They call it "Buying Overbought and Selling Oversold"... but the great thing now, is that we're NOT oversold yet!  Can you believe that?  After all these days down, the market isn't even in oversold territory yet.

That should make you feel even happier about going short today, as the daily chart is just now at the zero level with the histogram bars and the MACD's are just now ready to roll over and head back down south.  While they could turn back at anytime, I believe we need a capitulation day first... before any big rally can occur.

On the bullish side, the weekly chart is working it's way back up, from oversold conditions.  But, the bearish engulfing candle put in on that chart indicates that we will have another down week.  If this week goes down the first few days, and then rallies back later in the week, then it could end with a doji candle.

That would allow the following week to rally up, and work on putting in a lower (positive... aka, above zero) histogram tower on the daily chart, then the previous tower.  But for this week, I expect the daily to cross below the zero line for at least a few days, putting in a small (negative) tower.  Then again, it would go back up next week and rally the market.

But this week should go down early and rise back later in the week.  Will it?  Who knows, but that's what the daily chart indicates it is likely to do.  It would also match up with the weekly chart, as it is putting higher lows on the negative histogram tower, slowly working it's was up to the zero line and above.  However, on the weekly chart, I think it will just barely make it above the zero line before rolling back down in August.

So, now that you are totally confused, I'm bearish on Monday and maybe Tuesday, then bullish for a week or two.  That's what I see in the charts, but my gut tells me that it's going to rally on Monday and not stop for a couple of weeks.  I choose to ignore my gut, and go with the charts.  So, I'm short into Monday.

If Monday opens up, then I expect it to rally up a little in the morning, to allow the 60 minute chart to put in a few more positive histogram bars.  Then, I expect it to roll over and tank into the afternoon and early Tuesday morning.  While the market is turning bullish on many indicators right now, it still has just as many that are bearish too.  That's why it's so tough to forecast this weeks' move.  A big rally is coming soon, but I think we need  a big down day to have capitulation first.  Whether we get it or not, is anyones' guess?

Sorry for late post gang.  I had internet problem, and was down for awhile.  But, I finally got the video uploaded to Youtube...