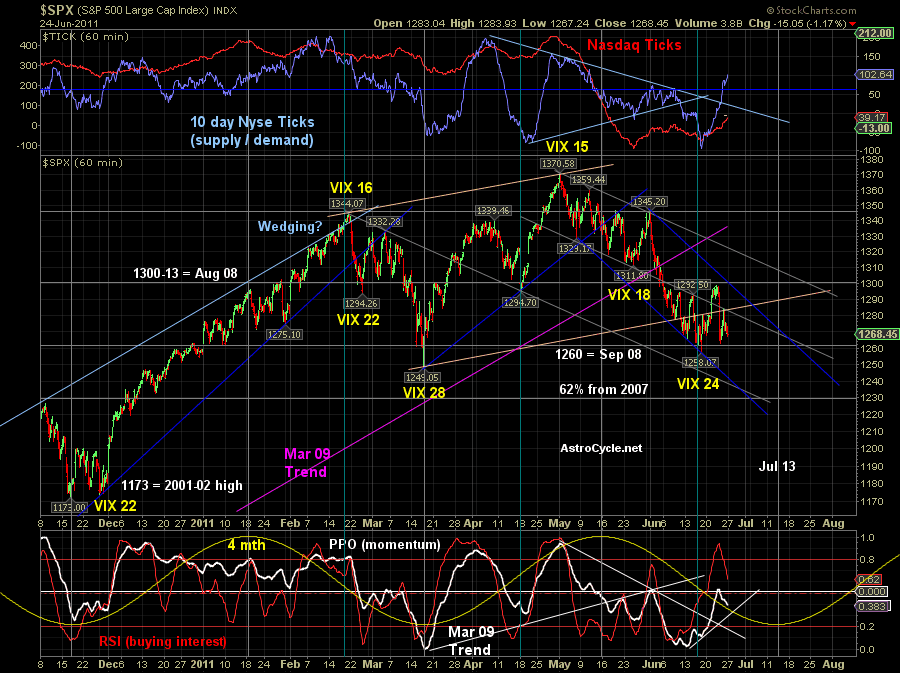 Will the market bounce on Monday... I don't know?  It could crash, as the charts are still very bearish right now!

However, many of the indexes have actually hit their double bottom support levels from the first week of March early this year.  The S&P500 is one of the few that still hasn't hit that 1250 area, which means that we could still see some more selling early next week.  But, I do think that we are near a short term bottom before a nice rally back up to form a wave 2... and then one nasty wave 3 down!

If we do sell off some more next week it would likely be a final wave 5 down inside this larger wave 1, and should find support at the 1250 area.  This doesn't mean it won't pierce through it on some type of "flush out" move, cleaning out all the stops the bulls have just waiting to be cleared.  I'm just not sure if they want to clear them out now, or rally first and then go back down later?

It's a tough call as the market is resting on the 200dma on the daily chart, and should have a multi-day bounce from it.  But, it looks like it already had the mulit-day rally from the first hit, therefore the second time is a weaker support level that could be broken very easily... especially when you notice that on a weekly chart the 50ma is coming in at 1235 and should act like a magnet for the market to hit.

That leads me to believe that we could see more selling early next week before any relief rally starts.  The only wildcard is if they come up with some perceived fix for the Greece problems... (or some surprise stimulus put into the market).  Right now I just don't see it happening... which makes me believe that we are likely to continue down more next week, before any relief rally.

While I'm looking hard for a reason for the market to bounce, I'm not finding any.  Yeah, we should rally, and yeah we're over sold on many charts, but I'm having my doubts on any rally coming until we go lower first.  I'm a bear in disbelief right now, as it doesn't look like the same market we've seen for the last 2 years, where every sell off was met with a wall of bulls pushing it back up.

Did they all die when the stimulus money ended?  It certainly looks that way now.  I'm beginning to believe that "oversold" can stay "oversold" for much longer then we think it can... much like the last 2 years with all the "overbought" being ridiculously "overbought" to the point of insanity for any trader to believe.  I guess we have truly (and finally) started Primary Wave 3 down, as the market just feels different this time around... don't you agree?

As for the short term charts, they are all mixed.  The 60 minute is pointing up, the 30 minute down.  The daily is pointing down too, but from oversold levels.  I'm just not sure what to think about Monday?  It could go either way.  If there is light volume, the bulls could close the day positive... but if the bears want to attack, the bulls will retreat very quickly!

The bulls are seriously wounded right now, as a whole lot of technical support levels have been broken.  The bears are in full control, and only if they decide to take a day off and rest will the bulls regain any ground... and somehow I don't think they will rest until the 50ma is hit on the weekly chart.

This chart below (from Astrocycle.net) shows an interesting correlation with the current bottom and vix level of 24, with the previous bottom and vix level of 28.  This could mean that one final move down (in some type of 5th wave, inside of a larger wave 1 down) is yet to follow.  The question is... will it come early this week and then rally back up, or rally up a little first and sell off later in the week? 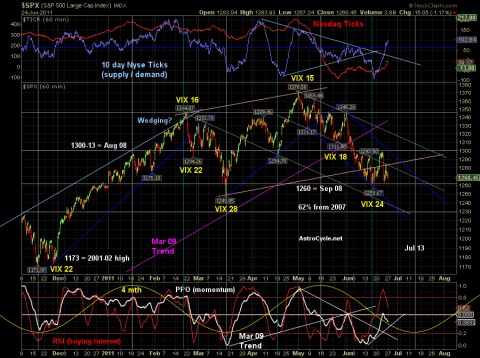 Another interesting thing on the chart is the blue and red tick lines at the top of the chart.  Reading them I would come to the conclusion that a move up would happen first.  This is the 60 minute chart, so if it does move up first, it shouldn't last more the a day or two.  Not shown on the chart is the next moon cycle on the 3rd of July, which could be another turning point... meaning that we should put in a bottom or a top.  I don't know which, but if we go up early in the week, and then back down... I'd say a bottom.

Of course the opposite is true if we sell off to the 1235 area first and then rally into the first week of July, as then I'd expect a top to be put in around that moon cycle, followed by a much larger wave down to follow.  All in all, I'm just going to say that calling the short term direction right now is a very tough call.   But, a lot of evidence points to the high being put in, and Primary Wave 3 down starting... meaning, sell the rip's is the new theme!

On the darkside... nothing much worth mentioning right now.  The old cabal gangsters are still in control, but slowly being pressured out.  More recently they fled in fear from the Bilderberg meeting under threat of arrest... the first time ever!  LOL!  Here's the latest interview Ben Fulford did with Jeff Rense.

That's it for now gang.  If you find an interesting story, email me it and I'll put it up here on the blog.  Good luck as usual...