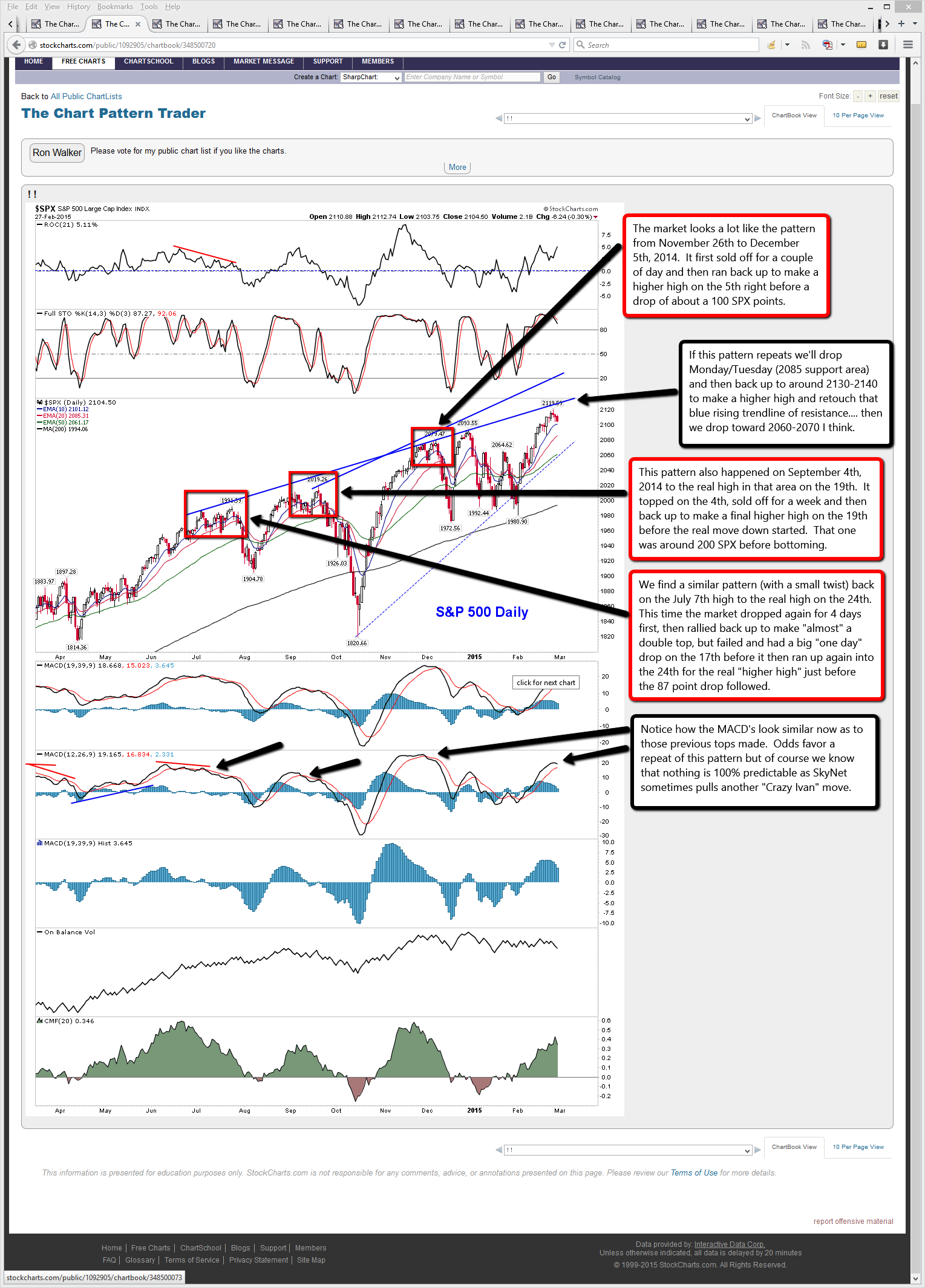 But if so the next move up should be a huge one...

The market looks a lot like the pattern from November 26th to December 5th, 2014.  It first sold off for a couple of day and then ran back up to make a higher high on the 5th right before a drop of about a 100 SPX points.  This suggests we'll end the down move Monday/Tuesday (the 2085 area is good support) and go back up into the end of next week topping in the 2130-2140 area.

This pattern also happened on September 4th, 2014 to the real high in that area on the 19th.  It topped on the 4th, sold off for a week and then back up to make a final higher high on the 19th before the real move down started.  That one was around 200 SPX before bottoming.

We find a similar pattern (with a small twist) back on the July 7th high to the real high on the 24th.  This time the market dropped again for 4 days first, then rallied back up to make "almost" a double top, but failed and had a big "one day" drop on the 17th before it then ran up again into the 24th for the real "higher high" just before the 87 point drop followed. 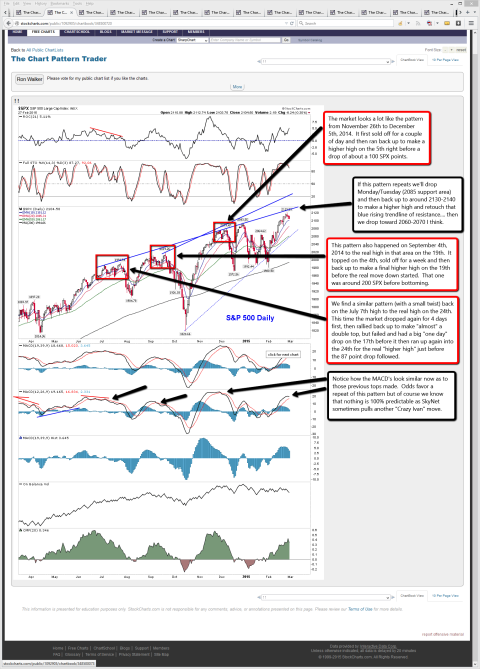 Looking back even further in time I can see this pattern showing up many times with slight twists to it.  Sometimes it did it's first drop for 2-3 days, then back up to a new high and other times it took over a week for the first drop to end.  And some of the times there were 2 short drops before the final higher high with the real big drop that followed.

However, there were a few "fake outs" where it appeared that pattern was going to happen but it didn't.  The October 30th, 2013 to November 7th was one such fake out.  It did another fake out shortly afterwards on November 29th to December 9th, 2013 where each time the expected "big" down move to follow never happened.

The November 7th high was followed by a big bear squeeze for several weeks.  The December 9th high did produce a few days of selling but it never dropped big like all the other periods where 80-120 points down usually followed.  That drop from the 9th barely took out the first low that hit on the 4th of December.

After the move up first I'd look for about 2060-2070 area to be retested as that was a triple top area before the breakout...

It should last about 2 weeks I'd guess and then back up to start a huge wave 3 rally of some kind.  Looking back again at the weekly chart and that rising trendline from the 2011 low of 1074 SPX I would expect it to hold again should they break through that triple top zone.  The 20MA on it is at 2042 right now and the 40MA is at 2003... which is resting just about on that rising trendline.

If I had to guess I'd say that 3 weeks from now the trendline should be around 2030-2040, but with February having such a strong rally I'm not sure how far down they will allow the market to drop in March, but if they drop that far it should be over with by the 3rd week and allow a rally to start in the last week to recover most of the down move.

This was a twitter comment I read last week and if it's a "factual" statement then any early down move in March has high odds of being erased by the end of March.

On an "elliottwave" count I think we are in some type of smaller wave 4 down now, that should complete on Monday or Tuesday.  Then a final smaller wave 5 up to about 2130 area to end a larger wave 3 up (that started at the 2042 low).  This would then complete a 5 wave pattern up from that 2042 low to an estimated 2130 area high.

Assuming this larger wave 3 up ends up being around 90 points in length it the following larger wave 4 down should be some Fibonacci level of 38.2% or even 50% in depth.  If that count is right then it doesn't look too good for the 80-120 points move happening that I'm thinking will occur.  So for that reason I do think that this chart from Tony Caldaro will be relabeled should my technical analysis be correct by seeing a back test of the triple top area in the 2060-2070 area (or Tony says it's an "acceptable" pullback to still qualify as a wave 4?) 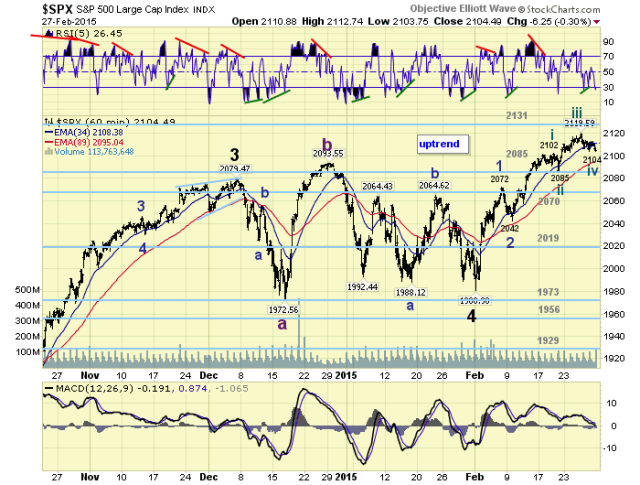 While I like to read what others have as wave counts using EW I just don't find it very accurate on the short term.  The gangsters that run this market don't play by EW rules as we all should know by now.  Try to make sense of that straight up rally from the 1972 low in December 2014 to the 2093 high and give me your EW count there?  Can't be done in my opinion.

Don't get me wrong, I like Tony and find his posts helpful a lot.  But SkyNet (what I call the super computer that manipulates the market) is programmed to steal your money.  So it's well aware of bloggers (and traders) that use technical analysis, elliottwave, fib. levels, astrology, T cycles, etc... to predict the future direction.

Which of course mean...

It's going to fool you by letting these charting methods work for awhile and just when you think you've figured it all out SkyNet just pulls a 180 on your wave count (and/or TA's, Fib. Level's, etc...) and has some crazy move out of the blue that no one can see coming.  The move up from the 1820 SPX low to the 2079 high is a perfect example.

I read many tweets about it and hear people say that they'd never seen such a move in their 40 years of trading!  And other stating that it had never happened before in the past!  This should tell you that the more us sheep have access to various charting methods that used too work before the internet the more likely we are to see "Crazy Ivan" type moves happen as SkyNet has to adapt to us sheep figuring out the next move and being on the right side of the trade for once.

Since SkyNet can't steal the sheep's money and give it to the bankster gangsters that programed it the computer is forced to go hard in one direction or the other to hit all the buy and/or sell stops put in place by the sheep.  What I'm saying here is that a typical wave 4 down should be around the same length as the wave 2 was (2072 down to 2041 on 2/9), and some smaller Fibonacci level like 23.6% or 38.2% as opposed to 50%-61.8% that I'd need for my thoughts of dropping back to that triple top area.

Regardless of the EW count I'm still leaning toward my forecast of a dip to 2085 area Monday/Tuesday, up to 2130 area and then down to 2060-2070 zone to retest the breakout point that has taken us up to the current new highs.  That's my forecast for now and I'm sticking too it!  LOL.

P.S.  I installed a new commenting system so now you can use Disqus, WordPress, Facebook, or Google Plus to leave your thoughts on the market.  I'll set it to default to show the Disqus comments as that's what I've had on the blog since I started it in late 2009.  Unfortunately you'll have to click on each of the 4 icons to read (or leave) comments using each of them as it does not combine them all together.  There could be some comments under each one so click on all of them to see what's going on...  Thanks.