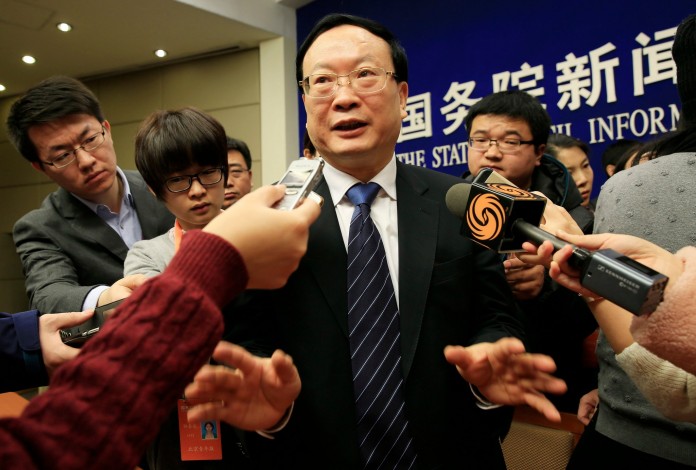 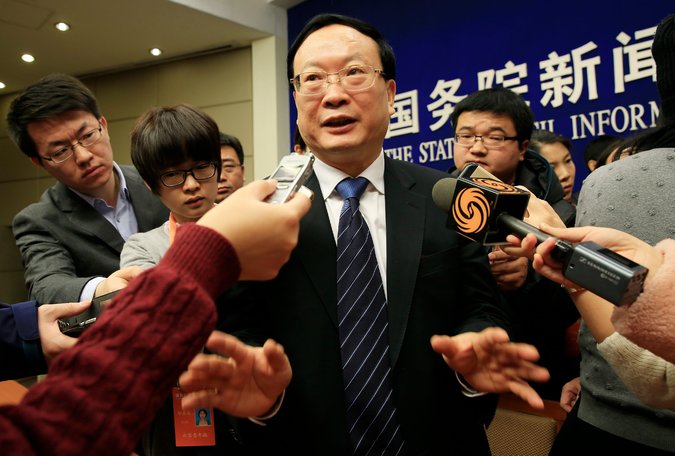 Wang Baoan, the chief of China’s National Bureau of Statistics, at a news conference last week.

HONG KONG — The veracity of China’s economic data has been increasingly questioned as the slowing pace of the country’s growth has startled the world. And a new investigation into the official who oversees the numbers is unlikely to inspire confidence.

The Communist Party’s anticorruption commission announced late Tuesday that it was looking into the head of the country’s statistics agency over what it called “serious violations.”

It is unclear whether the investigation into the agency’s head, Wang Baoan, who became the director of the National Bureau of Statistics of China last April, is related to his current role or to his previous one as vice minister of finance. The commission did not release any further details about the inquiry.

The investigation comes at a delicate time for China, as the country’s shrinking manufacturing sector and falling stock market have unnerved global investors. Any further doubt about its economic figures could paint an even darker picture of the health of the economy, adding to the pain in the markets. Stocks in Shanghai, which closed before the announcement, were off 6.4 percent on Tuesday.

The statistics bureau has a variety of responsibilities that are hard to balance even in the best of times.

The bureau is supposed to provide China’s leaders with an unvarnished assessment of the country’s economic strengths and weaknesses, even while reassuring the public about growth and maintaining consumer confidence. It is also supposed to release enough detailed and accurate information for investors and corporate leaders to make sound decisions about economic and financial prospects.

Few doubt that China has grown enormously over the past three decades. But economists, bankers and analysts who study the numbers believe that the bureau smooths data, underestimating growth during economic booms and overestimating it during downturns.

Many economists are worried that China’s economy is not expanding anywhere close to the nearly 7 percent annual pace that bureau data still show. By some estimates, the pace is half of the official figures.

Those skeptical about the data point, in part, to the underlying numbers.

For example, electricity consumption, long a barometer of economic health and of the veracity of economic statistics, was nearly unchanged last year instead of rising in line with growth in China’s gross domestic product. Some have cited the lack of correlation as a sign of possible fudging in the country’s economic statistics, while optimists have said that the figures may show how China is shifting away from energy-intensive manufacturing.

Still, the bureau has consistently and repeatedly defended its statistics, contending that critics do not adequately understand the data or the Chinese economy. And the market impact of the investigation could be limited by the fact that many were already wondering about China’s data.

“The international credibility of China’s G.D.P. figures is anyway very low, so this probably is not a severe blow,” said Diana Choyleva, the chief economist and head of research at Lombard Street Research, an economic analysis group in London. Lombard estimates that China’s gross domestic product grew 3.2 percent last year, not the 6.9 percent that the National Bureau of Statistics claims.

The reliability of China’s economic data goes to the heart of the market’s concerns.

At the official rate, China grew last year at the slowest pace in 25 years. The government is trying to manage a slowdown, without letting the pain create social unrest.

That can make it hard to discern what’s really happening in the economy. Among other problems, it has a glut of old-line factories that make products like steel, glass and cement. That industrial overcapacity stems from years of debt-financed investment in industries that now show little sign that they can repay those loans.

Beijing is trying to rebalance its economy to focus more on consumer spending and services. But concerns about the pace of change play into the worries about the data.

China produced 804 million tons of steel last year, even as demand faltered. Over all, China’s steel-making capacity was set to reach 1.17 billion tons last year, according to estimates from Fitch Ratings.

The government is taking steps to work through some of the excess. The country’s State Council, or cabinet, decided on Sunday that it would close 100 million to 150 million tons of steel-making capacity. That would mean cutting capacity by an amount similar to the total annual steel output of Japan, the world’s No. 2 steel maker.

The State Council decision, which was released on Monday, also called for large reductions in coal-mining capacity, without providing a target figure.

But it is a balancing act for the Chinese authorities.

Li Xinchuang, the head of the China Metallurgical Industry Planning and Research Institute, told the official Xinhua news agency that the planned steel mill closings could cost 400,000 jobs. “Large-scale redundancies in the steel sector could threaten social stability,” he warned.

The disjointed attempts of policy makers to manage the stock markets and the currency are only adding to skepticism about the economy.

The outflows of capital reflect the uncertainty about the direction of the currency — and about the broader economy. Excluding foreign investment, capital outflows probably rose to as much as $900 billion in 2015, economists at Standard Chartered wrote on Tuesday in a research note.

In response to the outflows, China’s central bank, the People’s Bank of China, has been eating into its reserves at a record pace in recent months. The central bank is trying to prop up the value of the Chinese currency, the renminbi, which is under pressure as the country’s growth prospects weaken.

The situation is forcing the central bank to pump more money into the system, to help banks keep lending. On Tuesday, the central bank added 440 billion renminbi, equivalent to about $67 billion, to its financial system, according to an announcement on its website.

It is all making for messiness in the markets. After the fall on Tuesday, Chinese stocks were at their lowest level in 13 months.