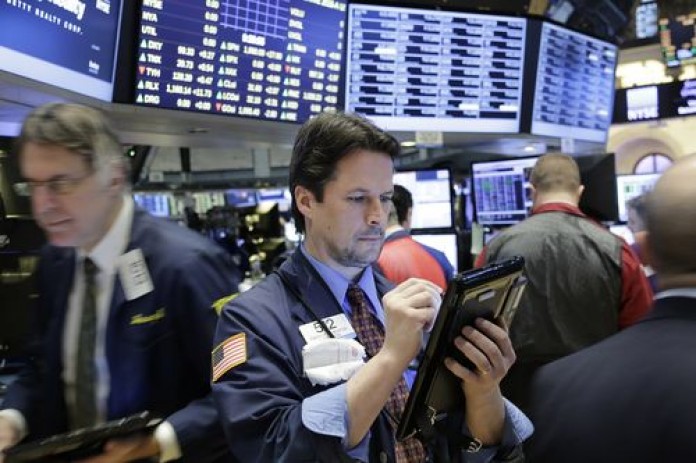 U.S. stocks, still searching for stability after yesterday's sell-off and a rocky start to the new year, surged Tuesday as volatile oil prices climb 6% and move back above $32 a barrel and Wall Street shrugs off another stock rout in China overnight.

Stocks also got a lift from some solid economic data, with November home prices up 0.9% in November, topping forecasts, according to S&P Case Shiller. January consumer confidence also topped expectations, hitting a level of 98.1, above December's reading of 96.3. The strong reading on consumer confidence suggests consumers have not been totally freaked out by the financial markets' wild gyrations in 2016.

Phil Orlando, chief investment strategist at Federated Investors, says the rally has been fueled by the rebound in oil prices, solid earnings and good economic data. But he believes the big reason for the rally is that Wall Street is betting that the Federal Reserve will signal Wednesday at the end of its two-day policy meeting that it may have to dial back its plans for four interest rate hikes this year due to market and economic volatility to kick off 2016.

"We believe a March rate hike is off table and that the Fed will take a more cautious, dovish and data-dependent approach to its rate-hike cycle over the course of the year," Orlando told USA TODAY.

The turbulent year for stocks continues amid a jittery trading environment in which stock movements are increasingly tied to the direction of oil prices, the global economic outlook in the face of slowing growth in China and uncertainty over interest rate policy at home.

U.S.-produced crude rebounded Tuesday and was up 6% to $32.23 a barrel in afternoon trading. Oil, which rallied sharply late last week, relapsed Monday, tumbling more than 5%.

Investors were again digesting a big market sell-off in mainland China, where the Shanghai composite fell 6.4% to its lowest level since December 2014.

Wall Street is also eagerly awaiting the policy statement on interest rates from the Federal Reserve, which will be released Wednesday at 2 p.m. ET at the end of the Fed's two-day January meeting. Investors will be closely looking for any clues that the Fed might suggest the U.S. central bank will be less aggressive on interest rate hikes this year than originally planned due to the persistent volatility in the energy and stock markets around the globe.

When the Fed hiked short-term rates a quarter-point in December for the first time in nearly a decade, it forecast four more quarter-point moves this year. But Wall Street is pricing in one at the moment.

The fourth-quarter 2015 earnings season rolls on today, with Apple, the world's most-valuable company reporting results after the bell.

Results before the opening bell were relatively solid, and included an earnings-per-share beats from drug giant Johnson & Johnson and consumer products maker Procter & Gamble. J&J shares were up 3.8% to $1100.02 and P&G shares up 2.4% to $78.70.

In Europe, stocks were off their earlier lows and closed higher. The broad Stoxx Europe 600 finished up 0.8%, the German DAX rallied 0.9% and the CAC 40 in Paris finished up 1.1%.