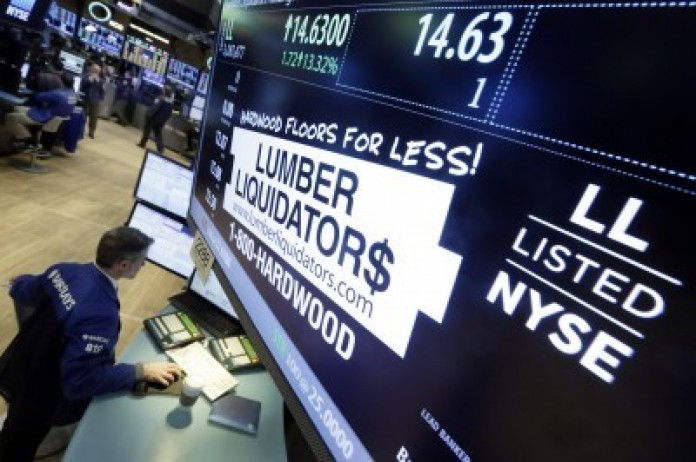 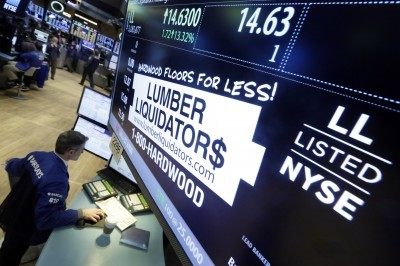 By Andrew Harris and Peter Galuszka February 1 at 7:31 PM

Lumber Liquidators must pay $10 million in fines and penalties for telling U.S. officials that timber for its wood flooring came from Germany rather than the actual source — the habitats of endangered Siberian tigers in southeast Asia.Shares of Lumber Liquidators jumped as much as 17 percent on the news, and trading volatility briefly triggering market circuit breakers.

U.S. District Judge Raymond Jackson in Norfolk on Monday accepted a plea agreement that the company reached last year with federal prosecutors. The deal also calls for five years’ probation and the appointment of an outside auditor.

Jackson warned of the consequences that would follow if the company fails to abide by its terms. “Lumber Liquidators will cease the importation of hardwood if they do not follow the plan,” the judge said.

After the hearing, company representatives left the court without speaking to reporters. In a statement, the company said, “Lumber Liquidators is pleased to put this legacy issue behind us.”

The Toano, Va.-based business pleaded guilty in October to five charges, conceding that some of its timber came from the east Asian habitat of endangered Siberian tigers and not from Germany as indicated on import paperwork. It agreed at the time to pay $13.2 million in sanctions, including forfeitures, the biggest fine ever imposed under the Lacey Act, which criminalizes the importation to the U.S. of timber taken in violation of another country’s laws.

Although that admission of wrongdoing ended a two-year federal probe, it left untouched dozens of federal lawsuits pending in Alexandria, Va., contending the company’s Chinese-made laminate flooring contained excessive levels of formaldehyde. Those allegations were sparked by a “60 Minutes” investigative news report aired in March.

The timber-sourcing problem also originated in China, where many of the company’s suppliers are located. Lumber purchased by the retailer was actually harvested in far eastern Russia and Burma, according to court papers filed by federal prosecutors on Oct. 7.

Lumber Liquidators was charged with making false statements — a felony — and four lesser offenses. The company has said it fully cooperated in the investigation and has since enhanced its sourcing and compliance practices.

The tigers hunt deer and wild boar that feed on Mongolian oak acorns. There are only about 450 of the great cats in existence, according to National Geographic. Amur leopards, which also hunt the east Asian forests, are also endangered, according to the World Wildlife Fund’s website.

As part of its agreement, Lumber Liquidators will pay the federally chartered National Fish and Wildlife Foundation $880,825. Another $380,825 will be dedicated to conservation of Amur leopards and their habitat. An additional $350,000 will be paid to the U.S. Fish and Wildlife Service’s Rhinoceros and Tiger Conservation Fund for the protection of wild tigers and their habitats.