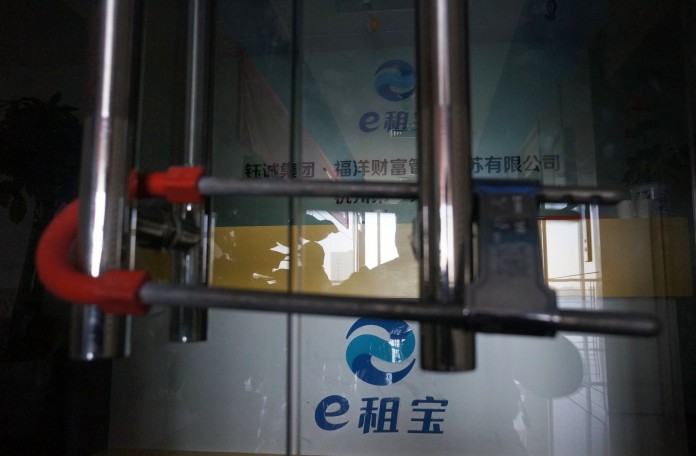 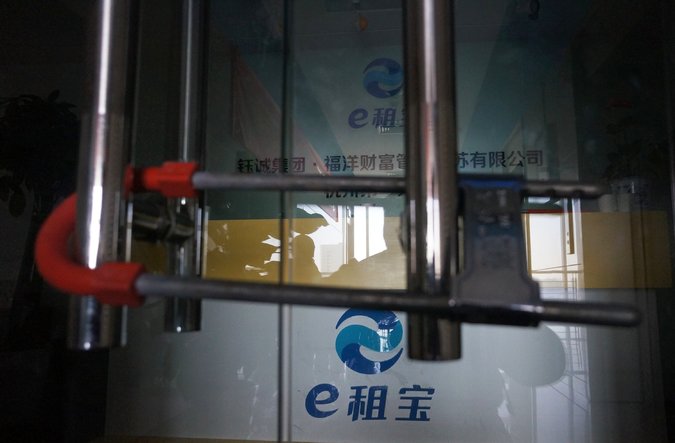 The locked door of Ezubao in Hangzhou, China, in December. Officials quoted by the official Xinhua news agency said Ezubao, a Chinese online finance company, was a “Ponzi scheme.”

HONG KONG — A Chinese online finance company bilked investors for more than $7.6 billion, spent lavishly on gifts and salaries and buried the evidence, according to local authorities who described it as a massive Ponzi scheme.

The accusations throw a shadow over China’s online finance industry, a lucrative area that has nurtured global leaders but that the authorities say also has been the scene of a growing number of frauds and flameouts.

Chinese officials say Ezubao, an erstwhile dynamo of the industry, offered mostly fake investment products to its nearly 1 million investors, according to China’s official Xinhua news agency. It said authorities had arrested 21 people in Anhui, the eastern Chinese province where Ezubao is based, and closed down some of the platform’s operations.

“Ezubao is a Ponzi scheme,” Xinhua quoted Zhang Min, a former executive at the company, as saying. Company officials could not be reached for comment.

A slew of Chinese companies has emerged in recent years to do for customers what the country’s state-owned banks will not. Chinese customers widely use their smartphones to buy groceries or transfer money, while new types of finances companies are offering loans to small businesses, students and others that state banks traditionally ignore.

Ezubao told investors it was a peer-to-peer lender, which matches investors with potential borrowers over the Internet. China’s growth in peer to peer, or P2P, lending has been strong, with Morgan Stanley estimating volumes last year totaled $33.2 billion, surpassing the United States. Morgan Stanley estimates the Chinese market is highly fragmented, with more than 1,500 such lending platforms.

But cases of illegal fund-raising related to peer-to-peer lending have been growing quickly in the past two years, according to local authorities, and officials in December pledged to tighten regulation of the industry. Because of the enormous amounts of funds involved and the large investor base, the collapse of a major online-financing platform could raise concerns over confidence in the security of such investments.

Ezubao has been under official scrutiny for weeks. In December, Xinhua said it was under investigation for suspected illegal business activities.

On Sunday, Xinhua said an investigation by local authorities found that most of the investment products being marketed by the company were fake. Some offered investors annual interest payments of as much as 15 percent.

Instead, the platform, which was set up by Anhui’s Yucheng Group in of July 2014, was used to enrich the top executives that ran it, Xinhua said.

That included more than 1 billion renminbi, or around $150 million, that Ding Ning, the chairman of Yucheng, allegedly spent on items and gifts including real estate, cars and luxury goods, according to the report.

The report added that the salary paid to Ding’s brother, Ding Dian, was increased to 1 million renminbi per month, from 18,000 renminbi, while the company spent as much as 800 million renminbi for payroll in the month of November.

Another executive in charge of risk management at a company affiliated with Yucheng Group said that more than 95 percent of the investment products marketed on the platform were fake, according to the report.

The alleged fraudsters appeared to have gone to considerable lengths to conceal their ruse — literally attempting to bury it from scrutiny.

The Xinhua report said police suspects placed some 1,200 documents or other pieces of evidence related to the scheme in 80 bags and buried them six meters, or nearly 20 feet, underground at a site on the outskirts of Hefei, the capital city of Anhui province.

The police had to deploy two excavators to the site, and it took them 20 hours to unearth the evidence, the report said. According to Xinhua, police described the case as “extremely difficult.”