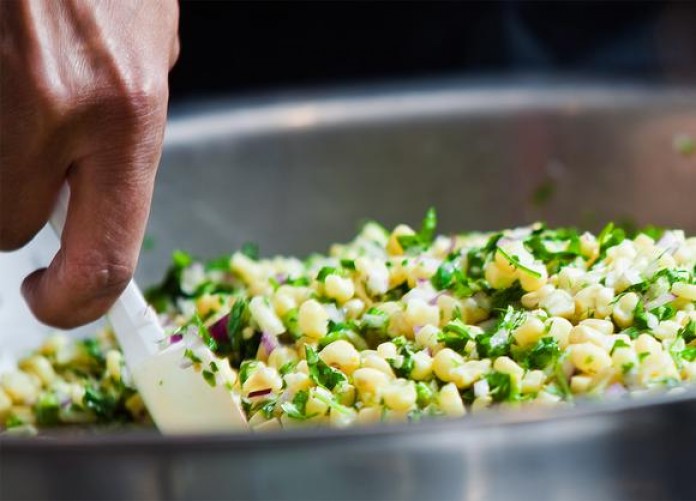 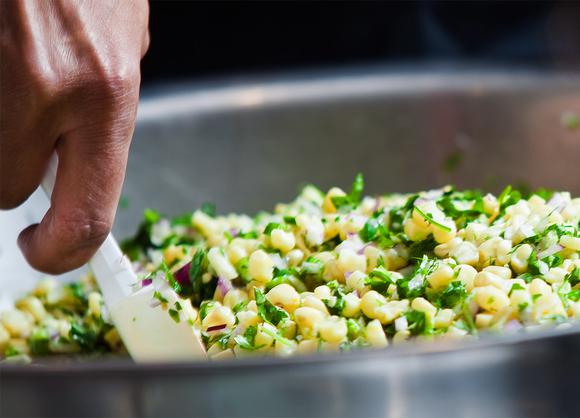 Chipotle has made major changes to how it handles ingredients, but it's unclear when that will bring back customers. Source: Chipotle.

"The fourth quarter was without question the most challenging in our history. But we have responded and implemented an industry-leading food safety program that reduces our food safety risk to as near to zero as possible."
-- Chairman and co-CEO Steve Ells

So began the Chipotle Mexican Grill fourth quarter earnings call, and Ells was certainly right. Concerns about food safety kept customers away in droves in the fourth quarter. Sales fell 15% at restaurants open more than one year, and total revenue dropped 7% in the quarter.

Chipotle isn't the first (and certainly won't be the last) major restaurant chain to have food-safety problems, but it's one of the highest-profile ones, and it has come to represent high-quality, fresh food. Its "Food With Integrity" motto, and its focus on local, organic, and natural ingredients, are key parts of its relationship with its customers. How long it will take the company to rebuild that trust is the million-dollar question.

Let's take a closer look at the company's performance in the quarter and full year, as well as what management has done to address food safety, and to begin rebuilding the brand and bring its customers back.

The impact of the E. coli outbreak in the west, and then the Norovirus incident in Boston were the primary drivers behind the huge drop in sales. Chipotle finished the year with 9.6% revenue growth, essentially all from new restaurant openings, as comparable sales were flat for the year. Through the end of the third quarter, Chipotle's net sales were up 15.3%, and comps were up 5.5%. That's how bad Q4 was, erasing over 5% in growth.

Some key full-year profitability metrics that also took a big hit from a terrible Q4:

Steps to address safety
Ells outlined several key steps the company has implemented in its food preparation and supply chain to reduce the risk of foodborne illness going forward:

Co-CEO Marty Moran continued describing the steps Chipotle has taken to continue supporting the company's focus on food safety and bringing back customers. The company has ramped up in-restaurant auditing, with weekly audits performed by in-house employees, and a third-party performing audits no less than quarterly. The third-party auditor score will account for half of store-level manager's bonuses, while the other half will be tied to sales recovery.

CDC E. coli investigation complete, but criminal probe expanded
On Feb. 1, the Centers for Disease Control and Prevention ended its investigation, saying that the E. coli outbreak that started last fall appears to be over, but an investigation by the U.S. Attorney's office for the Central District of California has been expanded. Chipotle received an expanded subpoena, requesting information about communications related to food safety, going back as far as 2013, according to Moran on the earnings call.

Moran made it clear that the company will cooperate fully with the investigation, and that he was confident that the investigation -- which is aimed at making sure Chipotle met its obligations under a federal food safety statute dealing with selling food that could be harmful -- would find no wrongdoing.

Ready to reach out to customers
At the height of the food safety scare, a survey of Chipotle customers indicated that around 60% who were aware of the issues would eat there less often. However, recent surveys have shown a leveling off of negative sentiment, and historically, companies that have dealt with similar issues see customers return once it's clear the issues have been dealt with.

With that in mind, Chipotle will launch a marketing campaign that CFO Mark Crumpacker described as the "largest in the company's history" and would include print, outdoor signage, as well as social and Web, scheduled to run from early February through June.

Hartung also said that the campaign -- with one small exception -- would not mention food safety or the recent incidents, instead focusing on the fresh, high-quality ingredients and delicious food the restaurant has been known for.

The campaign will also have a major direct marketing component from early February through mid-May, that will use both mail and social media.

Based on how customers respond, Chipotle will continue marketing throughout the rest of 2016. Crumpacker said the company will spend significantly more on marketing than in previous years -- about six times last year's Q1 spend as a percentage of sales, just to start the program.

Sales and profits could get worse before they get better, but management is focused on the long term
The impact of the negative publicity and food safety concerns has continued to weigh heavily on Chipotle. CFO John Hartung said comps in January were down 36%, even worse than the 34% comps decline following the Norovirus incident in Boston in December.

Hartung also said that labor and P&L management at store levels would be less of a focus as the company attempts to regain customers. To paraphrase, the company would rather have too many people on hand than risk having customers return and not be able to meet their expectations.

In other words, Chipotle management is investing in a long-term recovery and accepting that its costs will rise in the short term. However, the company isn't willing to let the customer experience suffer, simply to reduce costs while business languishes.

There's almost certainly going to be more short-term pain for the company and for shareholders, but if its plan to rebuild trust and bring customers back works, it will almost certainly pay off in the long term.