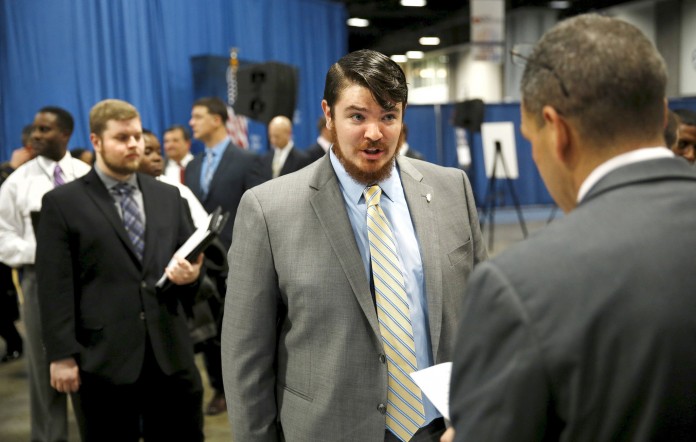 The American economy’s jobs machine cooled in January but still performed well enough to push unemployment to an eight-year low and deliver some much-needed wage gains for ordinary workers.

The Labor Department said Friday that payrolls rose by 151,000 in January, a falloff from the year-end sprint that helped make 2015 the second-best year for job creation since the late 1990s.

Analysts said that the slowdown might push the Federal Reserve to postpone another interest rate increase when it meets next month, but signs of a tighter labor market suggested that policy makers would be looking closely at incoming data.

“We are likely to have to two rate hikes this year, probably in June and December,” said Diane Swonk, an independent economist in Chicago, “but the wage gains are important, so March can’t be ruled out.”

Given the big jump in payrolls late last year, as well as much colder weather last month after the warmest December on record, some payback in January was to be expected. 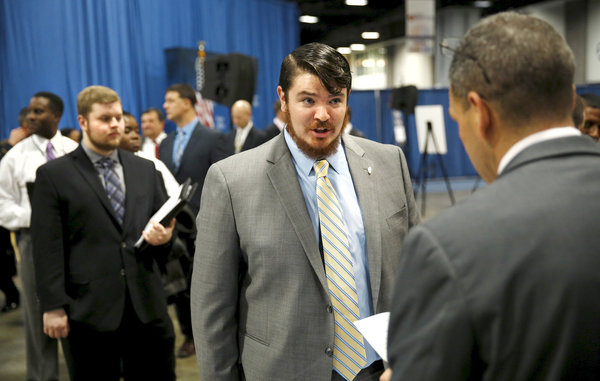 A job applicant at a military job fair in Washington in January. The economy added 2.65 million jobs last year, but many Americans say they do not feel it.

“The headline number was a bit of a disappointment but not too bad, and the rest of the report suggests steady improvement,” said Michael Hanson, a senior economist at Bank of America Merrill Lynch. “The financial markets are leery, but the labor market still looks like it’s continuing to grow.”

President Obama, who has been frustrated that he has not received the credit he feels he deserves for the country’s improving economy, said the jobs numbers were more signs of progress.

“After reaching 10 percent in 2009, the unemployment rate has now fallen to 4.9 percent even as more American joined the job market last month,” he said. “Americans are working.”

Investors have been edgy lately, concerned about weakness in China, plunging oil prices and a series of reports suggesting that the American economy may have hit an air pocket in recent weeks.

The latest figures on the job market — plus a slight fall in the unemployment rate to 4.9 percent, from 5 percent in December — suggest that some modest strength persists. January was the first time since February 2008 that the unemployment rate fell below 5 percent, just before the collapse of Bear Stearns set the stage for the financial crisis.

To be sure, markets are mercurial, foreseeing recessions that never come to pass and assuming the good times will go on right up until the music stops.

“We don’t think the economy is sliding into a recession,” said Michael Gapen, chief United States economist at Barclays. “We do think the unemployment rate will continue to drift lower and that will support wage growth.”

Last month, average hourly earnings rose 0.5 percent, leaving wages up 2.5 percent over the last 12 months. That was the best showing since January 2015, and it suggested some of the benefits from the falling unemployment rate were beginning to flow to ordinary workers.

For all the concerns about growth in 2016, the Main Street economy appears to be on a fairly solid footing.

Since the beginning of 2010, the American economy has gained nearly 14 million jobs, with healthy increases more recently in better-paying sectors like professional and business services as well as construction. Even as employers had been hiring at a healthy pace, they were only sparingly handing out substantial raises.

All of these crosscurrents — steady hiring but anxious markets, falling unemployment but flat wages — underscore the delicate task now facing the Fed.

The central bank raised short-term interest rates in December, confident that the economy could withstand the impact of a quarter-point tightening in monetary policy after almost a decade of near-zero rates.

But the sell-off in global stock markets, as well as disappointing retail sales and a gloomier trade balance, has prompted some experts to conclude that the Fed won’t move imminently.

Ms. Swonk said the report for January has ammunition for Fed officials who favor a rate-tightening sooner rather than later, as well as those who are more dovish. The jump in average hourly earnings last month might be evidence that wage pressures are building, ultimately setting off more inflation, while the slowdown in payroll growth is an indicator that the economy is nowhere near overheating.

The overall picture in Friday’s report obscures spots of real strength, along with some real pain.

In a reversal after weakness in the second half of 2015, the manufacturing sector surged last month, adding 29,000 jobs. The strong dollar and weak export markets in Asia and Europe had hurt factory employment, but some experts suggested that the worst may now be over.

“It’s a sign the manufacturing sector may be stabilizing,” said Scott Anderson, chief economist at Bank of the West in San Francisco. While the factory sector in the United States is not nearly the size it once was, it is an important creator of better-paying jobs for less-educated workers who have fared poorly in the recovery.

The construction industry, another source of higher-paying jobs for blue-collar workers, also held up well, adding 18,000 jobs, despite colder weather, which can hold up new building.

The biggest surprise, Mr. Anderson said, was that after months of strength, the service sector faded, highlighted by a 38,500 drop in education services.

The overall figures for job creation, as well as the sector-by-sector data, are likely to be revised in future months as more data comes in. On Friday, the big job gain in December was revised downward by the Labor Department, while November’s payroll data was revised upward, reducing payrolls by 2,000 for the final two months of 2015.

The three-month trend in job creation, which economists tend to regard as more meaningful because it smoothes out the month-to-month fluctuations, stands at 231,000, which is more than enough to keep the unemployment rate moving lower.

The proportion of Americans who are in the labor force, which has been stuck at lows not seen since the late 1970s, ticked up slightly in January.

As has been the case since the current recovery began in mid-2009, the most-educated workers are doing best in today’s job market: The unemployment rate for college graduates was unchanged in January at 2.5 percent, while joblessness ticked upward to 7.4 percent for people without a high school diploma.

For the winners, especially in parts of the country where unemployment is very low, Wall Street’s nervousness seems misplaced.

“It’s a very tight labor market, and we continue to hire,” said Dave Rozenboom, president of First Premier Bank in Sioux Falls, S.D. “The economy is as strong as it has ever been here.”

With a state unemployment rate of 2.9 percent in late 2015, employers are feeling pressure to increase wages to attract and retain workers, he said.

Starting salaries for workers who handle credit card customer service and collections recently went to $13 an hour from $11.75, Mr. Rozenboom said. Hospitals and construction firms in the region are also hiring.

Sioux Falls’s situation may be unusually strong, but the upward trajectory in employment over all in the United States suggests to some analysts that the owners of smaller businesses know something that the Wall Street pessimists don’t.

“We think the recession talk is overdone and that labor markets are the primary signal that suggests the economy is healthier than people think,” Mr. Gapen of Barclays said. “There is weakness in places tied to energy and in the industrial Midwest, but it’s not widespread and doesn’t suggest there is a more systemic problem.”