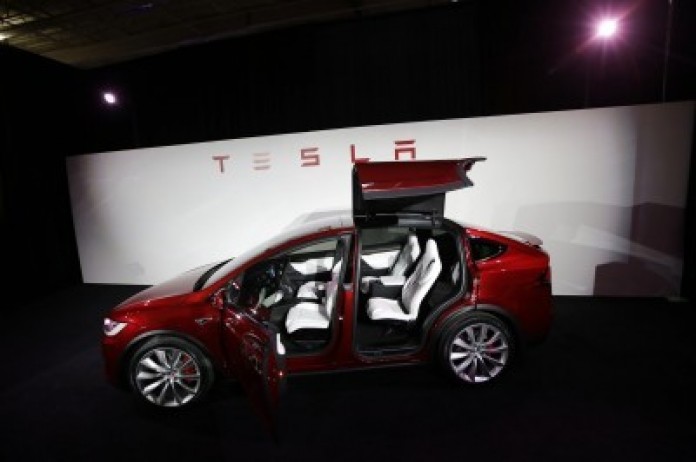 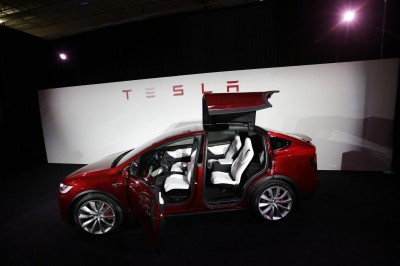 FILE - In this Tuesday, Sept. 29, 2015, file photo, the Tesla Model X car is introduced at the company’s headquarters in Fremont, Calif. Tesla reports financial results on Wednesday, Feb. 10, 2016.
DETROIT — Tesla Motors posted its 11th straight quarterly loss Wednesday, and its results badly missed Wall Street’s forecasts. But the electric car maker’s shares soared anyway on news that its lower-priced Model 3 sedan is on schedule to be released next year.
Tesla said it will unveil the much-anticipated $35,000 car on March 31 and expects to start production at the end of 2017.

CEO Elon Musk said he’s not worried about competition from the all-electric Chevrolet Bolt, which will have a similar price tag and range and will go on sale at one year before the Model 3. He noted that Model S sedan sales rose in 2015 even as luxury competitors like the Audi A7 and Lexus LS fell.

“Tesla is approximately doubling its cumulative sales every year. I think that’s pretty exciting and unusual,” Musk said on a conference call with analysts and media.

Tesla’s shares had fallen in recent days as investors worried that the Model 3 would be delayed. Investors also weren’t happy with the slow ramp-up of Tesla’s new Model X SUV. The company delivered only 206 SUVs in the fourth quarter and it curtailed production last month to work out some quality issues.

But Tesla said Wednesday it’s accelerating Model X production and expects to make 1,000 SUVs per week by the second quarter.

Musk said the past few months have been “excruciating” as the company dealt with various hiccups, including problems with the Model X’s chrome door strips and large front window. He said the company added too many new features at once to the X.

Tesla shares rose 9 percent in after-hours trading to $157. They are down 40 percent this year through the close of regular-session trading Wednesday.

Palo Alto, California-based Tesla, which was founded in 2003, has never made a full-year profit. But the company said it’s on track to be cash-flow positive this year. It also expects to achieve an adjusted full-year profit despite a planned investment of $1.5 billion in additional production capacity in Fremont and new cell production at its battery factory in Nevada. Tesla also plans to open 80 additional service and retail centers and 300 fast-charging Supercharger stations.

In the fourth quarter, Tesla’s net loss more than doubled to $320 million, hurt by the lower-than-planned Model X production. The loss, of $2.44 per share, compared to a loss of 86 cents per share in the same quarter a year ago.

Tesla Motors Inc. says unadjusted figures do not reflect its true performance because accounting rules limit how it records revenue for leases. On an adjusted basis, the company lost $2.30 per share for the year, missing Wall Street’s estimate of a $1.25 per-share loss, according to FactSet. Its fourth-quarter loss of 87 cents also far surpassed Wall Street’s estimate of a 16-cent loss.

Tesla’s adjusted full-year revenue of $5.29 billion was slightly below analysts’ forecast of $5.38 billion.