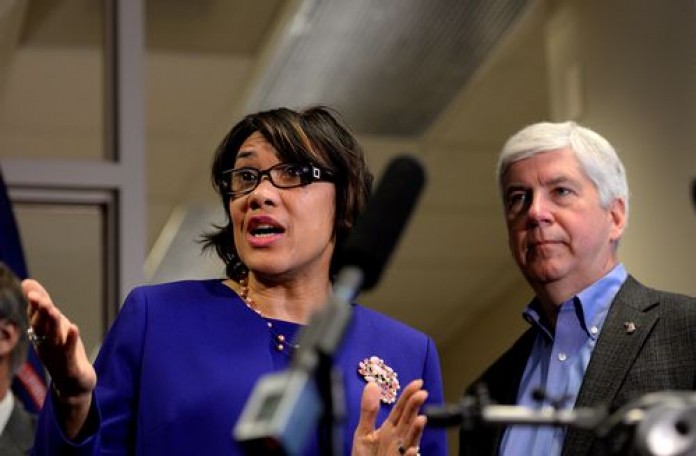 “We’re going to get this done -- and done quickly -- by any and every means necessary,” Weaver said

Gov. Rick Snyder and Flint Mayor Karen Weaver meet with the press after a meeting to discuss the next steps in regards to Flint's water crisis last week.(Photo: Dave Wasinger, Lansing State Journal)

Simmering tensions between city and state officials over how quickly to replace lead pipes in Flint flared Wednesday after officials announced different approaches to solving the city's drinking water crisis.

Flint Mayor Karen Weaver said she appreciates support from Michigan Gov. Rick Snyder to move quickly to replace Flint’s lead pipes and his recent budget proposal to partially fund the project. But the mayor said she would not agree to allow the governor’s engineering firm and contractors to do the work.

The governor announced his plan in a news release Tuesday night and is expected today to offer additional details.

Weaver said she welcomed the governor’s interest in working with the city to coordinate removal of the first 30 lead service lines, but noted that much more needs to be done by Snyder and others to secure full funding for her plan.

Weaver's administration intends to begin replacing lead pipes in Flint starting next week. She called Snyder to pressure the state Legislature to move immediately to approve funding for the first phase of her $55 million Fast Start lead pipe replacement plan.

“We’re going to get this done — and done quickly — by any and every means necessary,” Weaver said in a statement.  “The people of my city have simply run out of patience, and I have a moral obligation to act.”

Weaver said in a news release that she is working with water infrastructure experts from the Lansing Board of Water and Light to train local Flint workers on lead pipe removal at a vacant property in Flint owned by the Genesee County Land Bank. The training exercise is set to begin next week, she said. House-by-house lead service line removal and replacement operations targeting high-risk households across the city will begin afterward.

On Tuesday, Snyder said the state had signed an agreement with Flint-based engineering firm Rowe to update a study of the water system to identify and assess the city's water lines made from lead. The work would also instruct the firm to help test 400 sentinel sites for lead in drinking water, as well as begin to remove lead lines at 30 sites as a pilot program, according to Dave Murray, the governor's spokesman.

But the mayor appears to be charting her own course. Late last week, she ousted her police chief, fire chief and city administrator.

Elected last year and recently granted additional powers by a financial control board set up by the state, Weaver said Wednesday that she is pleased that her Fast Start plan has been endorsed by Virginia Tech water expert Dr. Marc Edwards, who is hailed for his role in uncovering the lead levels in Flint’s water supply and has testified before Congress on lead contamination in municipal water systems.

“I will not accept anything less than full removal of all lead pipes from our water system,” Weaver said in a statement. “I continue to hear from Lansing that the people of Flint should wait to see if pipes can be ‘coated.’ I call on Gov. Snyder to end that discussion, and to commit fully to getting the lead out of Flint.”

During the training exercise next week, the Lansing public works department will demonstrate its technology for removing and replacing lead pipes with new copper pipes in half the time and at half the cost of traditional methods, according to the mayor. The Lansing public water and electric utility has refined its technique by removing more than 13,500 lead pipes in Michigan’s capital city over the last 12 years, according to city officials.

Weaver said she is also working closely with the White House and Flint’s representatives in the Michigan Legislature and U.S. Congress to secure full funding for her lead pipe removal project, as well as long-term funding to fully repair the city’s devastated water-distribution system. She called on state and federal lawmakers to move quickly to approve emergency funding for her project while long-term repairs to Flint’s water-distribution system are evaluated.

“Lansing and Washington need to understand that the first and most critical priority is an emergency public health intervention to start getting rid of these pipes immediately,” Weaver said. “Then we can figure out exactly what it will cost over the long term to fix our broken water-distribution system. If we have to replace major components or even the whole system, it will cost an enormous amount of money. Everyone needs to be prepared for that possibility. Let’s start a serious conversation about where that money is going to come from while we get to work removing the pipes.”

If funding to ramp up her Fast Start project is not secured quickly from the state or federal government, Weaver said she may have to take her case directly to the national and international audience.

“If the state and federal governments won’t pay to restore safe drinking water and dignity to the people of my city, I may have to go on national TV and crowdsource the funding on the Internet,” Weaver said.

Flint's switch to using the Flint River as its water supply in April 2014 was followed almost immediately by complaints from residents about discolored, pungent water that had caused a number of ailments. Local and state officials insisted for months the water was safe to drink but reversed course after independent testing discovered unsafe lead levels throughout the system believed to be caused by leaching from lead piping.

Flint is now under a state of emergency because of elevated lead levels that continue to be found in drinking water supplied to city residents. Officials in the Snyder Administration have said that they hope to restore drinking water to the city in stages, with a full assessment of the system completed by mid-April.

Of the city's 56,000 land parcels, about 5,200 have lead service lines, officials have said. But roughly 25,000 parcels have piping of an unknown origin. Determining how much of that piping is lead is a crucial step for any remediation.

The governor's team has advocated a more deliberate approach to assess the condition of the entire water system in Flint first, in order to make sure any pipe removal does not increase the chances of additional lead leaching into the drinking water.

Snyder sent a supplemental budget request to the Legislature, including $25 million to be used for water infrastructure, like pipe replacement in Flint. The governor said Tuesday that other resources could be tapped for additional funds to replace pipes.

A key member of that team is retired National Guard Brig. Gen. Michael McDaniel, who has said he thinks replacing all of the city's lead pipes could be done within a year by 32 crews. McDaniel — who is assisting in coordinating activities between the city, the Lansing Board of Water and Light, state and federal agencies, and other stakeholders — said the project could begin within the next month. But McDaniel reiterated the plan is still in its early phases and much of it is based on "assumptions."

“Flint Mayor Karen Weaver wants this work to be completed as quickly as possible to protect Flint residents,” McDaniel said in a statement Tuesday. “We’ve been working in partnership to identify the areas that need to be addressed immediately and remove lead pipes, bringing peace of mind to Flint families and make sure this never happens again.”

The Flint firm hired by the state is no stranger to the city's water system.

In July 2011, the engineering firm Rowe completed a report titled "Analysis of the Flint River as a Permanent Water Supply for the City of Flint," for then-Mayor Dayne Walling. The report noted that treating river water on a daily basis was going to be challenging and more expensive than treating lake water, but concluded it could be done if improvements to Flint's water treatment plant were made.