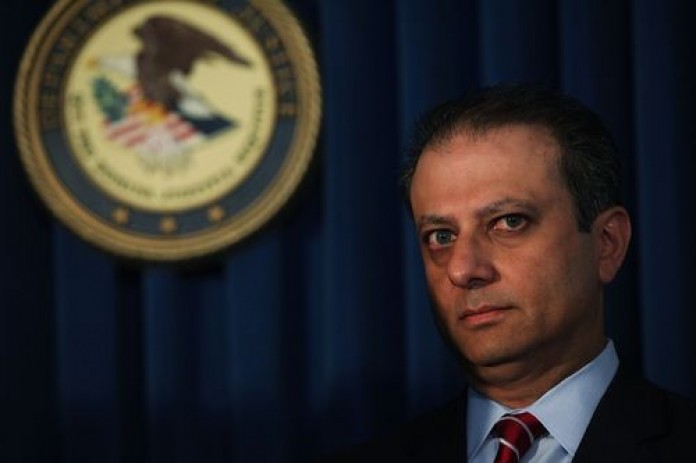 Preet Bharara, the United States attorney for the Southern District of New York.

WASHINGTON — One the world's largest telecommunications company's and its subsidiary agreed to fines and forfeitures with U.S. and Dutch authorities totaling more than $800 million to resolve a long-running bribery scheme involving a government official in Uzbekistan, Justice Department officials announced Thursday.

Manhattan U.S. Attorney Preet Bharara said VimpelCom, headquartered in Amsterdam, and its Uzbek-based subsidiary Unitel LLC, made "bribery a foundation of their business model” throughout Uzbekistan.

More than $114 million in bribes, according to federal prosecutors, was funneled to the Uzbek official during a six-year period by the firm, which issues publicly-traded securities in the U.S. The companies concealed the bribes through various payments to a shell company that some VimpelCom and Unitel officials knew was owned by the recipient of the bribe payments.

"The bribes were paid on multiple occasions between approximately 2006 and 2012 so that VimpelCom could enter the Uzbek market and Unitel could gain valuable telecom assets and continue operating in Uzbekistan,'' according to the agreement.

The case, brought under the Foreign Corrupt Practices Act, represents one of the largest such efforts to recover proceeds from a foreign government official, Assistant Attorney General Leslie Caldwell said.

Federal prosecutors said VimpelCom admitted that it falsified its books and attempted to conceal the bribery by classifying payments as equity transactions, consulting fees another transactions. When the company's board of directors sought to assess the firm's corruption vulnerability by hiring outside legal counsel, some company officials withheld information rendering the assessment "worthless.''

VimpelCom CEO Jean-Yves Charlier said resolution of the matter has been a "top priority.''

"While this has been a very challenging experience for our business and our employees, we are pleased to have now reached settlements with the authorities,'' Charlier said. "The wrongdoing, which we deeply regret, is unacceptable. We have taken, and will continue to take, strong measures to embed a culture of integrity across the group.''