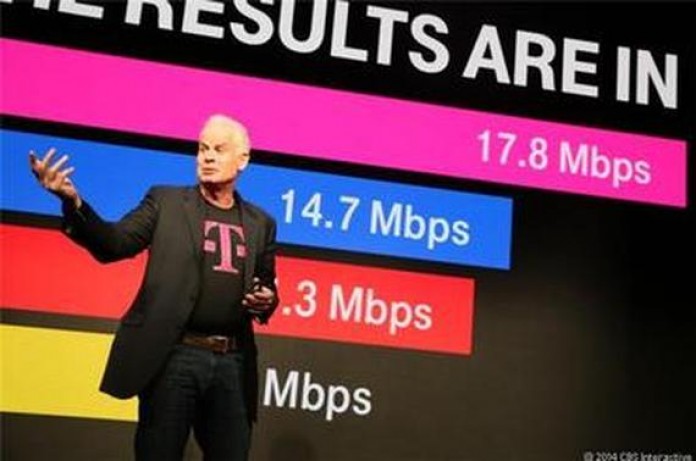 T-Mobile is gobbling up low-frequency radio airwaves so that video of "The Walking Dead" playing on your phone doesn't stall when you walk into your basement.

T-Mobile on Wednesday said it had acquired more of the spectrum in the low-frequency 700 MHz band as it seeks to catch up to rivals Verizon Wireless and AT&T in coverage. The company plans to put the spectrum to use in the next 12 to 18 months, and said it would allow it to reach 48 million more people.

The additional spectrum should extend its coverage footprint and improve service indoors, two issues that long dogged T-Mobile subscribers. It's part of an arms race by the carriers in stocking up spectrum, all to ensure that your phone calls don't drop and your mobile videos stream stutter-free.

T-Mobile has been shaking up the wireless industry for more than two years, offering no-interest device financing, free international data, unlimited access to video streaming, and plans without service contracts. On Wednesday, it reported a fourth-quarter profit of $297 million, or 34 cents a share after adding 2.1 million new customers.

Historically, the Bellevue, Washington, company has offered poor coverage outside of urban areas as well as inside buildings. But the company has worked quickly to close the gap by acquiring low-frequency spectrum that allows signals to easily penetrate through obstacles like walls and offers wider coverage.

Executives say the low-frequency spectrum already in use has helped the company retain customers, catapulting it to the top of customer satisfaction surveys from companies like JD Power and Associates.

T-Mobile has made huge strides in the past several quarters reducing its so-called churn rate, or the rate at which customers drop its service. For the fourth quarter of 2015, this rate fell to 1.46 percent for is postpaid customers, or customers who pay their bills at the end of the month. A year ago, its churn rate was 1.74 percent.

"It's seems obvious, but this is one of the things that's driving up satisfaction and driving down churn," T-Mobile's CEO John Legere said on the company's earnings call Wednesday.

The latest purchase is part of T-Mobile's ongoing strategy to obtain as many spectrum licenses in this low-frequency range as it can to bolster its coverage and reliability. But T-Mobile executives admit that the deals it's been making on the secondary market won't be enough to keep up with demand and give consumers the coverage they need wherever they go.

"The strategy has been to leverage spectrum we already have and buy what we can on the secondary market," Neville Ray, T-Mobile's chief technology officer, said in an interview. "But there isn't much left to run at."

For that, T-Mobile is hoping to acquire a significant amount of spectrum in the government's upcoming auction of airwaves taken from the TV broadcasters.

"We've always said whatever spectrum we get in the secondary market is an enhancement," Ray added. "That's why we have filed to participate in the upcoming auction."

T-Mobile lobbied aggressively for rules in the auction that favor smaller players such as itself. A few months ago, the company looked like it would dominate bidding on spectrum the FCC had carved out especially for smaller players. But now the company will likely face stiff competition from some deep-pocketed new rivals.

Cable giant Comcast confirmed earlier this month it plans to participate in the auction. There are also several investment firms that will be bidding on this spectrum.

T-Mobile has said previously it will go into the auction with a $10 billion budget. With additional bidders, prices are likely to be high, which may hamper how much spectrum T-Mobile is able to acquire.

Executives were unable to address specific questions about the auction, due to the FCC's quiet period rules. But chief financial officer Braxton Carter said in an interview that the company has a lot of experience bidding in competitive government spectrum auctions.

"In the past, we've have been smart and prudent in how we tackle auctions," he said. "And we haven't allowed ourselves to bid irrationally."