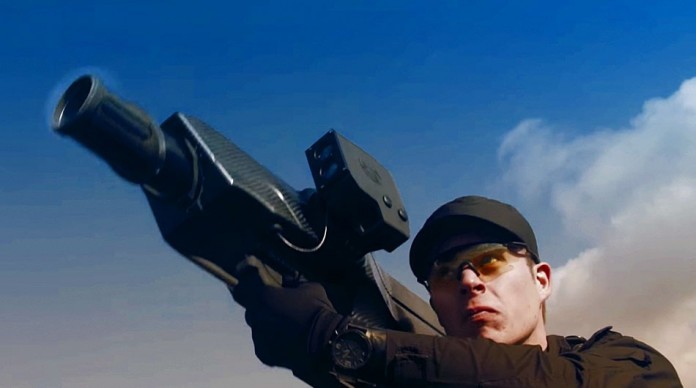 Nearly every month a new, more advanced drone seems to pop up showing off new designs and performance features.

Similarly, security companies are attempting to keep up with those advances with drone-stopping countermeasures, the latest being the SkyWall.

UK-based OpenWorks Engineering is offering the device — which looks like a gun from a flashforward scene in Terminator 2 — as a means to neutralize drones that spy on celebrities, compromise the security of government officials and are used to transport illegal contraband.

"SkyWall gives you a physical barrier in the sky," reads the company's description of the device. "The system can be rapidly reloaded, allowing multiple drone threats to be engaged by a single operator."

The most important feature of SkyWall is that it not only stops the flight of a drone but, once it captures a drone, it deploys a mini-parachute, bringing the drone back to earth with no damage, allowing authorities to keep it intact for subsequent investigation.

In terms of accuracy, the SkyWall, which is essentially a compressed air launcher in gun form, uses a laser-equipped SmartScope to acquire the target and shoot a smart projectile at the drone. Once the smart projectile reaches the drone, it releases netting at just the right moment to stop the drone's flight.

The device has a range of about 330 feet, operates with what the company describes as "near silent" noise level and can be reloaded in just eight seconds. OpenWorks showed off how the system works in a video (above) posted on Thursday.

Scheduled to be publicly demonstrated next week at the UK Home Office’s Security and Policing Event, the company hopes to see the first commercial versions of the prototype device in use by the end of 2016.

Have something to add to this story? Share it in the comments.