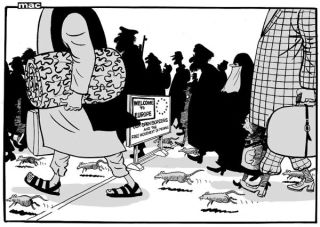 The company that owns the British tabloid the Daily Mail—and its highly trafficked website—is exploring a potential bid for Yahoo with the help of a private equity backer, the Wall Street Journal reports (paywall). While the Daily Mail & General Trust is just one of dozens of players that may bid for Yahoo, if the company succeeds, news on the internet may never be the same.

Any combination is likely to push the Daily Mail’s trademark brand of incendiary, lightly sourced, heavily borrowed tabloid journalism to Yahoo’s one billion worldwide monthly users. Yahoo’s over 50 local websites, many of them in local languages, help the company draw more total users than any other online company in the world after Google, YouTube, Facebook, and the Chinese search engine Baidu.

The Daily Mail’s high volume of articles, attention-grabbing headlines, and photo-heavy articles have helped it become one of the world’s most-viewed English-language news sites, with more traffic than the New York Times, the Guardian, Huffington Post, and Buzzfeed, according to some measures.

But the company’s numerous critics call it “shameless” and say its model relies heavily on taking other media outlets’ work, printing anonymously sourced gossip, trotting out sexist tropes, and often fanning the flames of religious, racial, and other divides. The company has been the subject of numerous lawsuits in recent years.

After the Daily Mail reported Baria Alamuddin opposed her daughter Amal’s marriage to actor George Clooney because he was not Druze (a Middle Eastern religion) and suggested Amal or Clooney could be killed if they were wed, Clooney responded publicly in USA Today.

The entire story was a fabrication—the elder Ms. Alamuddin is not Druze, nor had she been to Lebanon where the story claimed she was telling friends of her disappointment. But claiming the marriage could result in the death of the bride was another issue:

The irresponsibility, in this day and age, to exploit religious differences where none exist, is at the very least negligent and more appropriately dangerous. We have family members all over the world, and the idea that someone would inflame any part of that world for the sole reason of selling papers should be criminal.

After the Daily Mail apologized and retracted the story, he issued another scathing statement, calling the paper “the worst kind of tabloid” that “makes up its facts” and willingly prints a “premeditated lie.”

In November of last year, the Daily Mail published a cartoon showing refugees and scurrying rats entering Europe. It was compared to Nazi-era propaganda.

What DailyMail.com does “goes beyond anything practiced by anything else calling itself a newspaper,” one former writer based in New York wrote on Gawker:

I saw basic journalism standards and ethics casually and routinely ignored. I saw other publications’ work lifted wholesale. I watched editors at the most highly trafficked English-language online newspaper in the world publish information they knew to be inaccurate.

The Daily Mail is suing Gawker for defamation over the piece.

The DMGT, as the paper’s publicly traded parent company is known, is exploring two options, according to the Wall Street Journal.

DMGT executives have not found a private equity partner yet for any deal, and at this stage are merely in talks with six possible backers, the Journal reported.